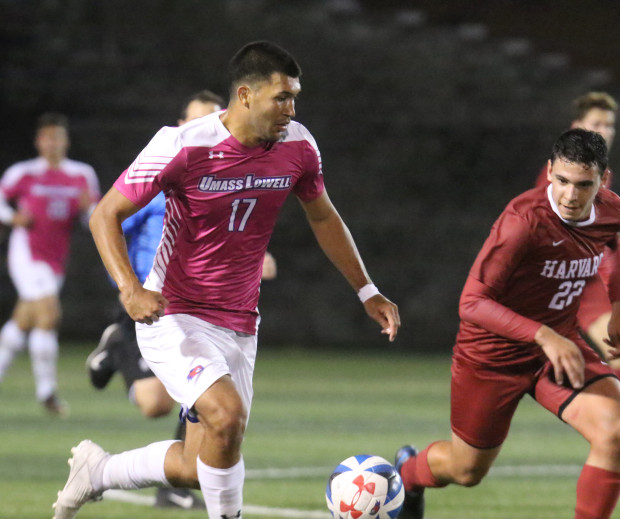 (Photo courtesy of the Lowell Sun)

The UMass Lowell River Hawks (7-2-1) claimed victory against the Harvard Crimson (0-6-1) Tuesday night at Cushing field. One goal from forward Alejandro Osorio, assisted by dynamic midfielder Roko Prsa, would be all Lowell needed to gain all three points on a gorgeous fall night for soccer.

In their pinked-out jerseys, in support of breast cancer awareness for the month of October, the River Hawks came flying out the gates in style. Lowell would take advantage of Harvard’s bad run of form and show great attacking impetus in the opening stages of the match. The River Hawks’ attacking sense was greatly supported by their unrelenting press on the night.

Often leading the press in the opening stages and scoring a beautiful header to secure the win, Osorio looked dangerous throughout the night. The Crimson had a rough time when facing the press, often lacking composure on the ball, and venting their frustrations on the night on each other. Seldom inviting a reaction from UMass Lowell’s starting keeper Patrik Gujic, looking as comfortable on the ball as ever, Harvard looked shaky on it. The Crimson attack failed to match Lowell’s cutting edge on the night.

The UMass Lowell River Hawks are currently on a streak of five straight games ending 1-0 in their favor. Although the results are in favor of Lowell, delving deeper does highlight an issue with finishing. Despite a dominant performance on the night, Lowell were only able to put eight shots on target from a total of 21. This is a result of poor shot location from the River Hawks who often look to hit the target from distance or hit the byline for a cross into leading goal scorer forward Alves or Osorio, respectively. Their inability to create clear cut chances on goal can prove detrimental as they go away to Albany—who according to Figueroa, “thrive on half-chances.” The sooner Figueroa’s squad sort out their inability to finish from key passes, the more threatening they’ll be going into tougher conference matchups.

Standout performers on the night for UMass Lowell were outside midfielder Abdi Shariff-Hassan on the wing and midfield maestro Prsa who continues to show his class in the middle of the park, claiming the assist for Osorio’s decider. Proving too much to handle for opposition full-backs, Shariff-Hassan was responsible for several of the chances created in the first half. His output was missed when he was subbed off. Osorio was arguably the best forward playing on the night, taking two shots in the box and converting that vital header from Prsa’s crossing. Although playing limited minutes, he showed great improvement from past performances where he was often playing below his own expectations.

According to UMass Lowell Athletics, The River Hawks, in their first loss in over a month, would go on to unfortunately have their six game winning streak snapped in conference play against the Albany Great Danes in New York this past Saturday night.

The River Hawks return to action Homecoming weekend, Saturday, Oct. 19, against the University of New Hampshire Wildcats at 4 p.m. at Cushing Field.