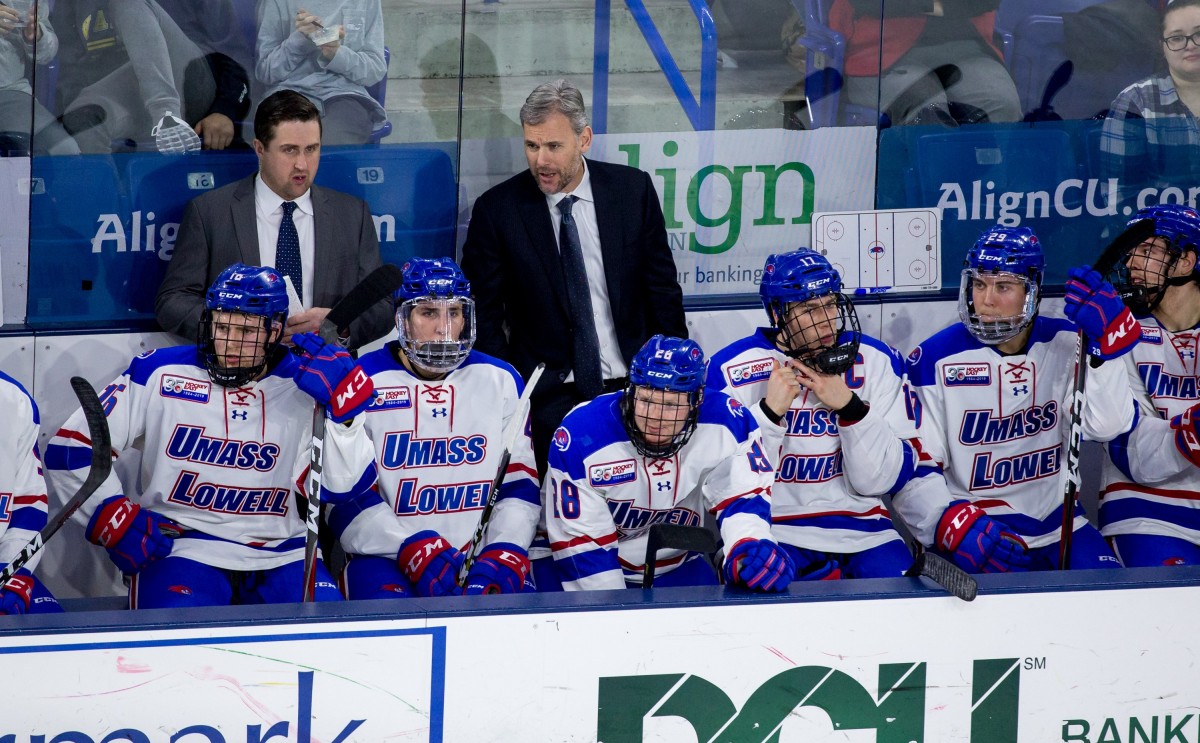 The River Hawks played from behind for more than 35 minutes in their 4-3 Friday night loss. (Photo Courtesy of UMass Lowell Athletics)

UMass Lowell men’s ice hockey struggled to put the pieces together Friday night at the Tsongas Center, falling 4-3 at the hands of the Colgate University Raiders.

Bested with a trickling, low-percentage shot from senior Raiders forward Ben Sharf just nine seconds into sudden death overtime, the River Hawk loss was not for lack of trying, however.

Playing from behind for well over 35 minutes on the first night of homecoming, No. 18 UMass Lowell battled back from the grips of defeat twice Friday.

But unable to find a cohesive effort, the young River Hawks collapsed under the pressure of a Raiders team that commanded the pace of the game.

“It was a tough hockey game for us,” UMass Lowell head coach Norm Bazin told UMass Lowell Athletics. “I thought I thought in the span of a week we forgot how hard it is in college hockey and we got a first class lesson in it.”

“We were chasing the game right from the onset,” Bazin added.

Seeking their first win of the season after defeats at the hands of Rochester Institute of Technology, Ferris State University and Boston College, the Raiders lacked energy in the opening five minutes of regulation play.

Berglund and Brown would connect again later in the night, with the latter scoring on a helper from the former this time around.

But the goal would come in the second, after a commanding fifteen minutes of play from the Raiders – who had still managed to carry the first period with goals from junior and senior forwards Jared Cockrell and Paul McAvoy.

Even Brown’s breakthrough in the second period of play would not secure the River Hawks solid ground from which to stage an assault.

Instead, junior Raiders defenseman Trevor Cosgrove would apply the breaks to any attempt by UMass Lowell to shift the momentum, putting the third puck past UMass Lowell’s untested freshman goaltender Logan Neaton.

The son of former Pittsburgh Penguins goaltender Patrick Neaton, Logan Neaton would stop an overwhelming 25 shots and come away with a strong .862 save percentage in his first collegiate tilt.

Bazin cited the homecoming defeat as a learning experience, indicating that he expects the the team to be facing several opportunities for improvement early on in the year.

The River Hawk head coach did, however, mention that first and foremost on the list of potential improvements is getting the “effort” squared away.

“There are so many things at this point in the year to improve, but effort is something we can control,” Bazin said. “We’ve got to come out with more fire than that.”

UMass Lowell will take the ice at the Tsongas Center again Saturday, Oct. 19, to finish out their two-game homecoming series with Colgate. Puck drop is 6 p.m.