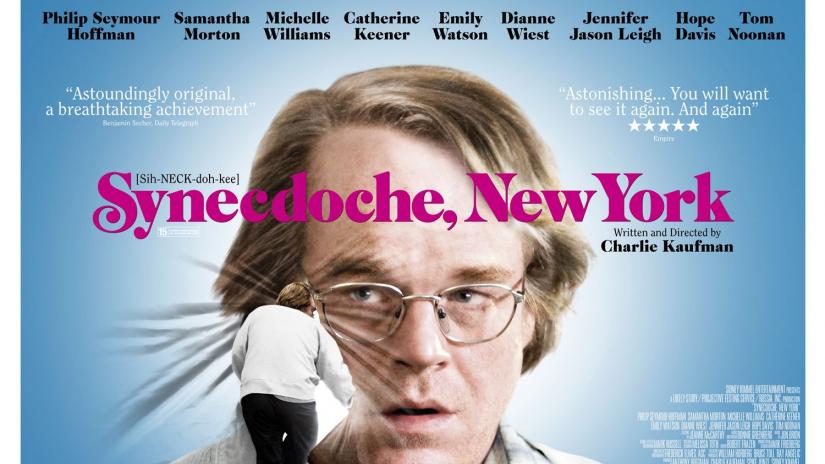 Phillip Seymour Hoffman died in February of the year 2014 from combined drug intoxication. He was only 46 years old. Whenever a star dies at a young age, it tends to serve as a reminder of just how mortal everyone is. It is fascinating, then, to note that six years before his death, Hoffman starred in one of the most striking pieces of cinema related to death ever made: Charlie Kaufman’s surreal masterpiece, “Synecdoche, New York.”

The term “synecdoche” is defined as “a figure of speech by which a less encompassing term is put for a more encompassing term or vice versa.” In other words, a synecdoche is a part representing a whole. For example, spectacles are referred to commonly as “glasses,” but the glasses themselves are merely a part of the whole.

In “Synecdoche, New York,” the film’s protagonist, Caden Cotard, attempts to direct a play representing New York City and modern life itself. The play, per “Synecdoche’s” trademark surrealism, is acted not in a theater, but in a massive warehouse. Here, entire buildings are constructed. Inside these buildings are actors playing normal people, each one of them “hurtling towards death, yet here… for the moment” as Caden explains. The goal of Caden’s piece, expressed through a brilliantly delivered monologue by Hoffman, is to help the audience realize that they will die. In the film, Caden’s play never opens, but Kaufman’s film effectively conveys their shared, memento mori-esque message.

Charlie Kaufman is known for his uniquely confusing writing style. Previous to “Synecdoche,” he wrote Spike Jonze’s “Adaptation” and Michel Gondry’s “Eternal Sunshine of the Spotless Mind.” “Synecdoche,” however, is Kaufman at his most bizarre. Uncoincidentally, it is also his first time sitting in the director’s chair. The strange style of “Synecdoche” is far from pointless, however. Each surreal moment is symbolic and/or metaphorical. At one point in the film, a character named Hazel purchases an actively burning house. In another scene, Caden Cotard cannot tell if a year has just passed, or if it was simply a week. His girlfriend replies, “we need to get you a calendar.” The list goes on.

Of course, these moments are representative of modern, real-life concepts. The constant peril of Hazel’s burning house is meant to invoke the idea that the home one lives in at any given point in their life, could indeed be the home they die in. Caden’s inability to distinguish a week and a year seems silly at first, but upon further examination, rings deeply true of human’s perception of time. When one spends an entire year going to the same workplace, seeing the same people, practicing the same daily routine — all with only sporadic exceptions — then it is no surprise that the human mind seemingly clumps each repetition together, to the point that one mere week could indeed represent, or in Caden’s case, be mistaken for one whole year.

The genius and often disorienting effect of representation through the use of surreal metaphors and symbolism is likely why “Synecdoche, New York” is so criminally underrated. Many modern audiences seek out film as a means to escape the truths of life, not to confront them. Luckily, though, there are still artists in the film business who refuse to cater singularly to this majority. Charlie Kaufman is unapologetically one of them. “Synecdoche” is a film that will pull one’s eyelids wide open, then will proceed to roll them back into one’s skull so they can see just how mortal they really are. As Caden says in his speech to the starry-eyed creative team about to begin work on his project, “I will be dying and so will you, and so will everyone here… Each of us [knows] we’re going to die, [and] each of us secretly [believes] we won’t.”

Hoffman’s death goes to show how the harsh reality of Caden’s words is made harsher, and more real, by the fact that death is no fiction. The point of “Synecdoche’s” story is not to depress the viewer, but to help them realize their time is finite, hopefully so they will recognize the memento mori truth of existence, and, in turn, act on the carpe diem.