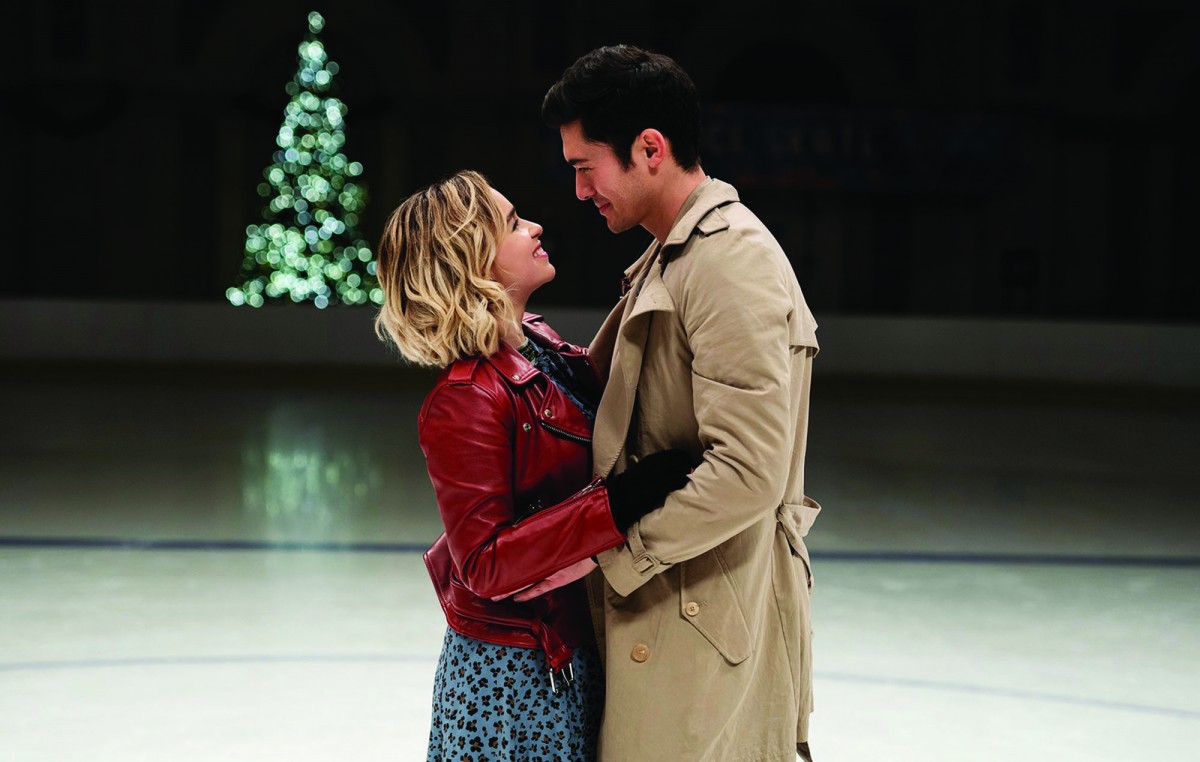 “Last Christmas” is based on the song of the same name by Wham! (Photo courtesy of Universal Pictures)

From director Paul Feig and writer Emma Thompson, “Last Christmas” puts a new spin on the typical holiday rom-com. While “Last Christmas” does follow some of these formulaic and obvious plot points in the genre, it manages to make itself much more enjoyable than the average, and extremely cheesy, collection of its contemporaries by flipping the genre on its head. Despite the flaws that it has, the film includes a talented and star-studded cast, a picturesque setting in the dreamy Christmas-time London and a ridiculously nostalgic soundtrack that does not leave much to be “bah humbug” about.

Based on the songs of the late George Michael, the film introduces the audience to its protagonist, Kate, played by “Game of Thrones” actress Emilia Clarke, who is quickly shown to be an aspiring singer and a massive George Michael fan. Kate is a cynical, couch-hopping, Christmas-shop employee who just cannot seem to get her life together. The Christmas before the movie takes place, Kate is said to have been in a near death experience which caused a downward spiral into her heavy drinking, couch-hopping, one-night stand type of lifestyle.

If played by the wrong actress, Kate could have easily been perceived as whiny, negative and downright unlikable. However, with witty, sarcastic lines, Clarke can portray Kate exactly the way a hot-mess protagonist should be. She strikes just the right balance of pessimism, vulnerability and charm which makes her an adorable and lovable character to root for.

In her everyday drag as a year-round Christmas store employee, Kate meets Tom, played by “Crazy Rich Asians” breakout star, Henry Golding. His portrayal here and in “Crazy Rich Asians” proves that playing a love interest in a romantic comedy is exactly his element.

Golding’s character in “Last Christmas” is everything one might expect from the love interest of a romantic Christmas flick. He is incredibly sincere, charming and has an unusual zest for life that forces the self-destructive Kate to see the bright side of life.

In some ways, Tom is too perfect and seems almost like a parody of Christmas movie love interests. He has almost no flaws other than the fact that Kate can never get a hold of him unless they run into each other. Always, and only, finding Kate in the lowest points of her story arch, Tom has an air of mystery to him which is the center of the film’s big plot twist.

While the film struggles to keep the element of surprise through obvious foreshadowing, the twist happens in a way that one might not have expected. The plot twist causes the film to veer into a darker, less lustrous tone for a Christmas movie much to the film’s advantage. This works because it forgoes the jolly, candy-cane lens of other Christmas movies. Rather, the film creates a story with something a little more meaningful.

One of the most notable aspects of “Last Christmas” is its cast of colorful and hilarious personalities with Golding’s “Crazy Rich Asians” co-star, Michelle Yeoh playing Kate’s boss who goes by the name of Santa and Emma Thompson, playing Kate’s overbearing Yugoslavic mother named Petra. The one-liners given by Thompson and the snarky remarks made by Yeoh are what gives the film its place under a comedy.

The music of George Michael and Wham! Is also incorporated well without becoming a full-on musical production. The film allows fans of George Michael to revel in the nostalgia of his music as it rings in the background of many scenes while still allowing other movie goers who may not be familiar with his music to enjoy the movie as its own entity.

Regardless of the film’s triumphs, there were quite a few things that could have been done differently to improve the movie. A lot of weak points of the film has to do with the inclusion of unnecessary sub-plots such as giving Yeoh’s character a love interest that does nothing for the bigger story. It feels a bit out of place and the one thing that it does is it is awkward enough to be only moderately funny. This part of the film did not make an impact on the story as a whole and would not have made a difference had they chosen not to include it.

“Last Christmas” could have also benefited from creating a more natural progression in the love story between Kate and Tom. Though Clarke and Golding put on an electric performance as Kate and Tom, it just seems as though their story was rushed from the beginning.

The film forces the two to develop a bond that they are just not ready to have at that specific moment. With a little bit more careful planning and thought, they could have given Kate and Tom the deeper love story they were meant to have.

Overall, for its genre, “Last Christmas” creates a movie ten times better than the annually released generic Christmas film. Even with some of its clichés, such as Kate’s dysfunctional and quirky family, Tom as the charming love interest and cast of comedic relief characters, the film is quite enjoyable. In the midst of Christmas rom-coms that are all about candy-canes and mistletoe, “Last Christmas” finds a way to stand out with a story plot that has a little bit more heart, a little more soul and a lot more George Michael.