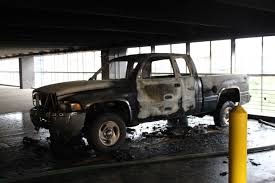 According to the Lowell Sun, the truck that started the fire was a student’s 2001 Ram 1500. No other cars were on fire. (Courtesy of the Lowell Sun)

A student’s truck caught fire on the second floor of the North Parking Garage, located behind Costello Athletic Center and next to the Cushing Field Complex, last Thursday.

The UCAPS Twitter posted that the first and second floors are expected to be reopened by 1 p.m. on Monday, Nov. 18.  According to Christine Gillette, the director of Media Relations reopening has been moved to approximately 1:30 p.m., barring any unforeseen development. There may be a few spots blocked off on various levels (mostly faculty and staff spots) for another day or so.

Cleanup efforts continue at north garage and remains closed for students. We anticipate the student section to be reopened by 1 p.m. on Monday, Nov. 18.

Alternative student parking is Riverside Lots A and B, the Broadway Lot on south campus, and 1001 Pawtucket Blvd.

University dispatch received a call about the vehicle around 7:41 a.m., said Rick Wood, the director of life safety and emergency management. Students were asked to avoid the area, and the North Campus bus stop was moved to University Avenue in front of Cumnock hall.

“We work very well with the city in emergencies,” said Wood on working with the city to move the bus stop to University Avenue. According to Wood, the stop was there for only 25 to 30 minutes as emergency services worked on the fire

“It is important when there is a fire that students leave the building quickly and know that there are fire alarms in the building,” said Wood. He said that the car would have been putting off lots of heat and that cars contain around 300 pounds of plastic.

The fire is believed to have been mechanical in origin.

“It is our understanding that it was something within the vehicle verses in the surrounding environment,” said Gillette.

The first and second floors have been closed for cleaning since the fire. The third through fifth floors have been open to faculty and staff. Wood said they had chosen to close both floors because as they pressured washed the area, runoff would flow to the second floor. Because of the garage’s open design, they were able to keep the three upper levels open.

The north campus garage will be reopened for faculty/staff at 3 p.m. It will remain closed to students while cleanup continues.