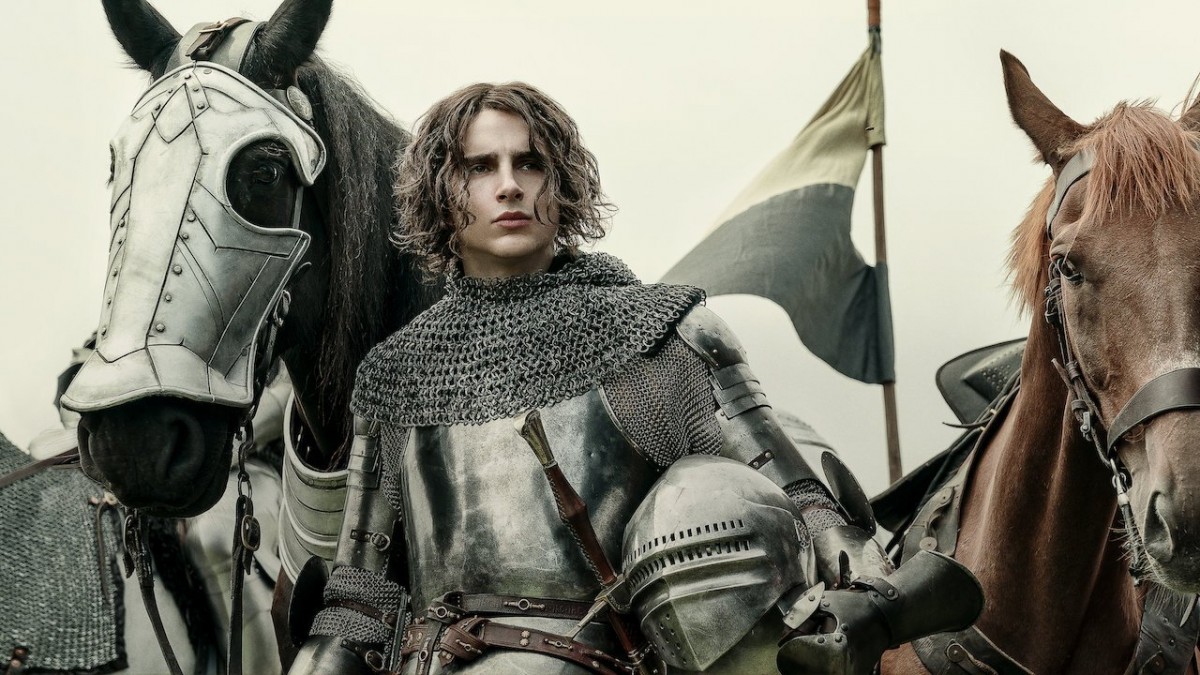 “The King” had a brief, limited theatrical release before coming to Netflix. (Photo courtesy of Netflix)

From director David Michod comes a Shakespearean retelling of Henry V in early 15th century England. Netflix has with another wonderfully adapted movie starring Timothee Chalamet as the young King Henry V and Robert Pattinson as Prince Charles of France.

This movie opens with Chalamet walking amongst dead bodies in the aftermath of a war and taunting a man crawling towards something. After stating that Scotland is the opposite direction, Chalamet immediately kills the man with his sword. If the opening scene is not engaging enough as it is gruesome, the whole movie leaves the audience at the edge of their seat with every moment proceeding.

This movie is layered in vivid medieval structure and the portrayal of English culture within the time period was spot on. As the audience is taken through King Henry V or Hal’s story in the beginning, they witness a lazy and rebellious character who wants no involvement in the kingdom or his father King Henry IV. That is until Henry IV tells his son that his younger brother will take the place of the throne instead of Hal to which Hal believes is his brother’s suicide. Down the line, Hal becomes king by unforeseen circumstances and leads a reign that many have feared.

The cinematography includes raw, unique and beautiful moments where the audience can feel the emptiness that Chalamet’s character shows or the solitude that Hal lives in during his reign. A few examples include sunsets amidst war or knights that are lined up in their armor. There are also many scenes where grotesque and bloody moments occur that can make some viewers feel uneasy, but they are captured in such quick and minimalistic ways that if one blinks, they will miss it. Also, from the perspective of a Shakespearean retelling, this seemed to show more of a darker and haunting side of the original play versus the comedic ends that Shakespeare’s plays usually take on.

Some critiques of the movie are that women had a minor role within this movie, but it made sense due to the time period of this movie. The few women who were shown towards the beginning did not have much of a status and were of a lower class. There only use being that of a servant to the men’s needs. Although, later in the movie the audience can see hints of that feminine power that movies and television shows have recently included. Another critique is from Pattinson’s character and how it felt too comedic for the seriousness of the film itself. There are times of a comedic relief of sorts, but Pattinson’s character almost deviates from the actual story itself. The inclusion of his character felt more of a ploy to draw in more of an audience because of Pattinson’s previous acting career for “Twilight.”

Other than that, the writing of this movie is sophisticated and engaging. It effortlessly forces the audience to pay attention to every word and transports them into the story itself. Even the ending will have the audience holding their breath and nearly begging for more of King Henry V. Chalamet is a movie screen icon and his acting is so deep that one can almost believe that he could have been a king in real life. His acting commands attention and he makes the movie a medieval gem. One cannot stress enough how enchanting this movie is and Netflix has always been prone to make successful films that are accessible to many people around the world. Regardless if the viewer is a history enthusiast or a Shakespearean fan, this movie is one that everyone can enjoy and can watch over and over again.