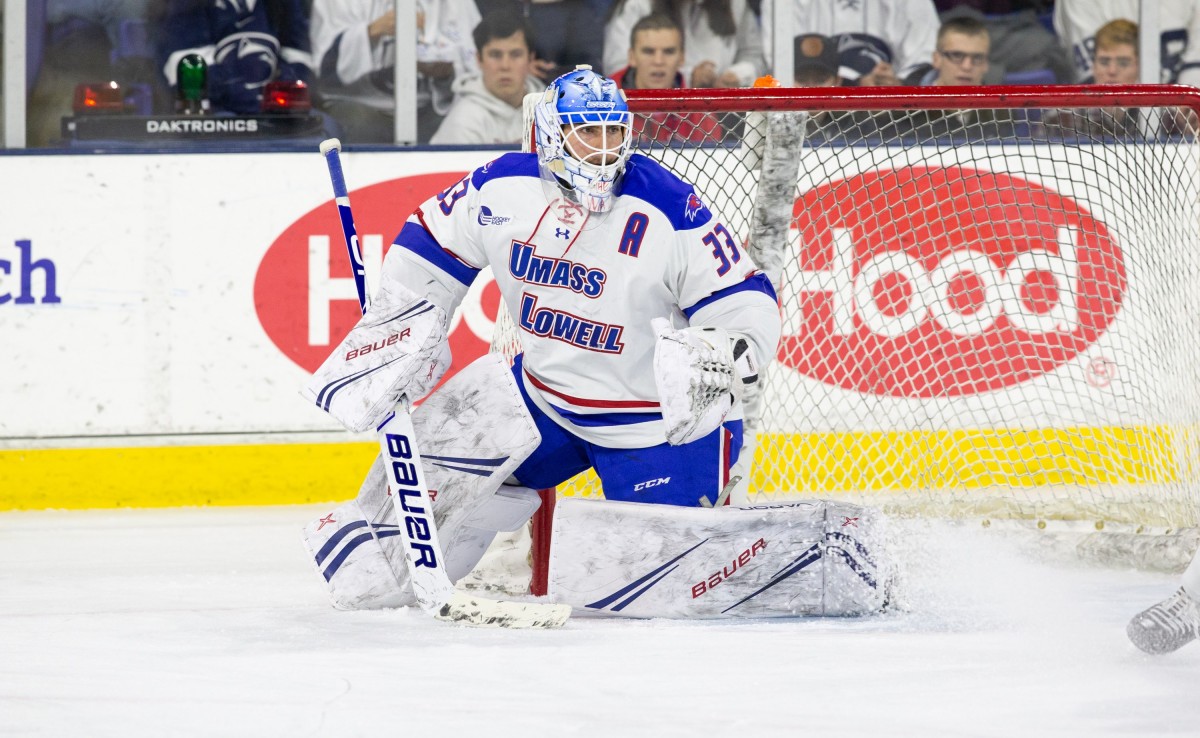 The River Hawks managed to best the Friars in their three-game season series despite Saturday’s loss. (Photo courtesy of UMass Lowell Athletics)

A first period power play goal netted six seconds after the faceoff from Friar’s forward Tyce Thompson kickstarted a rout and the River Hawks could not generate much offense after that.

The first 10 minutes of the game went right in every single way for the Friars, who were ready to go after blowing a 2-0 lead Friday and losing against the River Hawks in Providence. From puck possession to scoring chances, the Friars dominated the game Saturday, and the River Hawks seemed unable to stop themselves from turning the puck over.

“Despite the result, I thought we had a good first period,” said River Hawks head coach Norm Bazin. “I thought we had a few chances early, but [Providence] did a good job being a little more desperate. I really didn’t mind our effort. The execution was there.

The Friars later doubled their lead halfway though the first period as defenseman Cam McDonald snuck a wrist shot through River Hawk goaltender Tyler Wall’s five-hole. The screen set in front of Wall ensured Wall would not see the puck through the crowd.

“We played well,” said Friars head coach Nate Leaman. “A solid effort all the way around from all of us… Credit to [the River Hawks], they are a great team and are a physical team. We just had a better response after last night’s loss.”

Friars forward Jack Dugan appeared to extend the lead to 3–0 just 50 seconds after the second goal, but his goal was reviewed and eventually waved off due to a high stick.

The Friars did get that third goal however, though it would not be until the third period. Friars forward Patrick Moynihan took a beautiful tape to tape pass from goaltender Michael Lackey and rifled a shot by Wall before he could even get his glove in position to make a save.

“I’ll have to go back and look at the film,” said Bazin. “I can’t really say what was a penalty and what wasn’t, but our penalty kill unit and power play unit has to be better. It wasn’t bad tonight, but there’s room for improvement.”

The River Hawks made it a little interesting with an even strength goal by forward Connor Sodergren with 12 minutes left in the third period, but the momentum from the goal would not carry over for the remainder of the game. The Friars held the puck and peppered Wall with shots, not letting the River Hawks have many chances to close the gap.

An empty netter from Friars forward Greg Printz iced the game at 4–1. Wall stopped 32 of the 35 shots he faced, and Lackey stopped 27 shots.

“I saw the puck well,” Lackey said. “They did get close, hit a few posts, but overall, I’m just happy with how I played and getting out with a win.”

The River Hawks return to action four weeks from Saturday, as they visit Merrimack College on Jan. 4 at the Lawler Arena in North Andover, Mass. Puck drops at 7 p.m. and will be televised on CBS All-Access.