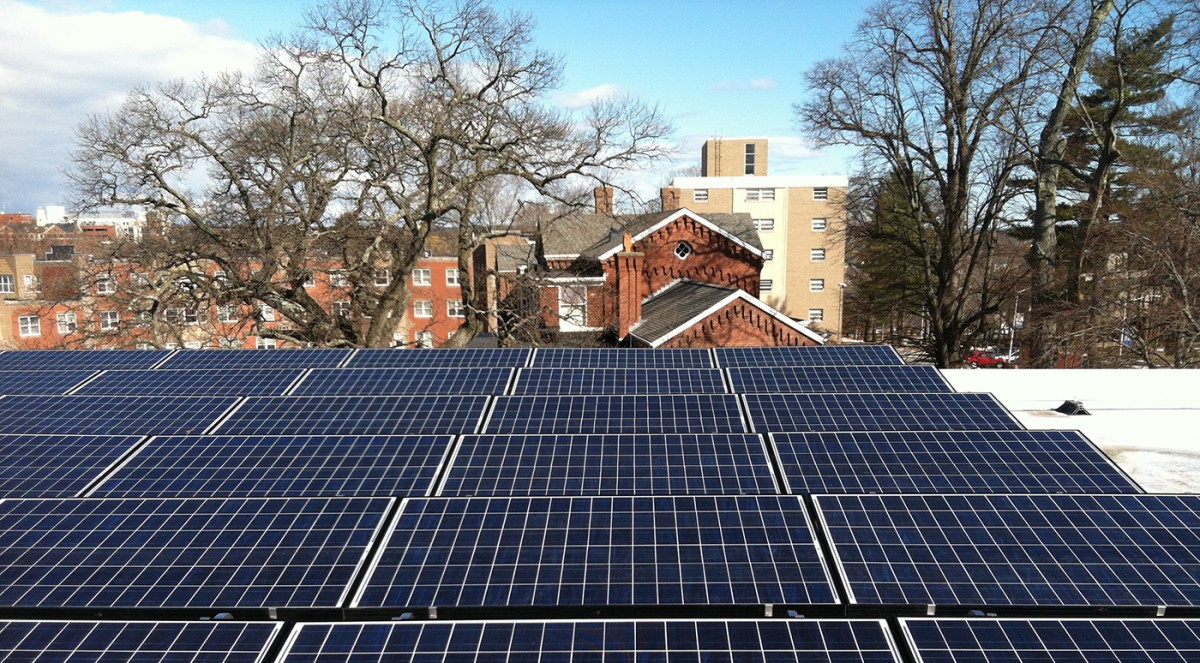 (Courtesy of UMass Lowell) The university has four solar arrays, located on the roofs of Costello Gym, Bourgeois Hall, Leitch Hall and Dugan Hall, consist of 1,172 panels that combined can produce 246 kW of power.

The world is changing. For better or for worse, today’s world is in a constant state of change. It ranges from the time of day, to the ever-growing concern about climate change to what one’s next meal might be. Some of these changes may feel outside the scope of what one person could reasonably change. However, one can hope to shorten the gap of individual potential with the help of the Green Community Partnership.

The Green Community Partnership is an alliance between UMass Lowell and the City of Lowell and serves to help and support sustainability programs throughout Lowell.

One aspect of the partnership includes a sustainability grant program, offering a total of $50,000 in grant money funded in part by philanthropist Nancy Donoghue. Last week on Wednesday, Feb.12, the partnership hosted a grant proposal open house at UCrossing for further instructions on the application process.

“Anytime we can work with the city is a good thing,” said Ruairi O’Mahony, director of sustainability. UMass Lowell has kept a strong interest in the development of new sustainability measures, keeping its first ranked position among all other Massachusetts colleges and universities according to the Association for the Advancement of Sustainability in Higher Education. The City of Lowell has also kept its rank ever since the adoption of the Sustainable Lowell 2025 Plan in 2013.

Seven years later, Lowell’s efforts are still fruitful. According to a recent survey, municipal greenhouse gases have decreased by just over 30 percent. In addition, UMass Lowell developed a partnership with Mill City Grows since 2016, supporting urban agriculture for sustainable and fresh local produce.

Such success brought an optimistic attitude that carried over to the day of the open house. The open house was held in a conference room in UCrossing. There, potential applicants were given a fuller understanding of whose ideas would be considered. Any proposals would have to align with the goals of the Sustainable Lowell 2025 Plan, as well as UMass Lowell’s own 2020 Strategic Plan. In addition, it was said that any proposals that lack innovativeness will be disregarded – the partnership will not use its grants to fund a dozen more recycling bins. That said, the partnership is more than eager for any new solutions it can pursue.

Any and all grant proposals must be made by March 6, whereupon a committee of university and city officials will review them all. All approved grants will be announced on Earth Day, April 22. These efforts, given time, will continue to push UMass Lowell and the City of Lowell past their potential for sustainability.