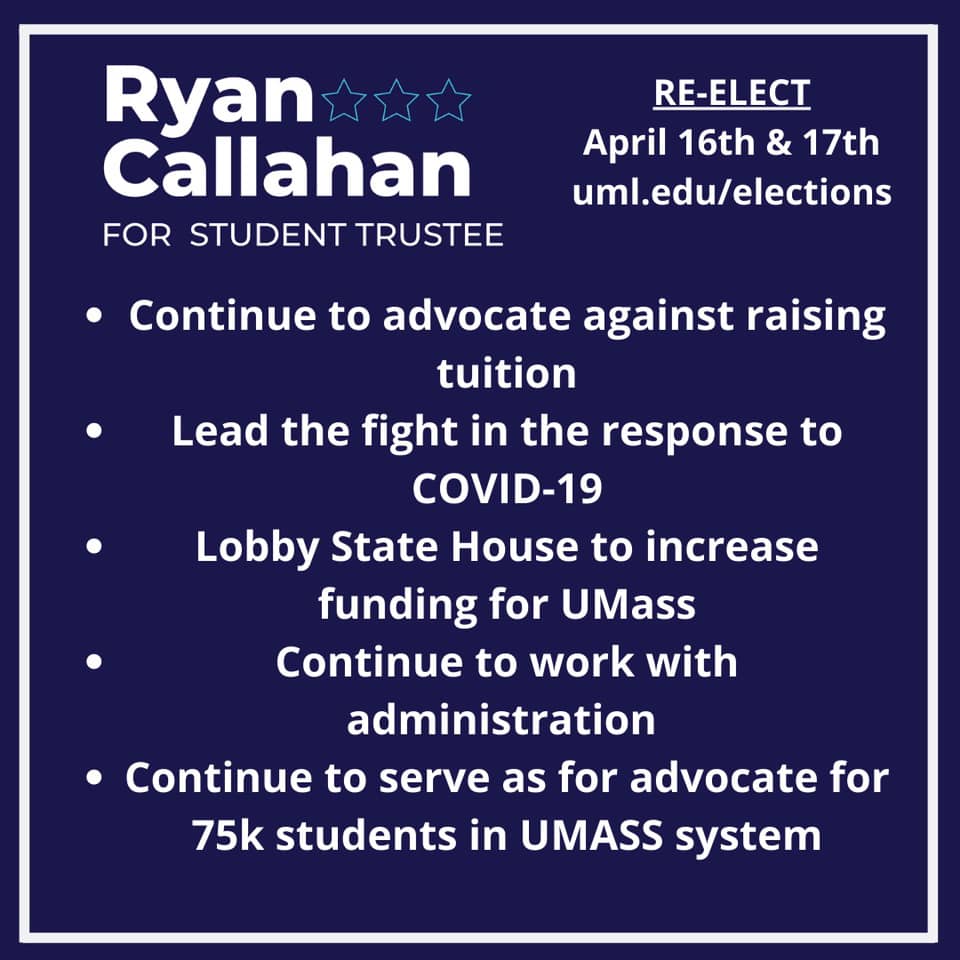 (Photo courtesy of Ryan Callahan) Callahan outlined his policies in his poster announcing his candidacy.

Student Trustee Ryan Callahan says if students choose to re-elect him this Thursday and Friday, he will continue his work to advocate against rising tuitions and advocate for sexual violence prevention and education on all UMass campuses.

The online polls will open at 9 a.m. on Thursday, April 16 and close at 4 p.m. on Friday, April 17. Students will be voting on the SGA president and vice president, as well as voting for a student trustee who will act as the voice for UMass Lowell Students at the board of trustee meetings.

Callahan served as the student trustee for the 2019 and 2020 academic year. He says that since taking office, he has advocated against increasing tuition, has established connections with the administration at UMass Lowell and has formally raised issues of sexual violence on campus and the need to expand access to disability services to the board of trustees.

In this next year, Callahan hopes to continue his efforts to help build the response to COVID-19, to advocate against rising tuition and lobby the statehouse to increase funding for the UMass System.

“With UMass having to provide adjustments to a lot of students across the system, it is a huge source of revenue that is lost,” said Callahan. “One of the things that immediately comes to mind when school systems need more revenue is raising tuition to make up for the losses.”

Callahan says that in his opinion, raising tuition would have more of a negative impact on the UMass community on the whole because, considering how many students are out of work and are already struggling to pay the current rates, it would inhibit students’ abilities to pursue a degree.

“[The] very first meeting I went to last summer, I made it clear to the board that students could not continue to sustain a tuition increase year, after year, after year,” said Callahan. “There were several other trustees, who weren’t students, who made this point. It is not something that the board does lightly, by any means. They are well aware of the effect that it has on students.”

Callahan spoke at the sexual assault survivors’ vigil hosted by UMass Lowell’s new Sexual Harassment Task Force. He also spoke to incoming freshman at Convocation during the Walk a Mile in Her Shoes event and brought up issues of sexual violence, as well as discussed how to combat against it.

Callahan says he felt it was not necessary to promote environmental sustainability in Lowell, crediting the work done by the chancellor and other administrators who have helped make UMass Lowell, according to the Sierra Club, one of the greenest universities in North America.

Callahan says he believes he has helped UMass Lowell connect to the city and that his goal is to advocate for all five of the UMass campuses to become sustainable.

“There is always room for improvement. I plan on improving,” said Callahan. “Now my feet are more than planted and I am hitting the ground running, so I am really looking forward to what we can accomplish this year.”