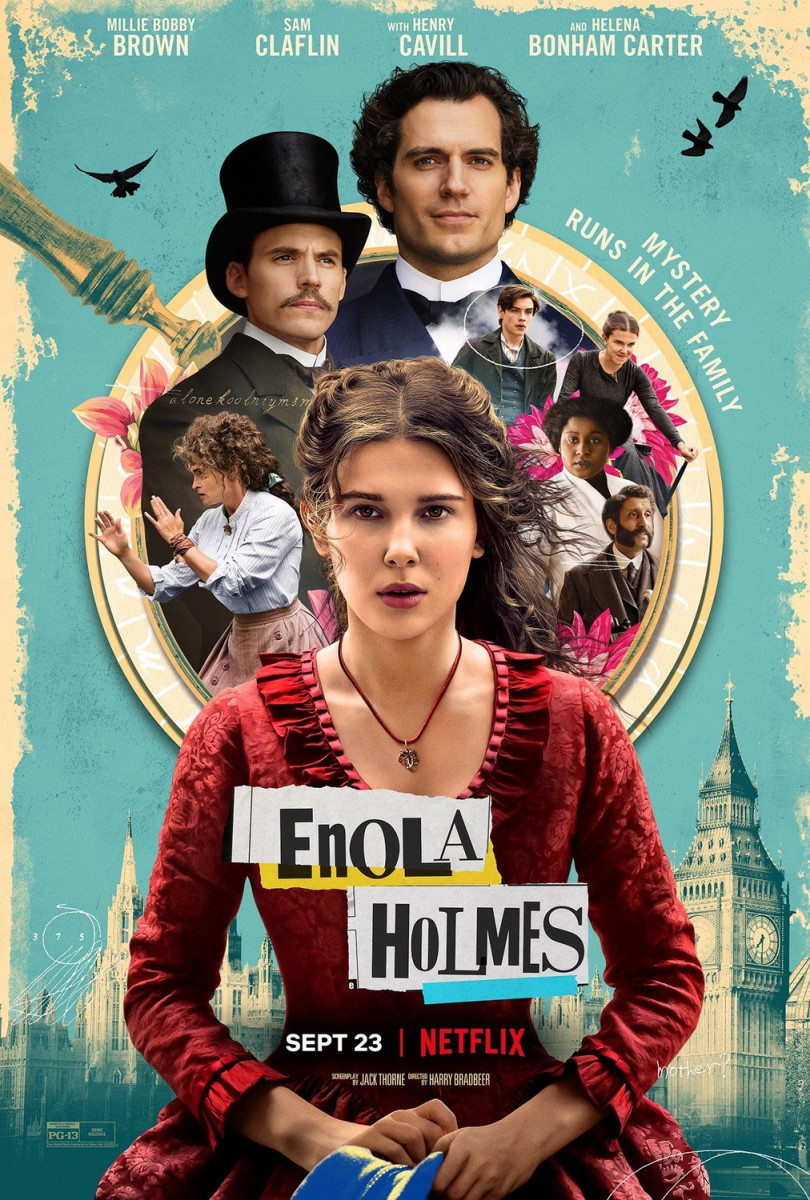 The tale of Sherlock Holmes has endured never-ending popularity in recent years. The story has been retold through books, television shows and films. Netflix’s newest film in the franchise, “Enola Holmes,” is based on a book series by Nancy Springer. It takes a new approach on Conan Doyle’s creation by focusing on the fictitious titular younger sister of the Great Detective. Though set in the Holmes universe and canon setting in time and place, “Enola Holmes” is very much Springer’s creation, brought to life on the big screen by Millie Bobby Brown and supporting cast members Henry Cavill and Sam Claflin as her older brothers, Sherlock Holmes and Mycroft Holmes, respectively.

For those who are familiar with Brown’s previous role as Eleven from the Netflix show, “Stranger Things,” this new role as Enola Holmes comes as a pleasant surprise. Though not her first film, having made her big screen debut in the 2019 “Godzilla” movie, this shows how talented Brown is regardless of the size of the screen she has worked with. The titular character of Enola is charming with a strong sense of right and wrong, in spite of the sensibilities of the London society she lives in. She does not hesitate to jump into the thick of the action and mystery.

Eudoria Holmes (played by actress Helena Bonham Carter) is Enola’s mother who vanishes a few years before the film takes place. This sets the stage for the rest of the film. Without her mother, who is painted as Enola’s entire world, she is forced to act on her own. Underneath the main plot of the Holmes’ mother’s disappearance is one of unrest, as a bill to allow women to vote is pushed to the House.

A precocious Enola, who from the start informs the audience that her name backwards spells alone, addresses the fourth wall along with a series of flashbacks to illustrate her unusual, but content upbringing. Employed as a plot device to inform or act in contrast to Enola’s actions and deductions, Eudoria’s words are spoken through flashbacks of their time together, and her words are used to advise and guide Enola through her investigation.

Enola continues speaking to the audience, sharing observations and her thought processes. This is reminiscent of recent trends of “Sherlock Holmes” as a visual medium where the audience is given a peek into Holmes’ mind. In contrast, Enola works out her deductions as she goes along, unlike Sherlock, who only reveals it all at the end. The only exception is in one spectacularly dramatic moment in the end of the film where Enola lays out the culprit of attempted murder to her companion and the audience.

Even amongst her own family, there is more happening below the surface than Enola knows. Meeting a medley of characters, some with ties to her mother, Enola’s sheltered upbringing is shown to be both a strength and a hindrance at times. Unlike many period pieces, the movie also does not shy away from a non-white cast.

Enola flirts with death, plays word games, and unravels a mysterious plot in her search for her mother, all while cheekily engaging the audience in her escapades. She uses her wit and strengths to face and overcome challenges placed by circumstances involving her family.

If one does not mind semi-frequent fourth wall breaks and the meticulous thought process of a witty Holmes — which someone a fan of Sherlock Holmes would likely be used to anyways — this is an engaging and entertaining film. The fourth wall breaks and flashbacks with Eudoria add levity without detracting from the gravity of the film’s darker moments.

While dealing with the misogynistic attitudes of London as a major plot point, Millie Bobby Brown’s Enola is far from tiring. By the time the movie concludes, one finds themselves cheering Enola on and wishing that she just buys her own set of street clothes and trousers.