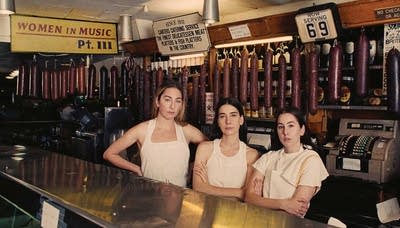 Being the all-female band’s third album, HAIM’s “Women in Music: Part III” is arguably their most experimental yet. With standout hits like “Gasoline” and “Don’t Wanna,” this extremely varied album has a little bit for fans of every genre.

The album starts out with the chill track “Los Angeles,” which lives and breathes a nostalgic tone about what home means to lead singer, Danielle Haim, and her two sisters. This is followed by the more upbeat and guitar-driven track “The Steps,” which feels like the perfect blend of modern pop with a guitar riff that reminisces on what made rock ‘n’ roll in the 1970s the great period for music that it was. The rest of the album goes on to pour out the Haim sisters’ thoughts and feelings. Rounding out home plate with “All That Ever Matters,” a relaxed, yet upbeat track with electronica vocal elements, and “FUBT,” another guitar-driven track that sends the album off on a more bittersweet note, being a song about breaking up with someone you still have feelings for.

“Women in Music Part III” also has a deluxe edition that adds an additional three songs onto the roster, starting with the relaxed track “Now I’m in It” and ending with the equally relaxed, saxophone-focused song “Summer Girl.” These three songs make getting the deluxe version of the album more than worth it. All of these gorgeous tracks were expertly polished by producers Rostam Batmanglij and Ariel Rechtshaid (known for their work with Vampire Weekend and The Plain White T’s, respectively), as well as Danielle Haim herself.

On paper, these song descriptions may seem like they do not belong together on a single album. However, this could not be any father from the truth. Although it is true that the album cannot be labeled to any singular genre, the album still feels collected, intentional and pleasing to the ears.

With all of this praise, however, there are a few negatives to the album as well. With an impactful start and a bittersweet ending, the album lacks in the middle, with a few forgettable tracks such as “3am” and “I’ve Been Down.” That is not to say that these songs are terrible, but they just do not stand out nearly as much as the more adventurous and experimental songs around them both in the beginning and end of the record.

Regardless, it is still the case that “Women in Music Part III” is one of those records that people will listen to on repeat, whether it be while taking some downtime for themselves, or while taking a car ride with some friends at sunset. In a time where females in rock ‘n’ roll are so important and new music is far and in between due to the pandemic, HAIM sets an incredibly high bar with this fantastic third entry in their discography. This album is a great soundtrack for the summertime. Summer is coming to a close, but at least this album will always bring one back to those beautiful summer days and the realities of life.