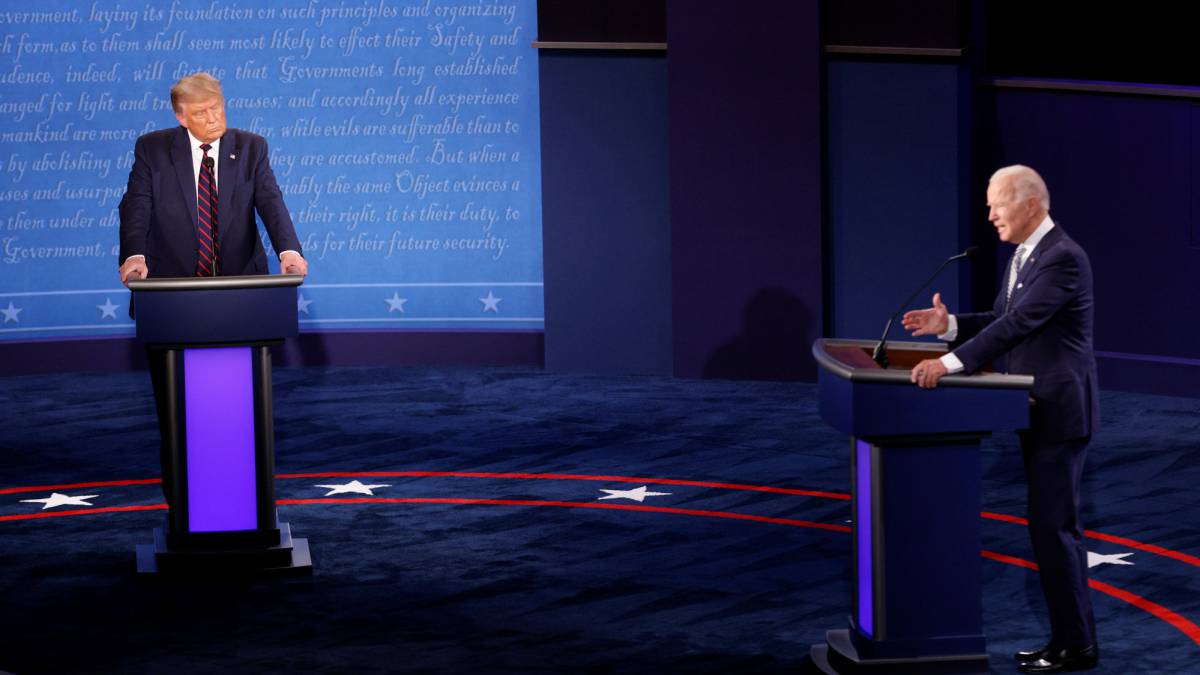 (Brian Snyder/Reuters) President Trump and Vice President Biden on stage at the first of the 2020 presidential debates on Sept. 29, 2020

When I saw the first presidential debate between President Donald Trump and Joe Biden, I was in disbelief. America is in an outrageous state. Wildfires, racial injustice and an unstable economy are some of the things that our presidential candidates must address.

Avoiding issues and speaking about topics that do not relate to our country’s recovery is unjust. One of the things Trump decided to focus on was Biden’s family history. He insulted Biden’s son, Hunter, who has endured hardships. Trump tossed aside his empathy to taint Biden’s reputation with some nasty remarks about his son. Trump said, “Hunter got thrown out of the military. He was thrown out, dishonorably discharged for cocaine use—he didn’t have a job until [Biden] became vice president, and once [Biden] became vice president, he made a fortune.”

There were a few attacks on Biden’s end too. He criticized Trump for golfing more than creating a plan that would lessen the effects of the COVID-19 pandemic. Biden also confronted Trump about his mass rallies and insufficient use of masks. There was additionally a brief discussion about Trump’s reluctance to share information about his taxes. The subject was brushed over with a vague response by Trump stating that he paid “millions of dollars.” Unsurprisingly, that was all we could get.

Throughout the debate Trump continued to bicker with and interrupt the moderator, Chris Wallace, which made the debate more painful to watch. At one point as he addressed Trump, Wallace said, “I think the country would be better served if we allowed both people to speak with fewer interruptions. I’m appealing to you, sir, to do that.” However, Wallace’s request of Trump did not help much. Biden tried his best to deal with the situation, but his frustration began to show quickly. He called Trump a clown, told him to shut up and avoided looking at him.

Biden made some great points and had reasonable views. For example, he talked about his plans to establish a loan program for small- and medium-sized businesses and assisting schools that are struggling economically. Furthermore, he discussed the environment and his proposal to combat climate change. Despite this, Biden had his own missteps. When he discussed distinct issues, he had trouble finishing his thoughts and putting words together. That did not help him since people are concerned about his age, which is another thing Trump poked at.

Trump’s comments during the debate showed how good he is at stating things that do not add to the conversation, and this was a huge issue. He complained about mail-in voting and did not see any fault with the way he has handled the pandemic. Not only that, but he also promoted that a vaccine would be available within weeks, a claim I have no faith in.

When it came to matters such as riots, Biden embraced peaceful protesting while Trump boasted about his “support” from law enforcement. Wallace mentioned white supremacy and hate groups, and then attempted to have Trump clarify his stance on them. Of course, Trump said nothing that would unite our society. He had a grand opportunity to speak out against the hatred and division in America but instead he gave no clear standpoint. Trump said, “Proud Boys, stand back and stand by. But I’ll tell you what: Somebody’s got to do something about antifa and the left.”

Throughout the debate, Biden proved how knowledgeable and serious he is. When the Affordable Care Act (ACA) was brought up, Trump spoke badly of it without giving much of an explanation. In contrast, Biden defended the ACA and pointed out how getting rid of it would take health insurance away from 20 million people and remove coverage from 100 million people with pre-existing conditions. Here was my personal favorite statement from Trump during the debate: “By the way, I brought back Big Ten football. It was me and I’m very happy to do it.” Trump could not help but mention something so irrelevant.

The debate was eye-opening in many ways. I witnessed how unfit Trump is to be our president. He bashes others and avoids his own controversies. His lack of cooperation showed just how disrespectful and inconsiderate he can be. A lot of traits that a president should not have, Trump displayed without any shame. It was different to watch him first-hand rather than reading short comments or videos about his remarks. I would like to see Trump address the issues in future debates while respecting the guidelines. Biden should try his best to avoid getting distracted by Trump and continue to state his intentions as a presidential candidate. Both men need some work, but Trump’s flaws undoubtedly outweigh Biden’s.