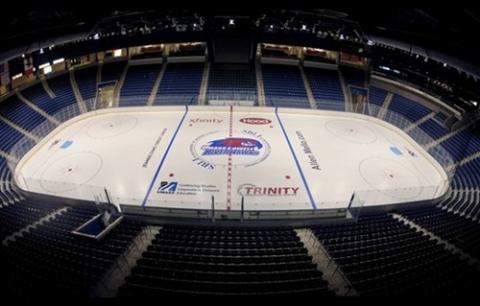 Photo courtesy of merrimackvalley.com. Inside Tsongas Center at UMass Lowell. This will be the scene for the River Hawks this season, aside from cardboard cutouts of fans that will fill the seats.

Hockey is back, sort of. The UMass Lowell River Hawks hockey team is set to return to action in an empty stadium until at least January 1, 2021. The university will reassess the ongoing COVID-19 pandemic to see if it will be possible for fans to enter the Tsongas Center.

“We are pleased with how much work has been put in to be able to play”, said head coach Norm Bazin, who will be entering his tenth season behind the UMass Lowell bench. “We’re very excited to get started.” Bazin said that if they had to play a professional team right now, “we would be ready.”

The captains for the season will be as follows: seniors Charlie Levesque and Connor Sodergren will be captains, while junior Lucas Condotta will be an assistant captain. Bazin also said that there will be a second assistant captain that will be determined monthly.

Some of the upperclassmen will look to have bounce back seasons. Junior Reid Stefanson is just one of a handful of players who will be looking for a better year. “The team, as a whole, will be looking to improve on last year,” said Bazin.

The team brings back four of the top six scorers from last season and their entire defensive core. With the loss of goaltender Tyler Wall, Bazin stated that sophomore Logan Neaton and freshman Henry Welsch would likely split time in net for the River Hawks. There are seven freshmen on this year’s team, which Bazin says is an average number. It will be interesting to see who of the freshmen will be on the ice on opening night.

As for the holes left behind by the graduated seniors, Bazin said, “We have a great core of guys in the room that gives us a great internal leadership not only from the captains but from everyone. Guys like Chase Blackmun, Jon McDonald, Austin O’Rourk and Dominick Procopio, to name a few.”

The River Hawks were voted fourth in the preseason coach’s poll, but Bazin is not worried about that. “We’re worried about the things we can control,” he said. “This season is going to be very different.” Because of COVID-19, UMass Lowell will only be playing games against teams in the Hockey East Association. The team will also be playing right through Thanksgiving and Christmas, which should give them a chance to build and maintain good chemistry.

Because of the schedule only being teams in the conference, the River Hawks will play a few teams more than normal. The Vermont Catamounts and UMass Amherst Minutemen will play against the River Hawks four times this season. UMass Lowell did a great job last year of playing hard right to the last whistle, beating UMass Amherst at home on what seemed like a mental error by the Amherst Goalie.

Last year, the River Hawks finished third in Hockey East behind UMass Amherst and Boston College. They will start their campaign at home November 27, 2020 at 6 p.m. against the North Eastern Huskies.