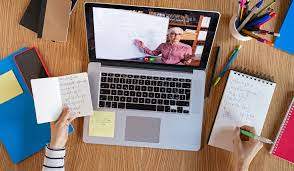 Every aspect of human life has changed as a result of the pandemic. For students, this change is seen in-part through a web camera and a computer screen. Although some universities have begun holding in-person classes, UMass Lowell is only conducting essential lab work to be done on campus. The rest of classes have moved to a remote learning setting, and many professors and students are struggling to adjust to the massive changes to their courses and environment.

“I’ve been doing this for 40 years. And I’ve never ever, ever taught online,” said political science professor Gregory DeLaurier, who says engaging students has been particularly difficult. “What I found really challenging was sort of changing my mindset, because I can’t stand up and write stuff on the board.”

Professors said that technology has created challenges for their students. “Some students are one of two, three or four students doing virtual education on their WiFi bandwidth. And it’s really expensive to upgrade your WiFi,” said professor of English Rebecca Richards.

The issues that arise with the constant use of technology has caused professors to tailor their curriculum in new ways. “I basically took what I would normally do in a semester, and I cut 30% out. Because I just assume it’s going to take longer for us to get through things,” Richards said.

Professors are working harder on a smaller curriculum than they are used to. “I find there’s a lot more prep to it,” DeLaurier said. “The materials (are) not different, but I’ve learned it has to be presented differently. I can’t stand up and walk around and write on the board. So, I spent a lot of time thinking of ways to make my point. Not just me talking, but with visual aid.”

Junior Alexander Willis said he felt that mostly everything about a classroom setting helped him stay on top of his schoolwork and being virtual has been a challenge. “I’m just the type of student where I benefit way more being in person. I don’t have the best attention span, and I feel myself being more distracted,” he said. “Not having the ability to be with your teacher in person, to ask questions, look at work, everything is just a little more complicated.”

Besides flattening the curve by staying at home, Richards has seen an underlying silver lining to remote learning. In speaking with her students, she said they have told her the only reason they can take classes is because they are virtual. Students who are working, parenting or caretaking family members are able to balance their life at home with their academics.

After over 40 years of teaching, DeLaurier is choosing to end his career as a professor after the fall semester ends. “I don’t want to overstate the case, because I think we’re doing okay, but it’s harder to engage students when they’re there, but you don’t always see them. I would imagine that every single professor feels the same way, unless they’re really, experienced in teaching online, which I’m not, and I’m never doing it again,” he said.