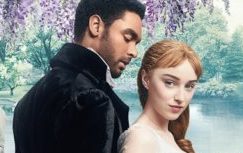 Within the past month, “Bridgerton” has topped the charts as one of Netflix’s most watched shows. The show is an adaptation of the adult romance book series by Julia Quinn and follows the Bridgerton family in the regency era of England. It is an absolutely stunning production from the underrated cast to the enchanting, themed balls and costumes. “Bridgerton” leaves viewers wishing  they were dancing the night away and discovering all of the juicy secrets of those around them.

The story is narrated anonymously by the town’s famous gossip writer, Lady Whistledown (voiced by Julie Andrews). All of her published pamphlets spread news of scandal, relationship theories and family dilemmas. The two main characters, Daphne Bridgerton (played by Phoebe Dynevor) and the Duke, Simon Basset (played by Regé-Jean Page) are polar opposites. Daphne is adamant on finding a perfect match, being swept away into a world of comfort and having children. Simon, on the other hand, is hot-headed and has no interest in marrying anyone or feeding into the tiring process of courting.

Unexpectedly, the two leads form a fake relationship in an attempt to gain Daphne more suitors and to relieve Simon of the pestering from the mothers of the ton, Britain’s high society. Overtime, their relationship grows numerously, but with all secrets somehow being exposed. It is hard to keep anything hidden, especially from Lady Whistledown.

Producer Chris Van Dusen created a fantastic period drama that leaves audiences, not only swooning over Simon Basset, but also connecting to the rest of the characters’ stories. Besides the Bridgertons, the other key family in show, the Featheringtons, have their own dilemmas that reveal just how meddlesome they become during the courting season. The use of Lady Whistledown’s narration really brings depth to the story and is a well-crafted strategy to summarize all of the show’s drama and secrets.

Those who are fans of slow-burn romances will find that “Bridgerton” is the perfect show to fulfill their needs. Dyenevor plays a beautiful and delicate-looking Daphne. She has a star quality in her acting which commands all attention from both, the show’s cast and viewers. Meanwhile, Page plays a charming Duke and does an excellent job portraying emotions through his expressions. The show’s romance between the two takes its time to develop, ensuring that nothing feels rushed or glossed over. The show expertly reveals all the trials and tribulations that come with loving another. The actors do such a beautiful job that the relationship feels believable. Not only is this relevant for Simon and Daphne, but it is also true for all other romances on the show, where relationships take time and can never truly be lighthearted and instant.

One of the issues with the show, besides its highly controversial episode which includes a rape scene, is that Daphne is a considerably obnoxious character. She is selfish and determined, in a negative way, and the series does not shy away from showing what she is willing to do to get her happy ending. “Bridgerton” also discusses levels of social classes and includes BIPOC in positions of power, a point for which the show should be applauded. Besides the slight win for BIPOC in the show, it still remains a predominantly white cast and that causes such a moment to lose some of its impact.

Overall, “Bridgerton” is a beautifully crafted story filled with heart, humor and mystery. The appeal it has on audiences right now is slightly surprising since it seems like a fairly niche show, but there is something for everyone. From the first episode to the last, so much is unraveled, making “Bridgerton” a true treasure of television.