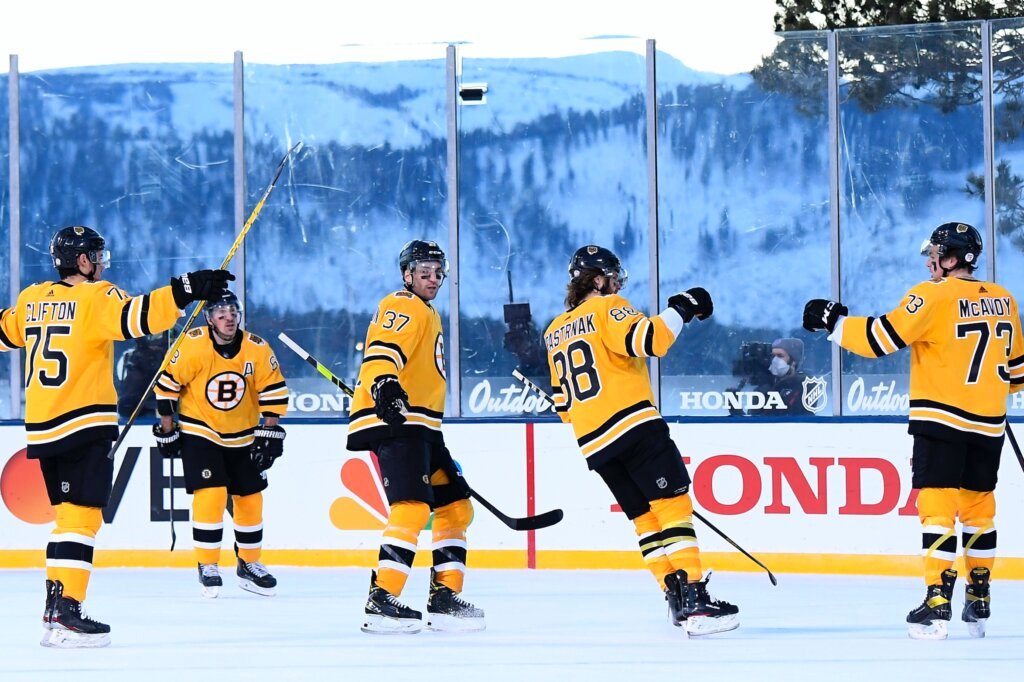 In a very unusual hockey season, the Boston Bruins sit in a tie for first place in the Mass Mutual East Division of the NHL. Adjusting to the COVID-19 pandemic, the NHL realigned all of its teams and divisions for the 2020-21 NHL season in addition to reducing the typical 82-game season down to 54 games.

The new divisions are structured based upon geographical proximity, including an all-Canada division to accommodate the pandemic travel restrictions among the U.S. and Canada. This year’s schedule limits teams to only play other teams in their division.

The Bruins were coming off an impressive 7-3 victory over the Philadelphia Flyers in this year’s version of the NHL’s Winter Classic, which happened to be the most watched regular season NHL game in NBCSN history. With a picturesque background and no fans, the Bruins squared off against the Flyers at Lake Tahoe. Right winger David Pastrnak led the Bruins with a hat trick and some nifty shooting, as he continues to prove that he is one of the most elite scorers in the league.

Coming into Sunday’s game, the Bruins dropped games against the New York Islanders, 4-2, and New Jersey Devils, 3-2. More recently on Feb. 25, they lost to the Islanders again 7-2, with New York scoring five unanswered goals in the third period.

Commenting on this game, Bruins head coach Bruce Cassidy said, “We didn’t execute very well. We got down on ourselves, tried to do too much there, a couple of pinches, shorthanded goal against, so there’s a third and fourth and fifth. We just didn’t stick with it.”

The blue line for the Bruins looks slightly different this year as they parted with free agent captain Zdeno Chara, who opted for a contract with the Washington Capitals, and lost power-play quarterback Torey Krug to a lucrative free agent deal with the St. Louis Blues. This has enabled the Bruins to give more playing time to unproven young defensemen like Jeremy Lauzon, Jakob Zboril and Conner Clifton.

Charlie McAvoy has also been able to take more of a leadership position as the team’s top blueliner. Recent injuries to the defensive corps also prompted calling to action former Finnish first-round pick Urho Vaakaninen, who has played well in his recent appearances.

Looking ahead, long-time Bruins forward Brad Marchand is one goal away from the 300th of his career. Marchand has been with the team since 2006. On top of that, Bruins goalie Tuukka Rask is two wins shy from his 300th career NHL victory.

Massachusetts governor Charlie Baker recently announced that Boston would be allowed to have fans at sporting events starting March 22. Although the TD Garden will only be able to seat at 12% capacity, this is a step in the right direction for a city that has felt the burden of the pandemic. This will be the first time Boston has seated fans since March 10 of last year.