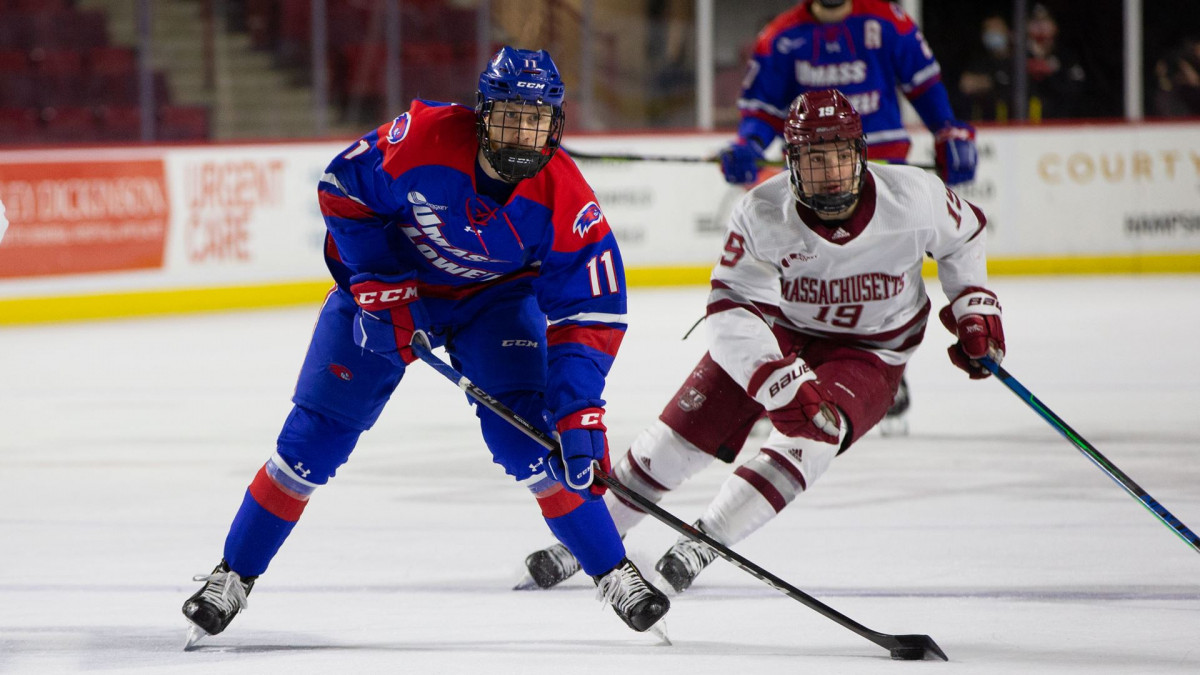 On March 20, the River Hawks lost to the UMass Amherst Minutemen in a tightly contested Hockey East Championship game. Lowell ended their season with a conference record of 7-8-1 and were ranked seventh in the division as opposed to the Minutemen, who were ranked third. The final score of the game was 1-0 with Amherst’s Jake Gaudet scoring the lone goal off of a rebound in the first period. This was the Minutemen’s second championship appearance and first championship victory. UMass Amherst will continue on to the Men’s Hockey NCAA Tournament.

Each Hockey East playoff game this postseason was played on campus locations due to the COVID-19 pandemic. The championship game is usually played at the TD Garden in Boston, but this year was played at the Mullins Center in Amherst, Massachusetts.

Every round of the playoffs was determined to be single-elimination as opposed to the best-of-three format from the quarterfinals onwards that was used in previous years. It was likewise decided that all eleven teams in the Hockey East division would qualify for the tournament. However, the ninth ranked Merrimack team was forced to sit out this postseason due to positive COVID-19 cases.

For Lowell, this appearance in the championship game came after a double overtime win against the first-ranked Boston College Eagles. This semifinal game ended at a score of 6-5 with Lowell’s sophomore forward, Matt Brown, scoring the sixth and final goal. This was also Brown’s sixth goal in six consecutive games.

The River Hawks were down 4-1 entering the third period and were able to mount a comeback with four goals matching the Eagles’ single goal in the final period. In the first overtime period, Boston had a goal called back due to an offsides penalty on the play. The rest of the first overtime was scoreless forcing a second overtime, where Brown scored his goal twelve minutes in. The game took a total of 92 minutes as opposed to the usual 60 minutes of regulation.

The first two rounds in the playoffs for the River Hawks were wins against Vermont and Boston University. The Vermont match-up ended with a 5-3 victory for Lowell, and the victory against Boston University was a 2-1 win.

In the championship game, Lowell’s freshman goalie Henry Welsch was able to make 21 saves while Amherst’s goalie Filip Lindberg made a shutout against the River Hawks with a total of 16 saves. River Hawk’s Andre Lee and Seth Barton each pulled six shots but were unable to ultimately score.

Commenting on the game, Lowell’s head coach Norm Bazin said, “We had some very good games against UVM and BU, and certainly had an epic comeback against BC. I thought tonight we needed a break. UMass is a very good team and they’ve had a good season.”

The River Hawks will look forward to their next season. Fans are hoping next season will be more typical after the rollout of COVID-19 vaccines and the eventual reopening of the country.