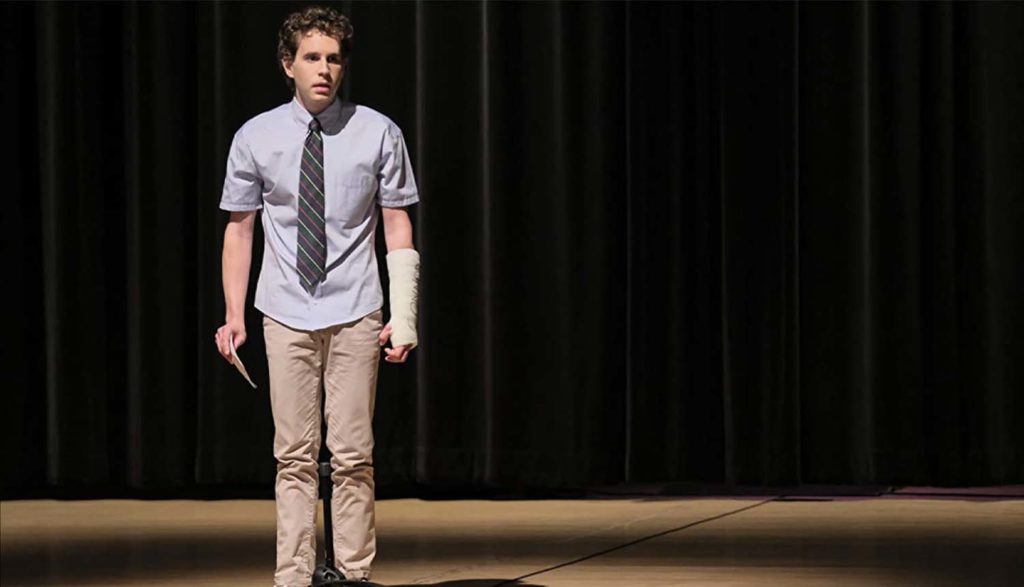 Directed by Stephen Chbosky, with screenplay by Steven Levenson and music by Benj Pasek and Justin Paul, the story follows high school senior, Evan Hansen (Ben Platt), who wishes to be noticed, but his severe anxiety prevents him from making connections. He is tasked by his therapist to write positive affirmations to himself in the form of letters; but after a stressful day at school, a depressing letter he writes is stolen by fellow outsider, Connor Murphy (Colton Ryan). It is later found with his body after committing suicide.

This leads the Murphy family to believe that the two  were friends, and they approach Evan about their son, which leads him in a web of lies about a fabricated version of Connor.

While the show in the past has been praised for its depiction of mental health, the movie’s portrayals can be controversial. On one hand, the movie does not romanticize mental illness; though at times, Evan’s decisions can be seen as deceitful and sometimes downright malevolent as he lies to a grieving family about who their son was.

It seems as though the film struggles at times on whether it wants the audience to sympathize with Evan or to see him as a villain. In the end, in a post-pandemic world that brought mental health to the forefront of many conversations, it is important that people ask themselves: What is the kind of representation that is wanted to be seen and does Evan fit that image?

Despite the story falling flat on some of its core subjects, the film can spark an interesting conversation about the exploitation of tragedies, especially on social media. Before his death, Connor was similar to Evan in that he was an outsider and struggled to make connections. But, now that he is gone, people start to take notice of him.

People were suddenly posting about how Connor will be missed and there is one disturbing moment in the film where bully characters take a selfie in front of his memorial. Even Evan is a perpetrator, as he profits off of Connor’s suicide for selfish gains, such as getting closer to Connor’s sister, Zoe (Kaitlyn Dever), who he has a crush on.

Upon the trailer’s release back in May, there was a heated conversation regarding the casting of the movie, specifically in regards to Platt, who was criticized for looking too old. Adults have been playing high school students for decades, though in this case, it proves to be a distraction, and at worst, ruins the film entirely.

Scenes that Platt shares with Dever feel creepy, and scenes with younger actors in hallways make him seem awkward, though not in the film’s intended way. Some may even believe that if they had casted a younger actor, it would’ve allowed for a more sympathetic portrayal of the character as it would seem more believable that he was just a kid making detrimental mistakes. Regardless, Platt still proves his talents to audiences and gives it his all for the role.

Other standout performances in the movie can be seen from the Murphy family, especially from Dever and Amy Adams. Adams’ performance as Cynthia Murphy truly makes one empathize with the pain of a grieving mother just wanting to have what she believes is left of her son.

Dever, on the other hand, brings another interesting depiction of grief as her character struggles to figure out who her brother actually was, whether it be this monster that was abusive towards her or Evan’s idealized version of him.

Both of these women give a raw and sympathetic performance to the point that Evan’s lies become even more frustrating as we see how they affect the pair. Amandla Stenberg also gives a great performance in her role of Alana, whose character has more development than her stage-counterpart, which is a pleasure to see.

Fans of the original play may appreciate this adaptation of the story, though it might be worth noting that there are changes. Other moviegoers may come out of the movie feeling conflicted or frustrated through the character’s actions and the depiction of some major themes.

The movie certainly feels confusing at times, though its well-meaning message of “you are not alone” are still words that ring true and that we should all hold dear to our hearts, even if the movie’s words fail at portraying that.