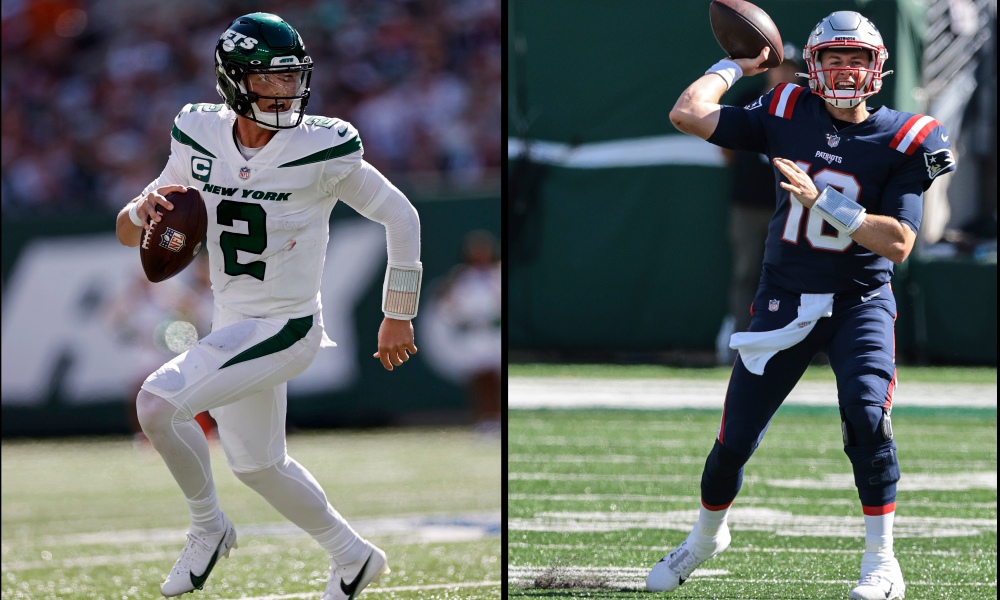 Rookie quarterback Zach Wilson of the New York Jets struggled to find any sort of footing in the 25-6 blowout led by Bill Belichick and the New England Patriots on Sunday. This win for the Patriots now improved coach Belichick to a career record of 21-6 against rookie quarterbacks.

It was a tough outing for Wilson as he finished the game 19/33 on passing attempts and only claimed 210 passing yards. More notably, the second overall pick out of BYU was at the mercy of New England’s pass defense as he threw four interceptions.

New England’s J.C Jackson led the pass defense with two interceptions. Jackson was followed by Devin McCourty, and Adrian Phillips who each claimed one. In just two games, the New England secondary is proving to be a threat, as they lead the league in interceptions.

Wilson was coming off of a decent performance against the Panthers last week; he found his way onto the stat sheet with 250 yards of offense, and two touchdown passes. Despite the loss, he would go on to finish that game with an 82.9 rating.

The Jets’ quarterback did have a rocky start in the first half but managed to turn it around in the second. There was a question as to what performance Jets’ fans would be getting at Metlife on Sunday vs the Pats, and Wilson answered.

Mac Jones’ performance in this game was reliable but lacked the offensive confidence a team needs to be a contender in the NFL. Jones threw for 186 yards, completed 22/30 pass attempts, and finished with an 89 rating. These numbers look clean, but a few flags get raised when the starting quarterback doesn’t throw any touchdown passes and is sub-200 yards for the day.

Jones addressed this in his postgame interview and acknowledged the lack of point production on his end, “Obviously you want to score touchdowns, you can’t be too conservative.”

He also added that on certain reads he felt uneasy about making decisions. That hesitation is what allowed him to leave Metlife with zero interceptions, but is also what kept him under 200 yards with no touchdown passes.

Jones relied heavily on point production from his teammates The New England running backs and special teams were the key components in the team’s success this past Sunday. Both Damien Harris and James White found the back of the endzone. Harris saw more of the action as he was given 16 carries and rushed for a total of 62 yards. New England’s kicker, Nick Folk, was lights out and laced four field goals through the uprights. Folk now has 33 consecutive field goals which is a Patriots’ franchise record.

The Pats now sit at an even record of 1-1 for the season and they will look to build on their successes from week two as they host the New Orleans Saints for their week three match-up. Quarterback Jameis Winston has shown both extremes of his game so far in just two weeks of play; in week one he had five touchdown passes against the Green Bay Packers while the following week he had a career-low rating of 27 against the Panthers.