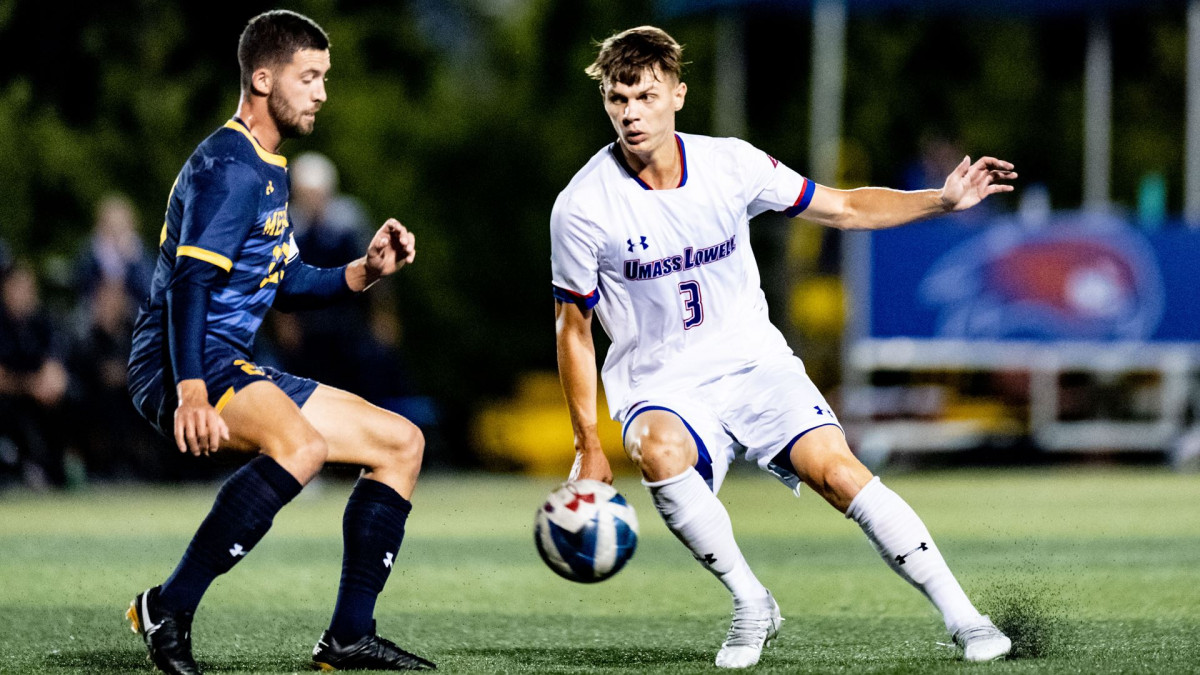 The UMass Lowell Men’s soccer team faced another tough loss against Merrimack this past Tuesday night at Cushing Field in Lowell losing 1-0 The River Hawks failed to find the back of the net and dropped to a record of 1-4-1 despite their strong performance.

Lowell was clearly the better team throughout the match with the River Hawks controlling the tempo and pace of the entire game, yet they were unable to capitalize on any of the scoring opportunities they created having 7 shots on goal. Defense midfielder Matthias Stingl led the Riverhawks offense with 4 shots by the end of the night. The River Hawks outshot the Warriors 11-5 while also defensively holding the Warriors to one shot in the first half. The early substitutions of Damian Attidore and Reziq Banihani in the late minutes of the first half inserted life into the Riverhawk offense, which had been testing the Merrimack defense.

A close chance for a River Hawk goal came in the early minutes of the second half when a perfect cross from Damian Attidore found the foot of Sancho Maroto Tobias. The shot struck the underside of the crossbar only to be cleared by the Warriors.

A cross from Matthias Stingl from outside the box came only a few minutes later, but went just inches over the goal. Lowell continued to control the midfield creating chances and pressuring Merrimack’s defense.

“A typical result,” said Head Coach Christian Figueroa. “Having a lot of control of the game especially in the first half. It’s been the story of our season so far. We’re giving away opportunities”.

Merrimack’s lone goal came from an inattentive River Hawk back line in the 74th minute. Merrimack’s Stefano Pesenti crept in on a goal kick, stealing the ball from a lone defender inside the penalty area leaving goalkeeper Christian Miesch helpless to defend. Immediately after the Merrimack goal, Lowell came out on the counterattack with Borna Miklic making a great run and finding the back of the Warriors net just minutes after Pesenti’s goal. However, the goal was  called offside by the linesmen.

Another missed opportunity came again from the right foot of Josh Ofosu, who caught the Warriors defense off guard with a deep ball to the head of Reziq Banihani. But, freshman Merrimack goalkeeper Alvaro Rodriguez, who ended the night with 7 saves, was there to dash the hopes of the River Hawks.

Moments later, another River Hawk defensive miscue created a loss of possession and a risky foul inside the box almost gave Merrimack a penalty kick in the 80th minute. Luckily for Lowell, the play was deemed clean by the referee. The River Hawk offense continued to put pressure on the Warriors into the final minutes of the match with Jonathan Ferreira taking the final shot on goal in the 84th minute.

Despite the tough loss, last Tuesday was a good showing by the UMass Lowell Men’s soccer team who will hopefully take the lessons they have learned against Merrimack to their next game against UMass Amherst again at Cushing Field on Sept. 21.