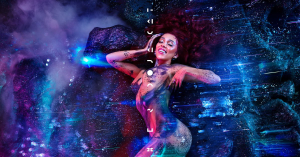 On June 25 of this year, talented rapper, singer and songwriter, Doja Cat, released a brand-new album, “Planet Her”. This release left fans feeling far beyond excited. It should come as no surprise that once again, she exceeded all expectations.

The first track, “Woman”, is an upbeat song with a focus on wanting to be romantically involved with someone. The lyrics incorporate ideas about family and utilize the sensation of touch. Doja Cat then presents a greater concept into the mix that revolves around female empowerment. “Woman” expresses the evident competition amongst women which is encouraged by men in our society.

Transitioning into the next song, “Naked”, Doja Cat continues with a similarly cheerful sound which accompanies another theme pertaining to women, the feeling of being comfortable in one’s own skin. Through Doja Cat’s explicit descriptions of wanting to be sensual with a man, she says for him “to get comfortable, it’s only natural,” to reassure him, as well as asking permission repeatedly in the song to take each other’s clothes off.

Compared to the previous two songs, “Payday”, featuring Young Thug, is where Doja Cat takes a slight turn. Although the tone remains lively, the topic shifts focus to fame and fortune. It highlights her excitement in what she possesses and her optimism in what has yet to come.

The mood of “Get into It (Yuh)” has a constant energetic rhythm, which contrasts the previous songs in both, vocals and topics. This song continues the theme of embracing all that you have and living life to the fullest.

The fifth song featured is “Need to Know”, where Doja Cat expresses self-confidence in her sexuality. In the music video, she is approached by a man while out with her girlfriends for the night, and the lyrics “Baby, show me what it’s like/ I don’t really got no type,” highlights her curiosity. The video gives an “out of this world” experience, displaying vibrant colours and portraying characters as aliens.

Forwarding the theme of sexual desires, “I Don’t Do Drugs” features well-known pop artist, Ariana Grande. The song compares being lovestruck by a someone to an addictive drug. In the song, the lyrics say, “Needed a fix of you, not just a kiss from you,” indicating that yearning for someone that you simply cannot get over.

Similar to “I Don’t Do Drugs”, “Love to Dream” is about the pain and regret that is felt after a failed attempt at love. It emphasizes the inability for Doja Cat to give it her all. She fantasizes about love, but is at a loss when it comes to the reality.

The tone of the ninth song, “Been Like This”, transitions from an upbeat style to a slower tempo. The challenges one faces as a result of falling in love are still illustrated in this song. The chorus proposes that Doja Cat’s partner has changed for the worse which she will not put up with anymore.

“Imagine”, motivates people towards higher aspirations. The lyrics translate to believing in one’s own talents and paying no mind to the haters who doubted their abilities.

The transition into “Alone” changes as it circles back to negative emotions and a steady rhythm. It focuses on Doja Cat’s independence while her, now, ex-partner is in sufferance. The song is sung with the purpose of finalizing the breakup and establishing that the other person only realized what they lost after it was gone.

In the final song of the album, “Kiss Me More”, featuring SZA, concludes with a flirtatious and sensual vibe. This hit song highlights the lyric, “Can you kiss me more”, in all sorts of cheeky and passionate ways.

“Planet Her” forms this fictional planet that is ruled by this queen in the making who is powerful and unfiltered. The album has proven to be a success in several aspects with each song demonstrating entertaining, yet empowering themes.