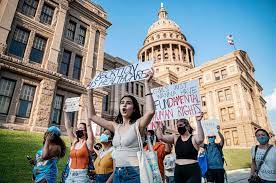 (Photo courtesy of Sergio Flores/The Washington Post/Getty Images) According to the CDC, nearly half of pregnancies in the United States by 2011 were unintended, and the reported percentage was higher just three years before in 2008.

According to the CDC, nearly half of pregnancies in the United States by 2011 were unintended, and the reported percentage was higher just three years before in 2008. If the trend holds, then by this year, there should be a lower but still sizable number of unintended pregnancies. Nearly 1 in 2 pregnant people don’t in- tend to be.

Unless you’re trying to conceive, it can be very easy to be unaware of any preg- nancy until after the six-week mark, where very minimal fetal development has occurred. They’re not even called fetuses yet, they’re still called embryos. At that point in time, the embryo has no brain activity, just a bundle of cells which have electrical signals that play a part in future heart development. This is just an arbitrary cut off point, not even an indication of a viable fetal heartbeat, that will now set the precedent for other movements to pass similar laws.

Some people and organizations argue that it is religious beliefs that cause them to seek these measures, but really, it is the personal beliefs of the few being imposed on the many. Many Jews do not even be- lieve that embryos have souls at this stage of development, nor do other religious groups. This law does not consider the personal beliefs of others. It is a blan- ket law meant to protect something that not everyone agrees happens and is only based on conjecture.

The situation is ironic, especially in the context of the pandemic we are all living in. The same people who argue for these laws are also the same people who fight against mask mandates and vaccination requirements. It is astounding that these individuals believe that mask mandates and vaccination requirements are violations of their personal freedom when they try to impose violations of personal freedom on others through anti-abortion laws.

Insidiously, the abortion ban targets not only people seeking abortions, but also those who dare to help them do so. According to Texas Right to Life, this is to ensure that those who make money off abortions are the ones to pay the consequences. Instead, it reads as a message that pregnant people are not to be

helped and that they are on their own. It removes autonomy from those who are pregnant by placing the choice on others. It is a warning to others: help any pregnant person and you will pay. It isolates pregnant people and makes it difficult for anyone to help them.

With the passing of this law, the Texas government has placed a bounty on the head of every person involved in abortion care, even those who are barely tangential. While the Texas government is not personally helping each case, it is still rewarding those who win cases against those convicted of aiding and abetting abortions. The law opens the gate for pregnant people to be controlled by abusive parties, even in circumstances of rape, as an abusive person only has to threaten a lawsuit backed by the state government to maintain control.

There are other options for those seek- ing help, such as ordering a package from Plan C, an online provider of abortion pills. It is important to avoid Crisis Pregnancy Centers as they mainly exist to dissuade people from abortions.

Even with some of these options, they leave many people in trouble, especially low-income individuals. Wealthier people are able to seek the care they need, even if they argued for laws that made such care impossible or harder for others to access. This is the way it seems to go, the powerful attempt to exert control over others while ignoring the ramifications of control for themselves.

This abortion ban law is just that, a bid of control. Instead of advocating for means that would effectively decrease abortion rates, such as expanded sex edu- cation or aid for expectant families before and after birth, it seems that Texas would rather criminalize desperate people.

Knowledge is power. It is terrifying when it feels like your choices are being taken away, only leaving you with the choice that others have made for you. Stay informed and make sure to do your research. Some places have biases that may adversely affect you or mislead you, whether or not it is intentional.