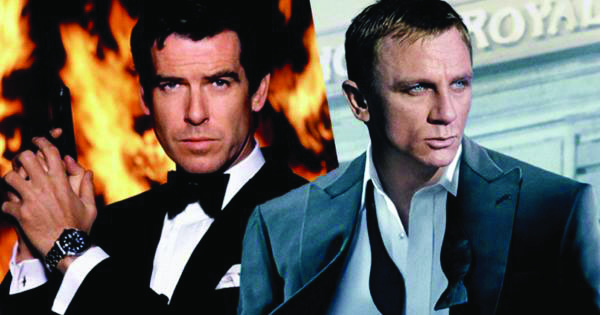 His name is Bond, James Bond, and very soon, Agent 007 is about to shine in the 25th installment of the film franchise, “No Time to Die”. In this final stretch of anticipation, there are plenty of franchise entries to revisit in the meantime. To focus on relevant entries, here are the top four Bond film recommendations of the modern era:

Directed by Roger Spottiswoode, “Tomorrow Never Dies” isn’t the first Bond film of the modern era, but it was one of the earlier ones to retrospectively modernize the best of the franchise. Pierce Brosnan’s second outing as James Bond sees 007 on a mission to stop a media baron from manipulating Britain and China into a Third World War. This is a classic over-the-top narrative setup which has been featured twice before in the franchise. Still, in an updated fashion, this film knows exactly what it is doing in attempts to remain faithful to the Bond formula.

Ingredients of the film such as heavily stylized action sequences, car chases, gadgets and sets symbolic to the 90s post-modern aesthetic are emphasized by David Arnold’s lighthearted and upbeat score. However, this soundtrack may overshadow the more serious themes about the dangers of mass media in the digital age which are never fully explored. Nonetheless, this film never loses focus on prioritizing its entertainment factor over everything else. Even compared to more recent entries sharing similar themes, like “Spectre”, “Tomorrow Never Dies” is far more enjoyable to watch.

With this film, director Martin Campbell set the gold standard for the first modern Bond film. Setting the stage beyond the character’s Cold War roots, James Bond proved to the world his relevance into the 90s where 007 faces off against former agent 006, who is in possession of a weaponized satellite, codenamed Goldeneye. Meeting his match, the theme of old versus new is downplayed in the background only because the spectacle in the stylish foreground is more than captivating.

Pierce Brosnan’s long and overdue debut as James Bond certainly contributes to those stunning visuals in such a naturally charming manner that Daniel Craig could never outdo. Along with the wardrobe, sets and exotic locations, the film brings all these enjoyable Bond elements together with a strong and creatively refreshing narrative. Progressively, 007’s boss, M, debuts as female, where political incorrectness is also acknowledged. Thus, “Goldeneye” is a modern classic that has aged like fine wine and is a perfectly balanced popcorn flick in these respects. Despite its mature themes and significance to the franchise’s history, this is also a film where most of that can be disregarded if one is simply looking for a casual and entertaining watch.

11 years after “Goldeneye”, Martin Campbell returned to direct a spot-on adaptation of Ian Fleming’s first James Bond novel. To bankrupt the criminal accountant, Le Chiffre, so that he runs to the British for safety, Mi6 tasks a young and inexperienced 007 to beat Le Chiffre in a high-stakes poker game. The film follows incredibly close to the 1953 narrative, installing minimal modern tweaks for 2006 audiences.

While this film broke away from nearly every over-the-top trope of previous entries, the down-to-Earth approach of “Casino Royale” breaks even with the boldest decision in the franchise to cast a blond Bond. Daniel Craig proved to the world that a good James Bond comes down to the actor’s performance, not just his appearance. Nonetheless, there is plenty of refreshing charm and wit to this entry. Those who are looking for a classic Bond formula are better off watching “Tomorrow Never Dies”. Even so, the serious narrative of “Casino Royale” undoubtedly has much more to offer.

Director Sam Mendes is well known for films like “American Beauty” and “1917”, and “Skyfall” is no exception to his master craftsmanship. Third time’s the charm for Daniel Craig in this film as he plays a more aged and experienced James Bond in contrast to his previous performances. However, Craig does not fall short of the high standard he set in “Casino Royale”. “Skyfall” sees him face off against a former 00 agent who is out to personally take down Bond and M.

Like “Goldeneye”, “Skyfall” incorporates the themes of old versus new, and in Mendes’ contemporary and exquisite style of cinematography, the mature significance of this film is even stronger. Even with all of these powerful elements waltzing about in the film to Thomas Newman’s score, “Skyfall” is well-versed enough to engage audiences in this quintessential entry to see Daniel Craig shine prior to his final outing as Bond.