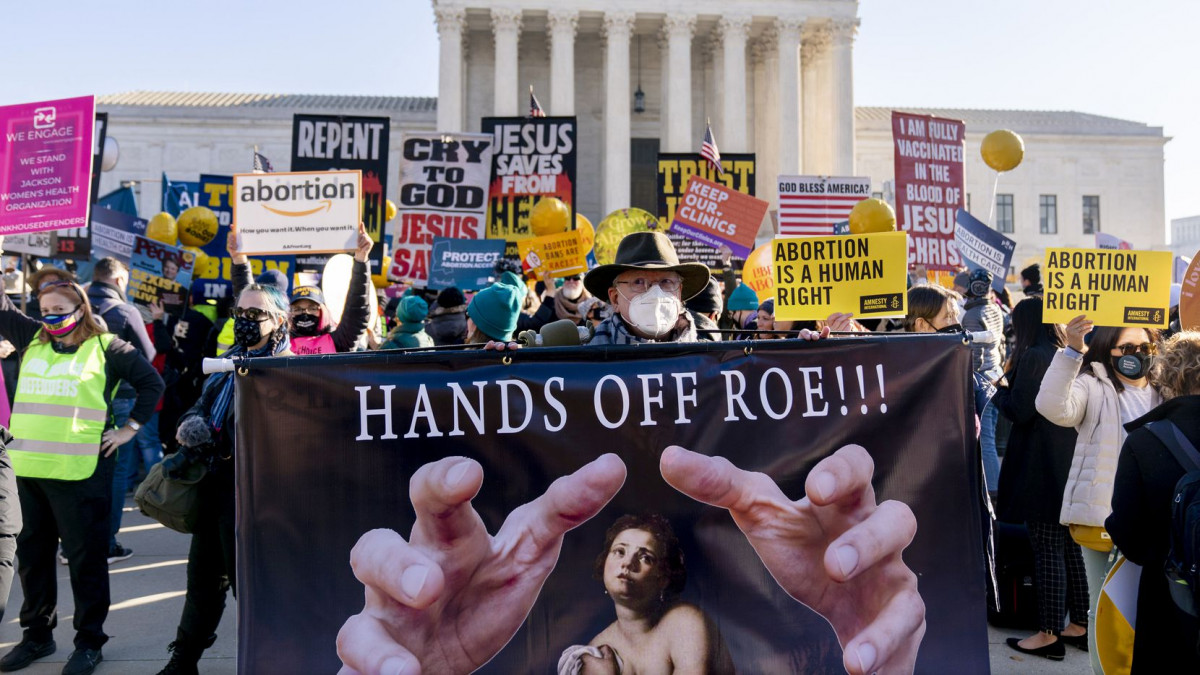 (Photo Courtesy Andrew Harnik of Associated Press) “Stephen Parlato of Boulder, Colo., holds a sign that reads ‘Hands Off Roe!!!’ as abortion rights advocates and anti-abortion protesters demonstrate in front of the U.S. Supreme Court, Dec. 1, 2021, in Washington, as the court hears arguments in a case from Mississippi, where a 2018 law would ban abortions after 15 weeks of pregnancy, well before viability.”

Think about your current situation. Could you handle a baby in your life? I want every man reading this to think about the last assignment you turned in. Now imagine if you put the same effort into raising a child.

I don’t know your grade but child-rearing isn’t on a curved grading scale, and there isn’t a winter break. This isn’t only a woman’s issue–it’s a fundamental human right issue. Although we men cannot carry the baby, we are still an important part of the process. I personally can’t imagine having to care for a child, and I still don’t know how to do my laundry. If I had a child when I was younger, I likely wouldn’t have returned to school and wouldn’t be writing an unwarranted advice column.

Despite our reluctance to share these stories, tens of millions of men have experiences with participating in some way with a woman’s decision to get an abortion. This means it is a personal experience for men, as well as women and non-binary folks. The Texas abortion law bans abortions after the first six weeks of pregnancy before many men and women know they are pregnant.  Reproductive rights give women and men the choice of the circumstances they become parents. Men should be outraged at a law forcing women we know to give birth against their will.

Roe vs. Wade was a step forward for our society, showing we are a nation that values women. Men participating in the movement should focus on the violent behaviors of other men that surrounds pregnancies.

Men need to stop nodding in agreement, start walking the extra mile and use their privilege to protect reproductive rights and women’s health. Women shouldn’t have to do most of the fighting alone. The patriarchy will not submit until men start voicing their outrage.