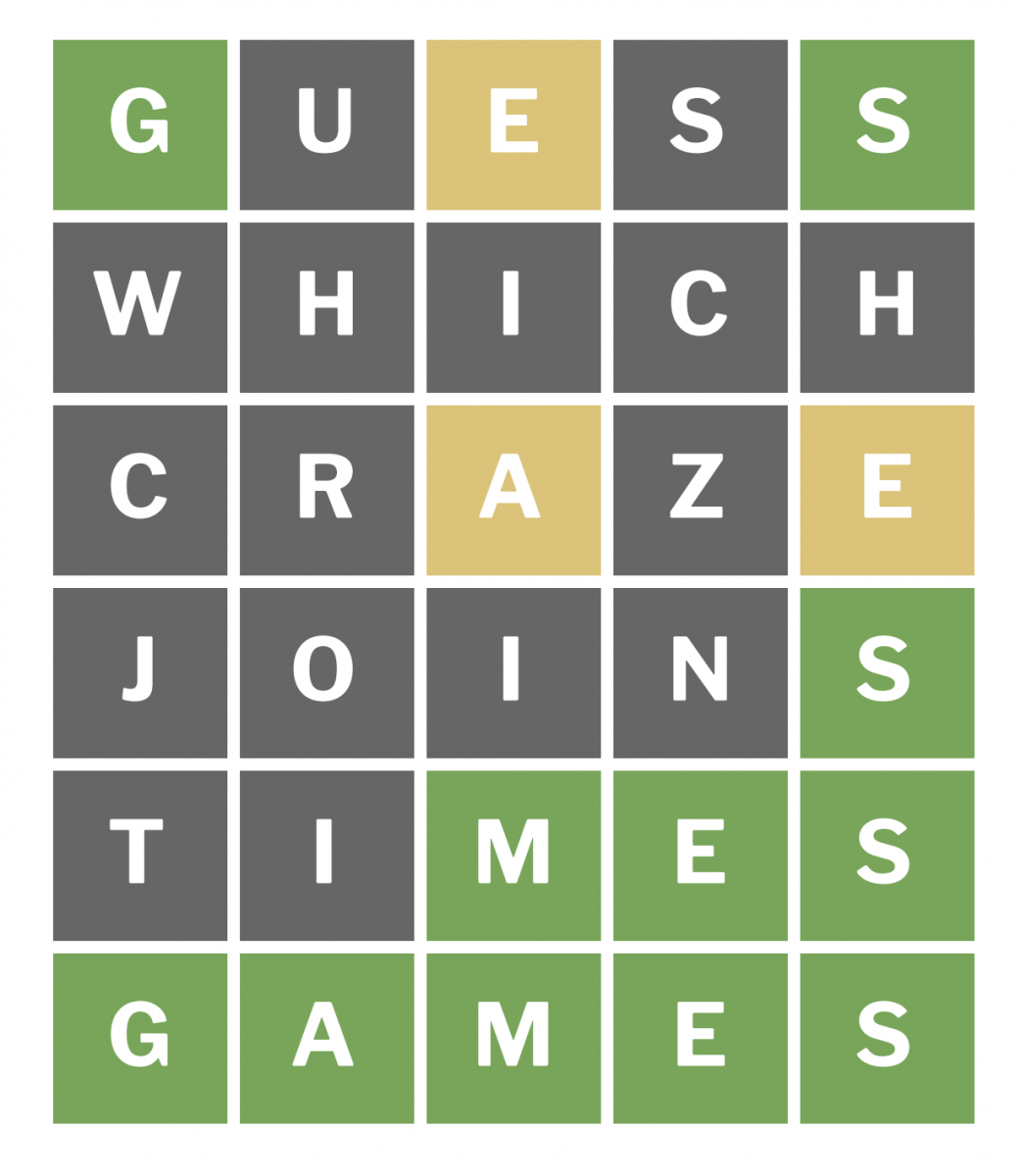 (Photo Courtesy of The New York Times Company) “Wordle” was developed by Josh Wardle and is available to anyone with internet.”

By requiring active engagement for victory, the game feels challenging without being frustrating. Meanwhile, for an extra challenge, players can aim to guess the word in as few tries as possible, beating their friends’ scores. The game even tracks players’ scores for every puzzle, charting them on a bar graph. These tangible tallies motivate players to improve.

Other word puzzles, such as word searches and crosswords, also strike an engaging difficulty balance, but they tend to be much more of a time investment. Those were a popular way to kill time before the digital age, but today there’s so much entertainment that most prefer to spend their time elsewhere. “Wordle,” on the other hand, never takes more than a few minutes out of one’s day. There is also direct incentive for players to keep up with the game—the streak. If a player plays Wordle multiple days in a row, the “Current Streak” increases. Missing a day means failing to maintain the streak, requiring players return daily in order to prevent that.

No analysis of the game’s intricacies changes the fact that it’s an incredibly simple game. Even if it’s fun for a short time, why do players keep coming back? That’s a problem that “Wordle” solves through its most commonly-questioned design choice: the ability to only play once per day. It’s common to see players claim they’d like to play “Wordle” multiple times per day, but if they could just keep playing until they got tired of it, they likely would get tired of it. By limiting play, “Wordle” leaves players wanting more, thus keeping players around for longer.

The one-per-day limit also increases the importance of playing well. If players could simply replay after failing, they might care less about performing their best every time. Only having one daily score also makes players more likely to share that score. Most players wouldn’t want to flood their feed with multiple “Wordle” scores per day but are fine posting just one. And the longer that players stay engaged, the more they think about the game and bring it up in conversation, spreading the word of “Wordle” even more.

As more people play the game, talk about it and share their scores, more and more users are exposed to “Wordle.” It’s gone viral in the most traditional sense, spreading by word-of-mouth from friend to friend and follower to follower.

In today’s era, with algorithms, influencers and corporations controlling what users see, it’s easy to forget that in the early days of the net, things got popular through the actions of the average internet user. That’s where “Wordle”  gets its staying power and its legion of players. Just like much of the viral content on the early internet, it wasn’t intended to blow up across the web like it did, according to the game’s creator. As claimed by Josh Wardle on Twitter, he originally created it as a gift for his life partner. Today, it draws in hundreds of thousands of daily players.