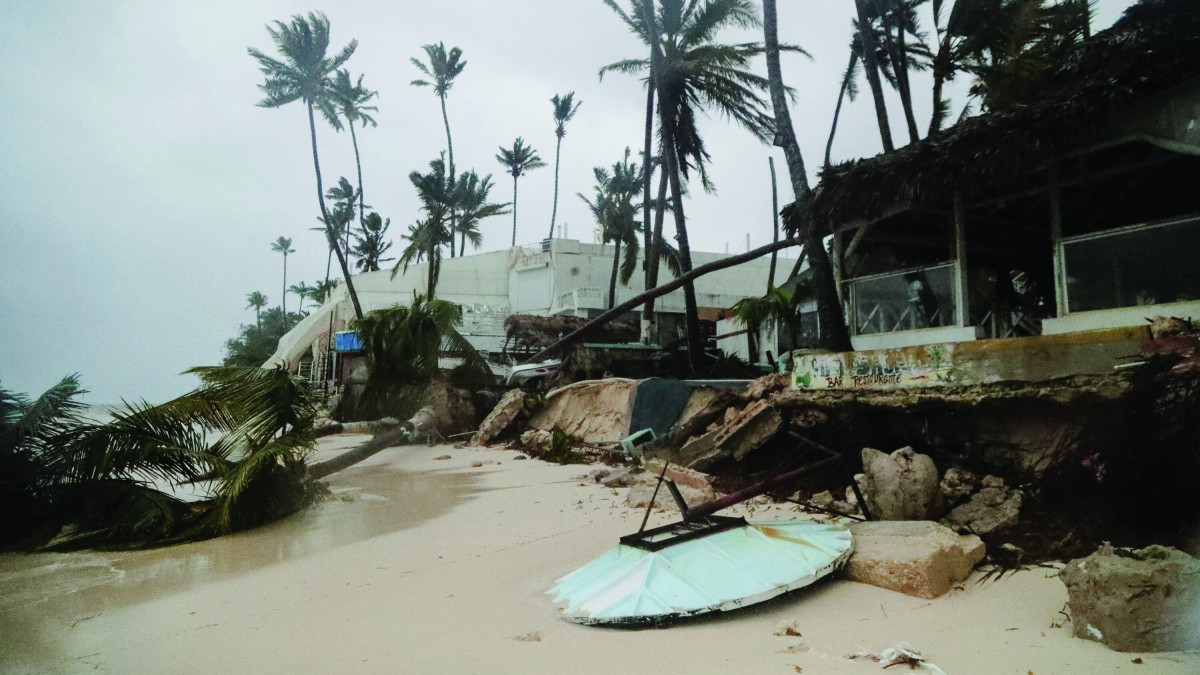 On Sunday, September 18th, 2022, Hurricane Fiona, which was a Category 1 Hurricane, made landfall on the island of Puerto Rico, causing massive swaths of damage and life-threatening flooding to the island of nearly three million people.

“Fiona was first detected as tropical depression on September 14th,” said Dr. Frank Colby, a weather modeling, analysis and forecasting and boundary layer meteorology professor here at UMass Lowell. “This storm was not originally projected to be anything more than a tropical storm, but the storm’s conditions had forced the intensification of the storm at a rapid pace, and everything changed, and it picked up much faster than projected. By Saturday, it was a tropical storm and then it had made its first landfall by Sunday.”

Mari Hennessy , a resident staying who was at a family’s house in Puerto Rico when Hurricane Fiona made landfall on Sunday, September 18th, reported that the trees that were outside of her family home were sliding down the hill as the soil became saturated with water, which led to devastating landslides, killing or injuring many. Luckily, their family is safe, and she was able to get off the island and return to her home on the United States mainland.

“Puerto Ricans are citizens of the United States … So, it is disappointing when help does not come as quick as it should,” said Mari Hennessy. This storm is the first to hit the island in five years, where it was last hit by and devastated by Hurricane Maria back in 2017.

“The biggest effect in these hurricanes that get people the most worried about are the winds and the effects they can carry,” said Dr. Colby said. “Whenever a hurricane reaches hurricane strength, like, for example, the fact that it is now a Category Four hurricane, those winds tend to be in the 130-140mph range, which causes catastrophic damage. Another major threat is flooding, because of all the torrential rainfall that occurs during a hurricane. This can enhance the damage caused by these strong hurricane-force winds.”

Colby also pointed to climate change as a compounding factor for this storm. He said that the ocean is at a higher-than-average temperature, which makes more energy available to the hurricane.

“I think it is pretty clear of how climate change is having an impact on our weather. The warm air in the climate means the atmosphere can hold more water, which leads to more rain and then flooding,” said Dr. Colby. “We’re seeing these major hurricanes form and intensify at an alarming rate, and this is because of the above-average water temperatures, which present moisture for these storms to feast on and grow, which is what causes these storm intensifications.”

“Climate change disproportionately affects the impoverished and the global south,” said Dr. Colby. However, he notes that the ocean will take a long time to cool down because of its high specific heat, meaning it takes significantly more energy to change the temperature of water than required for other liquids.

“We rely on our oceans to moderate the swings of the temperatures in our environment,” said Dr. Colby. “Because of our oceans warming up, this means that there is a bunch of heat that is being stored, which will take a significant amount of time for the oceans to cool down. And unfortunately, these warm ocean waters can and will allow for favorable environments for hurricanes to form and wreak havoc.”

If a hurricane is forecasted in your area, Dr. Colby recommends the National Hurricane Center website to check on your preparedness for a hurricane. Evacuate if possible. If not, be prepared to lose power and have ample food and water available.

“Having a way to receive updates and warnings is crucial to survival. We need to be ready in case a major hurricane does strike,” said Dr. Colby. “Some of the most essential necessities for a hurricane are med kits, canned and non-perishable foods, plenty of water, batteries, flashlights, and radios to remain informed.”