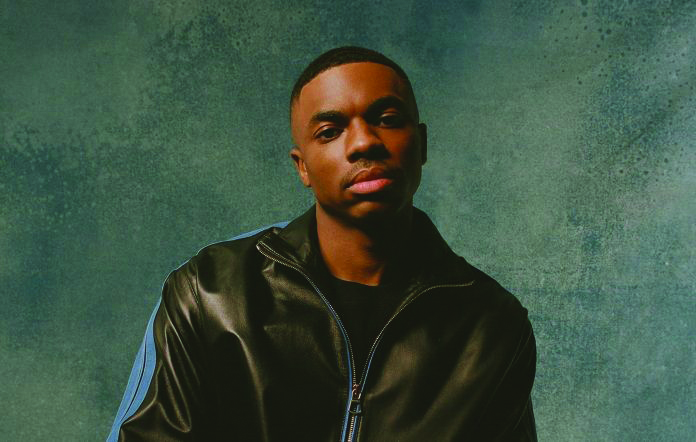 (Photo courtesy of NME) “Vince Staples returns to the music scene after his self-titled 2021 record.”

Vince Staples doesn’t write love songs. He says as much in “ROSE STREET,” off his most recent project “Ramona Park Broke My Heart,” which was released in April of this year. This might not seem like a literal statement, but this album clearly illustrates what Staples means. In fact, the only song that could be categorized as a love song is “WHEN SPARKS FLY.” While the first verse does feel like it could be about a lost love, the second verse reveals the reason for this; the person is in jail after a hit on their house. The concept isn’t fully revealed until the final lines of the song, when two characters are having a conversation that ends with one of them saying, “They said he killed somebody.” Death, both in the physical form but also in the loss of freedom associated with jail, is ever present in Ramona Park. It permeates everything, even their most intimate moments and spaces.

Consider also where “WHEN SPARKS FLY” is placed on the album; between ‘NAMELESS’ and ‘EAST POINT PRAYER’. The former is a spoken word track of two people conversing about the realities of having to shoot at someone. As the song ends, the question of whether one of them has ever shot anyone comes up. They respond, “That’s what they said. Several times, that’s what they said,” and everyone understands what this means. The uncertainty present is not a product of being unaware of their own life but being hyperaware of the scrutiny that they are under by the police, under the looming threat of prison. “EAST POINT PRAYER” is one of the more traditional Staples songs on the album, but even it is not devoid of talks about real and threatened violence against people. That is the reality of living in a place like Ramona Park, which is located on the Northside of Long Beach, CA. There is real value in chronicling this. Vince Staples writes a place narrative that immortalizes it in a way nothing else could.

The album begins with the track “THE BEACH,” which goes immediately into this reality, as he says, “Growin’ up, ain’t had no lights unless it said to check the engine, ‘less we had to spark the wick, show somebody that we miss ‘em.” The people of Ramona Park are threatened also by the violence of poverty. The song closes with gunshots and a laugh track, a commentary on how the public receives the death and dying of those that do not impact them.

If you do happen to be searching for more traditional Vince Staples, look to “AYE (FREE THE HOMIES)” and “MAGIC.” Both songs could have easily come off “FM!”  (2019) and are more like Staples’ traditionally fun music.

“LEMONADE” is certainly a low point for the album. The repetitive chorus, which Staples usually uses to perfection in other songs, comes off as uninteresting and the beat does not save it with anything more exciting than what sounds like a baseball bat even few beats.

The album ends with the track “THE BLUES,” which begins with the line, “If I die on the way to give you my love, please protect me from the world, forgive me for what I’ve done.” To live in Ramona Park is to think like this out of necessity. Staples still feels the need to be protected, even in death. The song ends with the repetition of the line, “Pray for me,” and then Staples allows the waters of Long Beach to wash everything away.

This review almost started with the statement that this is Vince Staples’ best project. It is certainly his most mature, and he has never been more open on a record than this one. However, after a relisten to “Big Fish Theory” (2017), it is too close to call it. There may be an adjustment for fans that loved that record, because gone is the SOPHIE production in favor of a more traditional rap sound. But for any fans of Vince Staples that want a closer look into the thoughts of the artist and the person and into the space that created him, this is the record for them.