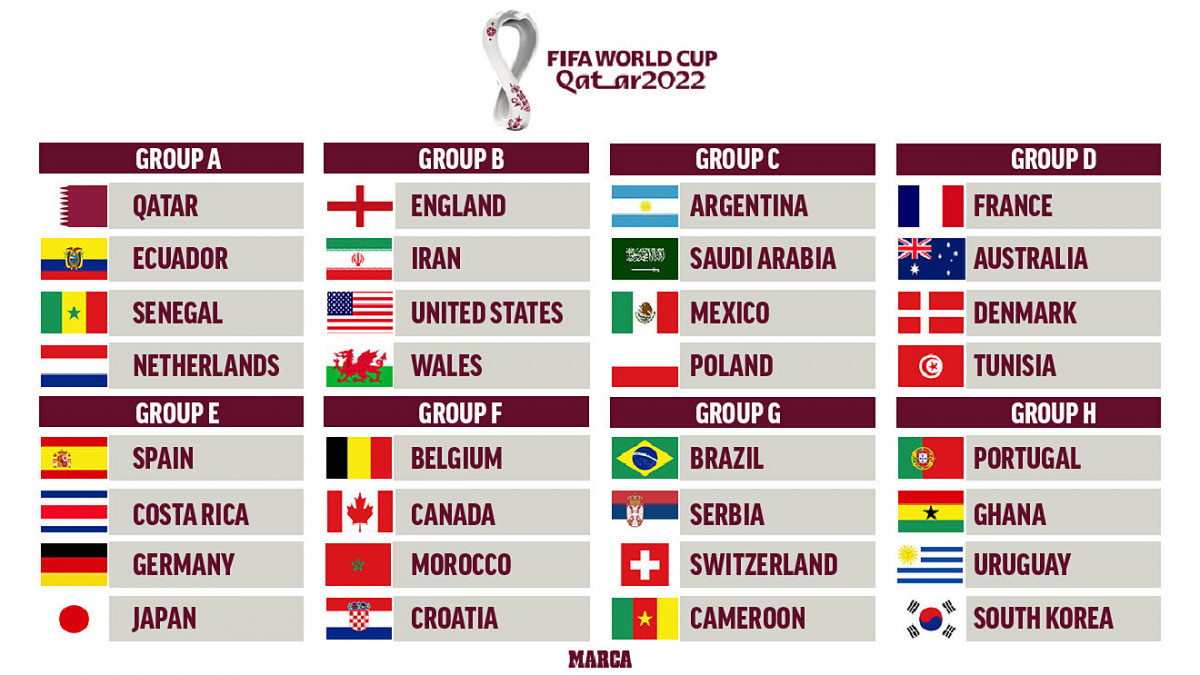 (Photo courtesy of Marca.com) “The final groups for the 2022 World Cup.”

The 2022 FIFA World Cup has finally arrived, and there is a lot of craze in the world of soccer/football. What stinks is that the sale of alcohol was banned in Qatar during the tournament, so everyone must be sober for this year. But onto the groups and the predictions.

This group has a lot of potential to try and cause trouble. The obvious powerhouse of the group, the Netherlands, won’t have as hard of a time here as some of the others might. Still makes for great games.

Group B: England, Iran, US, Wales

It is 1776 all over again with England vs America pitted against one another. The English fans will once again annoy everyone by saying “it’s coming home” when they should be saying “we need to stop jinxing our own momentum” instead. This is also one of the tougher groups somehow.

This stage is filled with talented teams. In the past, Mexico proved it has the capability to win, but seemingly can’t because of something holding them back. Argentina must win because this is Lionel Messi’s last World Cup as a player. Poland has a chip on its shoulder after a disappointing 2018 campaign. The Saudis are on the up and up. Probably the toughest group right now.

The defending champs are back in the world cup and in one of the weaker groups no less. The real other challenge is Denmark; recently, Denmark has been looking like legitimate World Cup contenders. Maybe this is an easy group. Time will tell.

Well, this is certainly an interesting group indeed. Two European powerhouses in Spain and Germany, and an up-and-comer in Costa Rica as well as the masters of all things anime in Japan. Especially since 3 of the 4 teams in this group made it past group stages in 2018, this is a group to watch closely.

Translation: Canada has finally made it back to the World Cup for the first time since 1986, and with a few worthy opponents in the mix as well. Belgium and Croatia are really good and should make for a really good challenge.

Well, Brazil finally made it back to the World Cup. Will they not fall flat in the playoffs this time, or will it be a repeat? Especially since Serbia and Switzerland are decent teams, again, time will tell.

May FIFA present to you the weakest group in the entire FIFA World Cup. The only legitimate threat here is Portugal. The next best is Uruguay. It just seems wrong to have this combination of teams, as it just makes it a cake walk for Portugal.