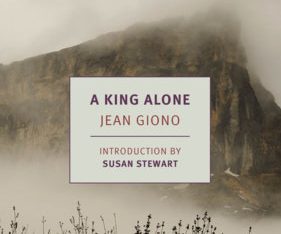 “A King Alone”, written by French author Jean Giono (1895-1970) in 1947, transports us to a remote French village in the Alps where chilling events happen in a sea of snow and fog.

The story revolves around mysterious police captain, Langlois, in three stories connected by the motif of blood. The first concerns a kidnapper named Monsieur V. who terrorizes the town. The second is about a wolf that kills livestock with unusual brutality, and follows the efforts of the Louveterie Corps (The Wolf Hunting Corps) to hunt it down.

The final narrative is about Langlois’ relationship with three women: Sausage, an innkeeper, Madame Tim, a friend of Langlois’, and Delphine. Langlois becomes more unknowable as the book unfolds. It comes together in a fitting ending for the village and the man.

“A King Alone” gives almost nothing about its characters or its plot away, and this is especially true when it comes to Langlois. Like the landscape of the town, the words constantly shift around him and his intentions, never revealing why he does things.

This is achieved by Giono’s use of an unnamed, semi-omniscient narrator who is recounting the story thirty or so years after the events of the book happen. He frequently digresses from the narrative at hand, telling us about his own thoughts, the landscape or certain roads that only come into play later.

The most complicated section of the book is the third, which is a series of open quotes that seem to be Sausage’s narrative about Langlois but could also be the collective thoughts of all the villagers. Since no one understands what is happening with Langlois, and because there are so many layers involved (specifically the fact that the section is about a man recounting an old story about Sausage who is recounting an old story about a man whose story is unknown), it is left to readers to work out their own versions of events.

The book also gives too little away for there to be a satisfying ending. It reveals as much knowledge about Langlois as the villagers do, which is nearly nothing. Furthermore, the importance of blood in the story is too vague. It shows up at pivotal points in the book and has animals involved each time, but because of the differences in the three stories and the failure to establish anything concrete about Langlois’ thoughts, the motif is not as effective as it could have been.

To Giono’s credit, however, he does write in an engaging style. The prose is as lean as Ernest Hemingway’s, and the setting he creates is as cold and rich as Jack London’s. It is easy to get engrossed by the book’s atmosphere and  the task of trying to understand and analyze Langlois.

Despite being a difficult book that leaves readers piecing things together, “A King Alone” is written well enough to warrant a read. Its characters are unique and likeable, and the character Langlois is truly a puzzle. Giono’s book about a snowy little village in the Alps is ultimately a mystery and may forever be so.