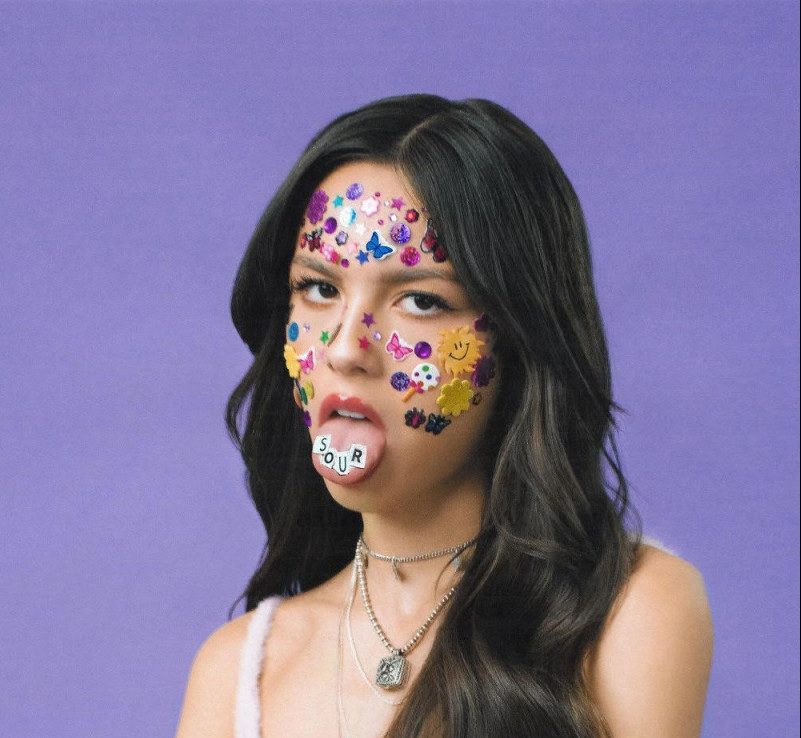 On May 21, 18-year-old, Olivia Rodrigo, released her internet-breaking first album, “SOUR”. The album contained her well-known, previously released songs, “drivers license” and “deja vu”, along with newer hits like “brutal” and “happier”.

Rodrigo has been in the public eye since a very young age. Many know her from the Disney series, “Bizaardvark”, in which she played one of the main characters, Paige Olvera. Later, she took on the role of Nini Salazar-Roberts in “High School Musical: The Musical: The Series” on Disney+. Since then, she gained popularity for her music.

“drivers license” was one of her most known and popular songs, quickly gaining popularity as soon as it was released. Not only was it popular for its heart-wrenching lyrics and beautiful music, but it also brought a lot of attention to who or what she wrote the song for.

Rumors arose that Rodrigo’s song is about her breakup experience with her “High School Musical: The Musical: The Series” co-star, Joshua Bassett. This also caused drama with another singer, Sabrina Carpenter, who was rumored to be mentioned in the song lyrics, “and you’re probably with that blonde girl.”

“brutal” was the first song of Rodrigo’s album, and soon became the favorite of many of her fans. The style of music is different compared to the rest of the songs on her album, leaning more towards a rock style of music. She sings about the hardships of being a teenager and the weight of the expectations everyone seems to have of her.

People quickly fell in love with the angsty vibe Rodrigo had in the song. Many fans were able to relate to lyrics such as “and I wish people liked me more” which are spread throughout the song. Rodrigo covers her problems with society today and how brutal it is to just be yourself in the world.

“deja vu” was another song Rodrigo released long before her debut album. This upbeat release had fans enticed even before she released her full album. The lyrics resemble the memories one has with their ex and the idea that the new person they are with is getting the same memories and experiences.

Olivia Rodrigo’s “good 4 u” was another song that was released before “SOUR”. The lyrics express the sour feeling many people feel after a bad breakup.

The lyrics follow Rodrigo talking about an ex and how they seemed to have moved on from her so fast, now dating someone new, while she is still there thinking about him.

Rodrigo’s album didn’t just show the angry feelings asssociated with breakups. A lot of the songs found on her album express regret and sadness of what had happened in the relationship.

The lyrics of “enough for you” were more about her own pain rather than her wishing pain upon an ex. Rodrigo writes that she had tried her best for an ex. It shows how much anguish one can have at the thought of never being enough for their significant other.

“happier” is another one of Rodrigo’s songs that show more pain and sadness than anger. The lyrics express the pain of holding onto a person who she once loved, but who has already moved on to a new relationship. It is a pull back from her other songs where rather than being angry at the fact that the ex was moving onto someone else, it showed how devastated she really was.

With a similar concept to “brutal”, Rodrigo’s “jealousy, jealousy” was another rather popular song. It covers many of the problems and struggles young adults experience today like how envious people can get over others. Many today have always been jealous of others’ looks and achievements, wishing that they could have what others do. This sour feeling is just another example of the theme of Rodrigo’s album.

Olivia Rodrigo also released more songs like “1 step forward, 3 steps back”, “favorite crime”, “hope ur ok” and “traitor”. In all, her music and lyrics carry the theme of “SOUR”: the sour feeling of anger when an ex treated you badly when they were loved so much by you or the sour feeling of sadness and regret from being unable to forget the good memories with an ex.

Rodrigo hit many fans in their hearts, making them feel and understand what it truly feels like to be betrayed.