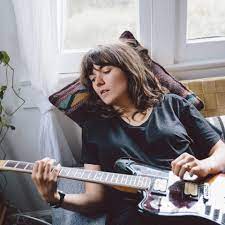 With her unmistakable Sheryl Crow-like vocal delivery and Tom Petty style guitar hooks, Australian singer-songwriter Courtney Barnett returns with her fourth studio album, “Things Take Time, Take Time.” A softer and more reflective release of the well-crafted, catchy pop songs and memorable choruses that have made Barnett one of the leading female rock guitarists and songwriters of recent years.

The lyrics on “Things Take Time, Take Time” show that Barnett has fine-tuned her unique songwriting style. Many of the songs contain her usual witty lyrics with lines such as “If loving you is a crime/ Then gimme those front-page headlines/ Across the country or worldwide,” or “Don’t stick that knife in the toaster/ Life is like a rollercoaster.”

Yet, the lyrics of the album show a greater sense of maturity with the topics of fear, bong rips, or self-doubt that are on her previous albums being absent: instead, the songs focus on acceptance, fond memories, and settling down with lines such as: “I hear all your fears/ And they are understandable, my friend/ Why don’t you let go of those ideas?,” and, “Maybe tomorrow could be time well spent, reflecting/ On all the little things you keep projecting,” and “Oh, what a day, and congrats on the keys to your place/You’ve escaped the rat race, as they say.”

Barnett weaves short imaginative vignettes of everyday life with lines that contain deeper messages such as, “The tress are turning green and this springtime lethargy/ is forcing you to see flowers in the weeds,” and “I need reminding that I got feelings too/ And I tried my best to hide them.”

The production of “Things Take Time, Take Time,” is stripped away in favor of more melodic vocal elements. However, Barnett’s guitar is still the focus, with every other instrument pushed to the back, creating a cleaner sound and making the album seem less frantic than her earlier albums. Songs such as “Here’s The Thing,” and “If I Don’t Hear From You Tonight,” slowly drift along with their melodic guitar parts and sparse rhythm.

There is a noticeable shift away from Barnett’s prior releases’ fuzz and reverb-soaked guitar tones. Instead, a chorus pedal makes her guitar tone resemble the soft, wavy sounds of pop songs from the ’80s or current dream pop. The use of electronic-drum samples and loops adds to this nostalgia.

Songs like “Sunfair Sundown” and “Here’s the Thing” are wistful songs that wouldn’t feel out of place in an ’80s movie, while other songs such as “Rae Street,” feel more akin to Bob Dylan.

Despite these additions, the songs still sound like Barnett, and there isn’t a bad song on the album. Still, there isn’t any major stylistic shift, with “Turning Green” being the only exception on the record. The song’s repetitive driving electronic drum and bass pattern and almost three-minute-long guitar solo with its mix of noise and off-notes is the only song that challenges the listener and showcases how extremely talented Barnett is as a guitar player.

Despite not taking any drastic musical chances, Barnett delivers another solid rock/pop record that displays her strong songwriting ability and instrumental craftsmanship.