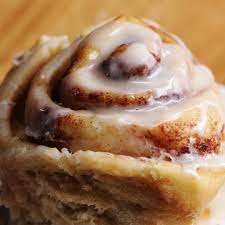 (Photo courtesy of Tasty.co) Cinnamon buns are pastries made with cinnamon.

Fast food options exist in abundance here in the United States, and they hinge their popularity on just how convenient they are. If we spend a little more money, a little more time, could we make these popular fast food recipes in the comfort of our own homes?

That is precisely what YouTube creator, and former fine-dining chef, Joshua Weissman aims to address in his “But Better” series. “But Better” is a series in which he takes famous fast food recipes and makes them from scratch. Weissman created the series in an effort to expose the mediocrity of fast food joints while empowering viewers to try out his recipes instead. One video that has become very popular is his Cinnabon cinnamon rolls video.

“Now Making Cinnabon cinnamon rolls may prove to be just as easy if, not easier,” Weissman said.

The recipe calls for many items that may already be in one’s kitchen: cinnamon, flour, sugar, milk, yeast and eggs, among other ingredients. Buying the ingredients listed in the recipe would not be too expensive either. The cost may be between $25 to $35, depending on where they are purchased. The recipe yields around nine, two-inch thick cinnamon rolls which would put them at a little more than $2 per roll.

Weissman’s recipe calls for cinnamon, brown sugar and muscovado sugar. Simply whisk together one cup of brown sugar with two and a half tablespoons of cinnamon. The product at this point has a rich-dark brown color that smells very sweet.

You will need to drop the dough out of its bowl onto a lightly floured work surface, and then roll it out in the shape of a large rectangle. The dough should end up being about one quarter of an inch thick. Next, you need to spread the unsalted butter over the dough, and then spread the cinnamon filling over that. It should essentially look like a square pizza with the dough on bottom, then the butter and then the filling.

Now, you will need to accomplish the “roll” part of “cinnamon roll”. This next step is really the only point in the process where things are moderately difficult so make sure to be methodical. Simply roll the dough tightly into itself, but make sure the surface has a sufficient amount of flour. Once it is rolled it’ll essentially be a log, and will need to be cut into nine sections. Place the nine, two-inch thick sections into a lightly greased oven pan, and allow them 30 minutes to rise.

Then begin prepping the frosting. The recipe calls for cream cheese, powdered sugar, vanilla and whole milk. Mix these ingredients together, and it should create a creamy mixture that tastes incredible. The sweetness of the powdered sugar is complemented by the vanilla flavor. The mixture should not be too runny as it needs to be able to sit on the rolls.

Once the 30 minutes is up, put the rolls into the oven at 375 degrees Fahrenheit, and bake them for 15 to 20 minutes. After they’ve cooked all the way through, set them aside for 10 minutes to cool, and then glaze with the frosting.

Following this recipe, it took three hours to go from a novice baker with a collection of his mom’s ingredients to a novice baker with delicious cinnamon rolls. The time it takes to make these may seem like a lot, but the end result is worth it. The dough comes out flakey and golden brown. When adding in the sweetness of the frosting and the slight crunch of the cinnamon filling, it takes the cinnamon rolls to a whole new level.

Weissman managed to take a lot of the guesswork out of the process by creating a well-crafted recipe which was accompanied by a detailed video. Following along with both is the best way to go about making the rolls, especially if the viewer is a novice. The visuals of the video are important as it shows you, step by step, what Weissman is doing.

This cinnamon roll recipe is a great way to try baking at a low cost while yielding a tasty product that can be served at a variety of occasions.