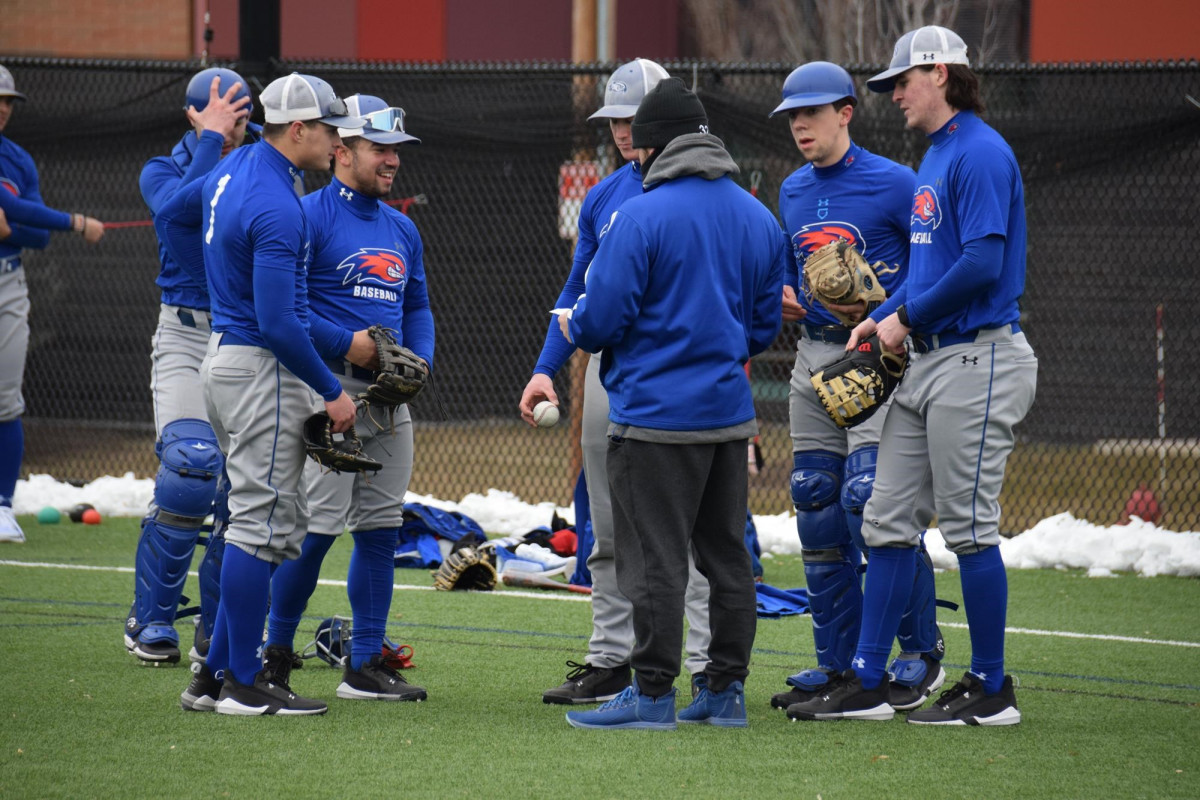 While New England weather can be a fickle beast, the Anemoi cast their favor upon Lowell last week, allowing the River Hawks baseball team to make a few brief appearances into the great outdoors for a series of scrimmages before the start of their season on Feb. 19.

Following a successful fall ball season of exhibition games and the 18th annual Kennyball World Series, the self-styled “Aiken Street Mafia” used the winter months to rest, recuperate, and reload as the season draws ever nearer. Before they head off to barnstorm their way across the southland for the next month, let’s look at the names, stats and storylines heading into the 2022 baseball season.

Before we can look at this season, we need to go back and talk about last year’s campaign. The 2021 season was, for lack of a better term, pedestrian, finishing with an 18-20 record in-conference and losing all eight of their out-of-conference games. The Hawks slashed a cumulative .262/.355/.395 and pitched to an eye watering 5.08 ERA throughout their forty-six-game season. Along with that, they lost their biggest offensive weapon, outfielder Vinnie Martin to graduation coming into this season.

Many names stayed on the roster following last season, including the team’s Friday night ace Sal Fusco (Sr.), fireballer Michael Quigley (So.) and the power bats of Cedric Rose (Jr. IF/C) and Bobby Gallagher (Sr. IF). However, the most intriguing thing about the River Hawks this season is the massive infusion of youth, with a whopping fourteen freshmen joining the team this season, including Jacob Humphry (IF/OF), Brandon Fish (IF), Jake Fitzgibbons (C) and LJ Keevan (LHP/OF). The squad is led by coach Ken Harring, who enters his eighteenth season with the River Hawks and boasts a managerial record of 495-488-1.

The short fall season only saw the River Hawks play exhibitions against Herkimer, NECCO and Boston College, as well as the Kennyball World Series. Although the sample size was tiny, a few players really stood out on the stat sheet. After transferring from Virginia Tech, sophomore infielder Fritz Genther slashed an astonishing .667/.810/1.167 with eight walks and five steals through his 23 turns at the dish. Junior outfielder Matt Tobin put on, arguably, an even more impressive show, driving in eight and hitting the only homer of the exhibition season in just 13 ABs. On the other side of the ball, sophomore Michael Quigley was effectively wild in the colder weather, posting a 3.00 ERA, a 1.222 WHIP, and striking out 11 batters through 9 innings of work.

None of this is to say that there aren’t any challenges in the offing for the River Hawks. While not a perfect bellwether for the regular season, fall ball made two things abundantly clear: the Hawks struggle in the field and their plate discipline is severely lacking. When it comes to the former, the defense posted a measly 0.943 fielding percentage in the 57 innings of baseball this reporter was able to attend. At the dish, UML batters struck out in 21.9% of their plate appearances, with some batters who received an abundance of chances at the plate striking out upwards of 30% of the time. While many a coaching staff would look upon a K-rate in the low twenties as a success, a contact-based team like UML (0.101 ISO) will need as many base runners as it can get if they want to succeed.

It isn’t all doom and gloom for the River Hawks. While the first month of play will bring with it near constant travel and present the biggest hurdle faced in almost three years as they go to play southern powerhouses such as Tulane, Wake Forest and Duke, the America East season looks more promising than it has in years past. While nothing is for certain as the longest season by games played of any collegiate sport rolls along, the view from the stands is a promising one. With a combination of veterans and fresh faces, the River Hawks look to start a new run of excellence this spring.