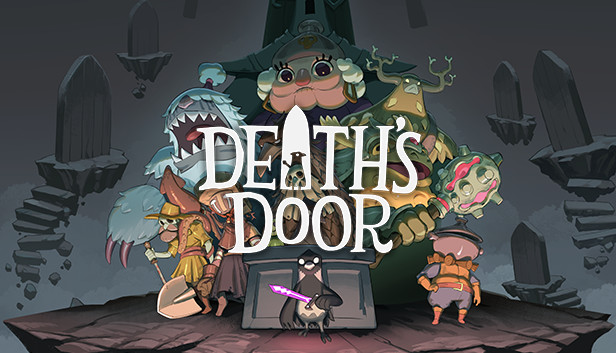 “Death’s Door” is a new and enchanting single-player action-adventure video game from the developers, Acid Nerve. It was released in July of 2021 for Windows and Xbox only to receive so much praise that it was brought to Playstation and Nintendo Switch later that same year.

The story follows the journey of a little fledgling crow who works as a “reaper” for the Reaping Commission Headquarters, an office of the afterlife, where his job is to reap the souls of monsters that are stubbornly bent on a life of immortality, unwilling to leave the world by natural means. Unlike the real world, time is still at The Headquarters, so it is a reapers goal to enter the living world, collect the monster’s soul, and return home as quickly as possible. The fledglings story begins when his contracted soul is stolen from him and it is trapped behind Death’s Door, locked and unable to be powered open. Without this soul, the fledgling cannot return home and time will continue to pass as the crow is doomed to age and die the same as mortals do. It becomes the players duty to travel across three adjacent lands as this fledgling and claim the giant souls from the beings that govern them in the hopes of using them to unlock Death’s Door.

This game is mesmerizing in its combination of morality and morbidity with humor and artistry. It is simple but pleasing in its aesthetics and presents the player with simple game formatting to allow incorporation of unique characters, dialogue, world building, and puzzles. It is equally frustrating and captivating making its range of gameplay as quick as 6 hours to as long as 14. You are provided with melee attacks, ranged attacks, and a dodge action encouraging you to explore and think outside the box when presented with new challenges.

That being said, this game is difficult. The player will die. A lot. But much of that is purposeful and designed into the game. It forces the player to try and retry the same challenge sequences over and over with different tactics. This emphasizes its overall message on death and life; but it also gives the players a chance to collect more petty souls that are used to buy out ability enhancers and help you complete these challenges more efficiently.

What is admirable to this effect is that each level’s replay value remains high for longer than one might expect. With moderately frequent respawn points, the determination of completing a section far outweighs the frustration of retrying after death and it encourages the player to utilize different strategies for different areas of monsters.

The world calls for an unexpected amount of exploration and its combat has some of the most unique and impressive boss fight styles to be found in an indie game of its genre. Each story carries a cartoonishly evil charm that makes the whole journey that much more captivating. Paired with its sinister and secretive backstory, the player is taken through a masterly crafted story arch of remarkable gameplay.

“Death’s Door” sold over 100,000 copies within the first week of its release to Windows and Xbox and has continued to receive high reviews from the biggest publications across the board. It was nominated for several awards including “Best Indie” at the 2021 Game awards and IGNs “Best Action Game of 2021.” It won “Best Game Feel” at the INDIE Live Expo Winter 2021 Awards and “Best Indie Game” at the Golden Joystick Awards along with many other nominations with the biggest games from the past year.

Playing through “Death’s Door”, it’s easy to see how accessible and likable it is for a large range of audiences. It’s the perfect game for dungeon-dwellers, puzzle solvers, explorers, and combat-lovers all while meeting you halfway with charming comic relief and lovable characters that make it no secret why this game is beloved by so many.