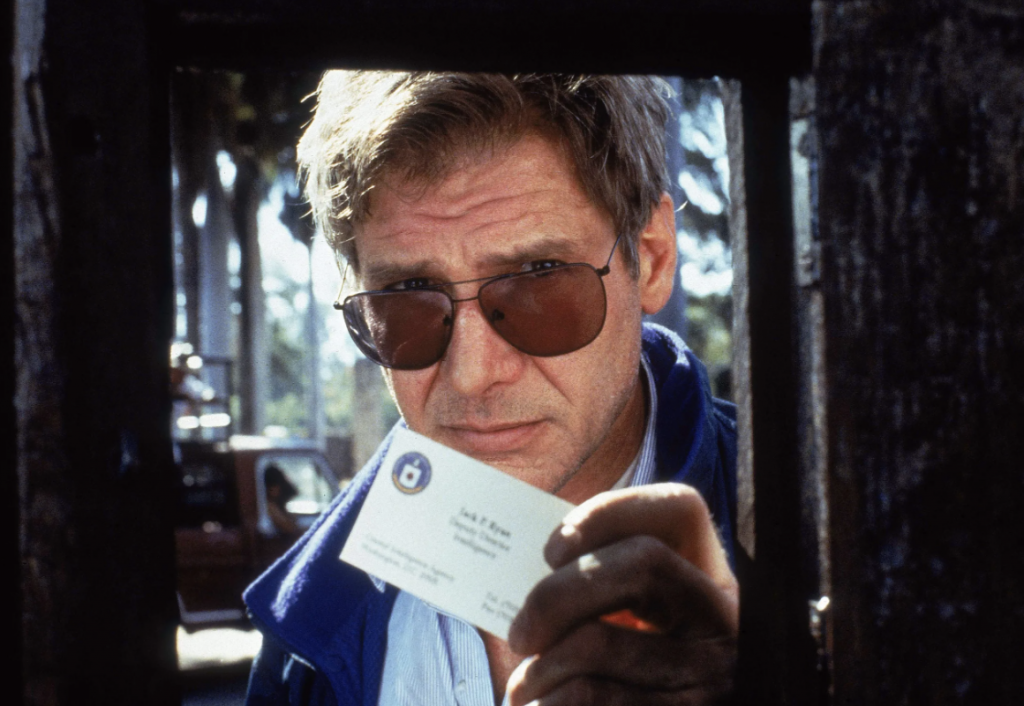 When John Krasinski took up producing and acting in the lead role of Amazon Prime’s “Jack Ryan”, many fans of the Ryanverse considered him the best actor to play the CIA analyst since Harrison Ford. It certainly shows when season two paid many tributes to earlier adaptations of Tom Clancy’s bestseller titles. Season three is currently on its way, but if there is any Ryan adventure to revisit in the meantime, nothing is more clear and present than “Clear and Present Danger” itself.

Originally released on August 3, 1994, Philip Noyce returned from “Patriot Games” to direct the loose sequel “Clear and Present Danger”, with Ford reprising his role as Jack Ryan. Upon returning to the CIA, Ryan is quickly propelled into the role of acting deputy director. While in this role, Ryan doesn’t realize that the other deputy director, Robert Ritter, is helping the national security advisor and president of the United States wage an illegal war against the Colombian Cartel, after a close friend of the American president was killed by several cartel members. But when this game of chess between a vengeful president and incompetent drug lord becomes too messy, Ryan’s investigation is quickly caught in the crossfire.

Once more, this film is loosely adapted from Tom Clancy’s novel of the same title. Though it’s severely apparent how difficult production was for Noyce to adapt the source material. The plot is undoubtedly compelling, given the unfolding challenges Ryan faces. Yet, there are a lot of moving pieces in the film, which may be difficult for younger audiences to comprehend. In addition, the filmmakers clearly took a gamble with trying to balance the high-octane action with political drama that begins to replace the standard espionage at this point in Ryan’s career. The resulting efforts allow this film to be more over-the-top than “Patriot Games”, while remaining grounded.

“Clear and Present Danger” feels much more cinematically appealing as well. It’s still a movie that can be taken seriously for the narrative’s high stakes. Despite possessing one of the greatest action sequences of the 1990s, the action in this film lacks tremendous consistency. Luckily, the remaining duration outside of the action almost caters entirely to spy drama and suspense. Unlike its predecessor, this film’s more subtle thrills stand out just as much as its bombastic energy, matching the entertainment for both occasions.

This works well for the film’s slower pacing. “Clear and Present Danger” has a runtime much longer than “Patriot Games”, though perhaps more rewatchable. Of course, they are two different movies and barely sequential as well. Where “Patriot Games” was more of a spy film at heart, “Clear and Present Danger” is more of a political espionage film. The latter’s narrative certainly carries its superiority, though it leaves little room for the actors to contribute.

Ford is at his A-game, but the script doesn’t give him the chance to convey the emotions of Ryan as he previously did. Meanwhile, Anne Archer’s Kathy Ryan isn’t really involved in the plot this time. Instead, the script favors the political agenda played by the villains, who are hiding in plain sight but are nearly untouchable. Donald Moffat, the nameless American president, and Joaquin De Almeida, the insurgent within the cartel, play their parts with convoluted malice that will intrigue audiences. Alongside Willem Dafoe, Benjamin Bratt, Henry Czerny, Harris Yulin and James Earl Jones, everyone adds a piece of realism to Clancy’s political realm.

James Horner appropriately scores an even better soundtrack than when he did with “Patriot Games” to emphasize this grey world. Ironically, this film’s music is much more patriotic, and perhaps one of Horner’s best and overlooked soundtracks. To coincide, “Clear and Present Danger” is as much of a sleeper hit as its predecessor had been.

1994 was quantitatively the year with the most memorable and critically acclaimed films. This movie contributes to that list, and in another stroke of irony, “Clear and Present Danger” is clearly overshadowed by titles like “Forrest Gump”, “Pulp Fiction”, “The Shawshank Redemption” and even the summer competition of “True Lies.” For those who would prefer a far more realistic spy film to the latter’s action romance, “Clear and Present Danger” is the clearest and present of options. Perhaps not as serious as “The Hunt For Red October”, Philip Noyce prioritized different cinematic ingredients for success at the expense of the source material. Though upon combining the perfect blend of action and suspense with the right cast and musical composer, “Clear and Present Danger” succeeds as the most entertaining Jack Ryan film for both fans and casual audiences alike.