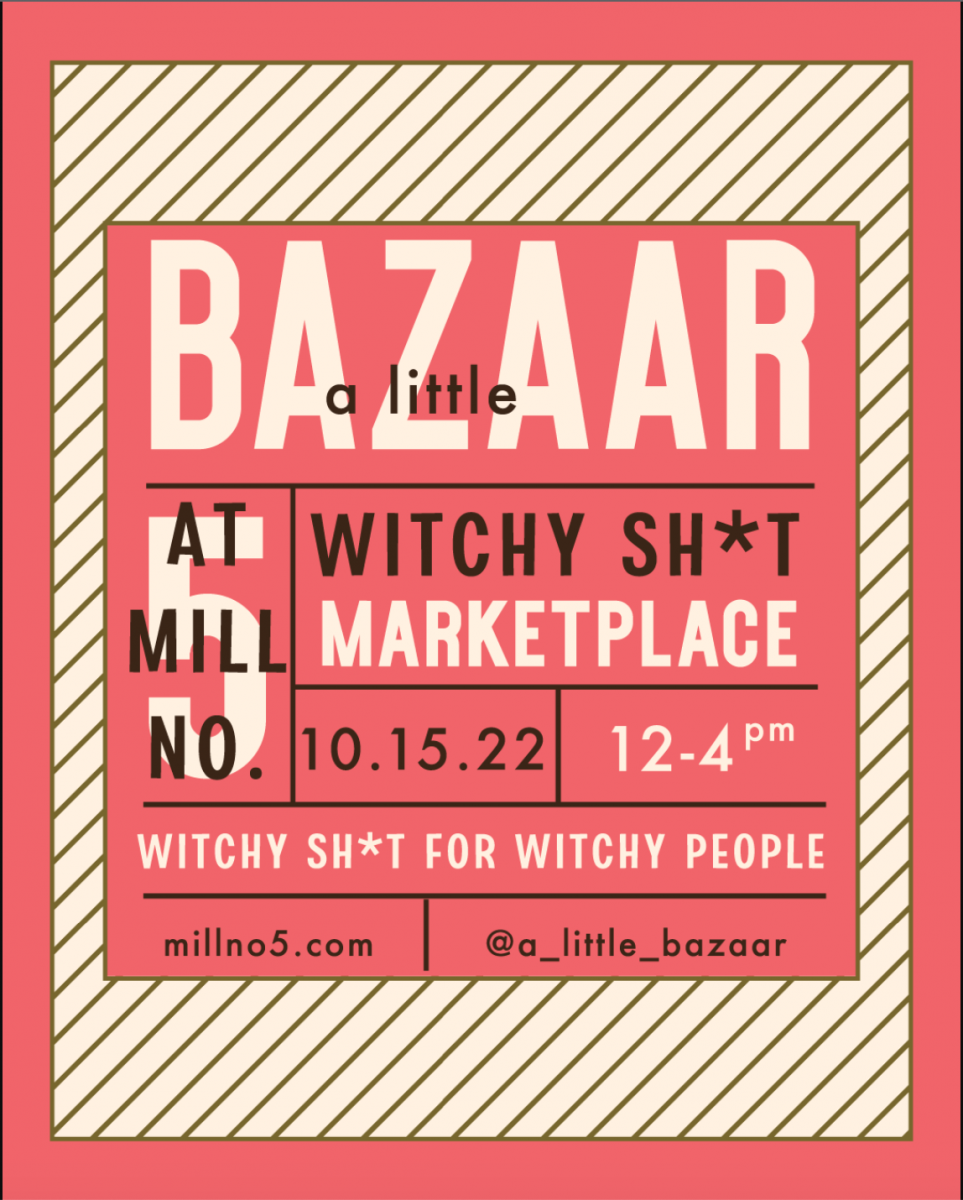 (Photo courtesy Mill No 5 site) “A promo for an upcoming Bazaar.”

This October, spend Saturdays appreciating the spooky and bizarre at the Bizarre Bazaar, a marketplace of vendors set up on the fifth floor of Mill No. 5. The Bazaar, typically titled “A little Bazaar” is a most-weeks year-round event, but this month will have vendors catering towards a Halloween vibe. If a sampling from the first October Bazaar is any indication, it is a diverse collection of prints, wearables, and spoopy to spooky items.

Talking to Andrew “And” Lipsy, first year journalism student, who works there, they said “I recommend everyone stop by… the stuff you can buy there is very inexpensive, relatively, and everyone is super nice all the time.” They recommend the permanent shops as well as the novelty vendors. “[It’s] all small businesses, mostly queer owned. It’s a very welcoming space.” And students can get close by shuttle. “Just take [a] shuttle to the Conference Center and then it’s just an 8-minute walk down the street.”

Kelsey Dudek, a vendor whose business is Ghost in the Meadow, says, “I actually just heard about Mill No. 5 through the grapevine, I talked to some friends who had been to the coffee shop downstairs when they came up for a market, and they told me that it’s a curated show, so it’s always themed and I would be able to kind of fit right in.” Dudek’s booth was by the entrance, displaying her spoopy fiber art. She specializes in “weaving and needle felting” and likes “to do a lot of spooky things, and when [she’s] not doing that [she] do[es] everything based mainly focusing on mushrooms.” This is reflected in her shop’s name, “the whole idea of it is that I think that you can really make something beautiful by combining spooky things and nature things.” She intends to be a pumpkin this year in a costume collaboration with her young daughter, in the theme of jack-o’-lanterns.

Across from Dudek was Eric Gendron, co-owner of ‘Ravenstone’. He would describe the shop’s vibe as “unpretentiously witchy.” Gendron heard of these markets back in 2018 and said, “This is the first market we ever did as a brand in 2018. It’s one of our favorite markets that we do.” He would also recommend the wares of other vendors and the permanent shops on the fourth floor of Mill No. 5. “But I also like to buy as much stuff as I can from the great artisans whose work is featured at these markets.” Gendron will be a crazed shop keeper for Halloween. “For those who may be up in the Lowell area and who like spooky stuff or just really nice crystals and jewelry, I recommend taking a trip to our store in Lynn.” He enjoys 100 grand and recommends “the OG Halloween.”

Farther into the market was Mia Eliopoulos’s shop, ‘Freaks by Me’, featuring a variety of caricature like people that populate her brand. “I absolutely love these markets. I’ve done some in Boston as well, but these are definitely my favorite…. I love the mill and I love this city… they’re great.” She said, “I actually work at coffee and cotton downstairs, so I’m here all the time… It’s just a great spot and it’s growing every day.” She recommends peanut M&M’s and thinks it would be fun to go as a group dressed as an army of giant Minions for Halloween.

Not all vendors are merchants in the traditional sense. To advertise for an upcoming production of Sweeny Todd on November 4, 5, and 6, the troupe Actors Singers had a table and setup where people could get a free photo of getting a close shave by Sweeny Todd, involving a prop knife that released a bloody reside on their necks. Phillip Laks, director, said, “We’re here today mostly talking about our upcoming season… our return to stage since the pandemic.” Those interested in going are encouraged to bake a pie and tag the Actors Singers for a chance to win some tickets. “I used to live like a block away at the Jackson St Lofts… Loved it. I would come all the time. And now… I come back as often as I can.” For his Halloween costume, Laks anticipates taking out a pirate costume he’s added to over the years.

While Mill No. 5 goers may not see any of the above-mentioned vendor at future Bazars, future markets are sure to be as interesting. The vendors were as varied as their wares, having something for everyone who wants to shop with a Halloween vibe in mind, regardless of what Halloween means to any individual shopper. For those interested in setting up a booth as a vendor, Mill No. 5 accepts applications through its website. When asked how they felt about Mill No. 5, Lipsy said, “Come to Mill No. 5, you’ll have a good time.”