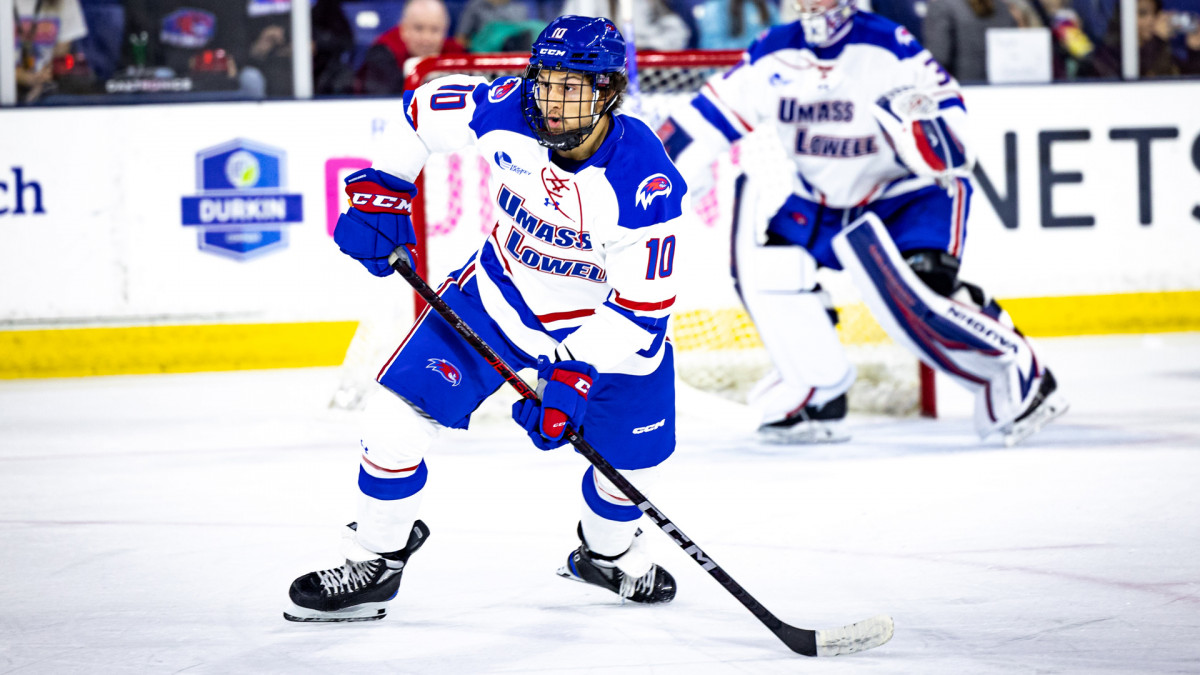 The no. 13 River Hawks came off a busy week in which they faced Hockey East rival Boston College Tuesday night on the road and then faced rival UConn at home Friday night and on the road Saturday afternoon.

After a dominant weekend which saw UMass Lowell sweep the University of Vermont without allowing a single goal scored against them, the River Hawks drove out to Boston on Tuesday looking to continue their winning streak and climb the Hockey East standings.

The River Hawks would not stay quiet for long, however. One minute into the second period, forward Owen Cole would lay the puck into the net and get UMass Lowell on the board. 11 minutes after the first goal, forward Zach Kaiser would follow suit and tie up the game for UMass Lowell.

Despite the sudden momentum shift, neither team could rally together to gain the advantage, and the score remained tied for the rest of the second period. However, six minutes into the third period, Boston College would receive a power play opportunity and forward Oskar Jellvik would score the Eagles’ third goal of the night, putting them up with less than 14 minutes left in the game.

The River Hawks would be unable to score for the rest of regulation, and as time expired they would lose 3-2 and be handed their fourth loss of the season.

In spite of the loss, the River Hawks quickly returned home and prepared to host UConn who would be visiting the Tsongas Center just a few days later. UConn, ranked no. 8 nationally, had only lost one game to Boston University earlier in the season.

The River Hawks came out firing in the first period. Just 58 seconds into regulation, forward Jake Stella would score his third goal of the season and put the River Hawks on the board early.

The UConn Huskies would soon respond on their own, as 3:59 into the second period, forward Chase Bradley would score off an assist from forward Ryan Tverberg and tie the game for the Huskies 1-1.

However, just a few minutes later, the River Hawks would strike back. Assisted by forwards Filip Fornåå Svensson and Brian Chambers, forward Carl Berglund would put the River Hawks back in the lead.

However, the momentum would once again swing in the other direction, as nearing the end of the second period forward Nick Capone would lay the puck into the net and tie the game as the third period rolled around. Neither team would be able to gain the advantage for the rest of regulation, and so with time winding down, the River Hawks prepared for overtime.

With overtime commencing, the River Hawks laid the pressure on the Huskies. UMass Lowell would quickly put the game away as Carl Berglund would score his second goal of the night and close out a thrilling game for the River Hawks with a 3-2 victory.

Off the thrilling home win for UMass Lowell, the River Hawks then traveled down to Connecticut to face UConn on the road the next day.

Despite the quick start for UMass Lowell the night before, the game would start off slow for the River Hawks as UConn scored two goals in the first period back-to-back, one coming from forward Jake Percival seven minutes into the game, and the other coming from forward Justin Pearson just a minute later.

The River Hawks would get on the board in the second period, however, as forward Scout Truman would score his fifth goal of the season. Despite this, UConn would score three minutes later off a shot from forward Tabor Heaslip and go up 3-1.

Zach Kaiser would give UMass Lowell life in the third period, as at 7:25 into the third period, he would score off an assist from defenseman Jon McDonald and forward Owen Cole to give the River Hawks their second goal and make the score 3-2.

Fearing another potential overtime with UMass Lowell, the Huskies would hold UMass Lowell from scoring and finish the game with a 4-2 victory after a late score in the third period.

The River Hawks are now 8-5 on the season, ranked no. 13 nationally, and sit at the fifth seed in the Hockey East. They fly out to Belfast, Northern Ireland for the 2022 Friendship Four, where they will begin the tournament against rival UMass Amherst.