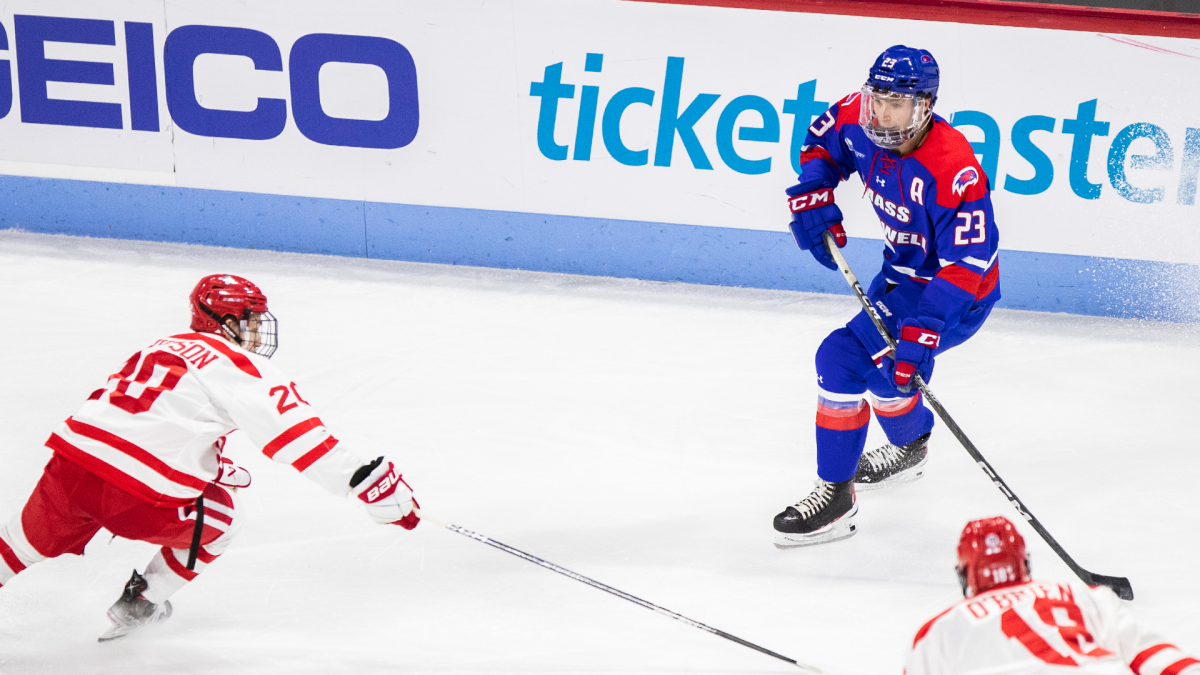 Friday night at the Tsongas Center was packed and filled with fans all dressed up, seeing as it was Halloween Night, where fans were encouraged to dress up and have fun with trick-or-treat stops scattered throughout the arena. After the pre-game festivities wrapped up, the national anthem was sung, and it was time to play some hockey.

Period 1: The first period was filled with aggression and intensity, and to add to the nature of this rivalry game, multiple penalties scattered the scoresheet throughout the period. The first penalty of the game was given to UMass Lowell defenseman Mark Korencik for interference. This was the first of two River Hawk penalties in this period. After UMass Lowell was able to kill it off, it was time to go on the power play, when Boston University defender Case McCarthy was sent to the bin for slashing. After that penalty, everything was quiet up until the closing minutes of the period. Boston University was penalized again when forward Dylan Peterson was sent to the box for cross checking. 25 seconds after that penalty, things began to get chippy, when both Boston University forward Sam Stevens was penalized for tripping and UMass Lowell forward Brian Chambers was penalized for roughing. After that, the first period came to a close.

Period 2: The aggressiveness of this game picked up right where it left off, and UMass Lowell was on the penalty kill again when forward Jake Stella was put in timeout for hooking. After that, things took a turn for the worse. Nearly five minutes into the second period, Boston University forward Devin Kaplan hit Marek Korencik from behind, which sent Korencik to the locker room. After further review, Kaplan was given a 5-minute major for hitting from behind and was also given a game misconduct. UMass Lowell capitalized on this when forward Scout Truman scored the game’s first goal, with the assists coming from defender Ben Meehan and forward Zach Kaiser. But the penalties kept on coming, as UMass Lowell forward Stefan Owens was called for hooking. Boston University was able to tie the game on the powerplay thanks to forward Luke Tuch. With a little over 4 minutes to go in the frame, Scout Truman came up clutch again, scoring a beautiful goal assisted by forward Matt Crasa and defenseman Jon McDonald.

Period 3: The third remained scoreless and the tension settled down, as both teams kept the focus on trying to win the game. After the final horn sounded, UMass Lowell took the first game of the series 2-1. UMass Lowell goaltender Henry Welsch stopped 32 of 33 Boston University shots, earning a .969sv% in the process.

The following night, the two teams traveled down to Agganis Arena, where Boston University hosted UMass Lowell. Once the introductions and pre-game festivities were complete, the game was underway.

Period 1: Both teams kept things quiet in terms of scoring. Despite many great attempts by both teams, no one could get past either goaltender. The only eventful event to happen was a penalty called on Boston University forward Jeremy Wilmer for holding. Other than that, both teams went to the locker rooms scoreless.

Period 2: For the most part, the second period was just like the first period. After a couple of UMass Lowell penalties (Matt Crasa for hooking, and Defender Gabe Blanchard for holding), UMass Lowell was on the board before the end of the period, as Matt Crasa scores his first of the year off assists from Brian Chambers and forward Owen Cole. UMass Lowell went back to the locker rooms in the lead, with the goal of taking this 2-game series.

With October in the rearview mirror, the River Hawks look to regroup next week, when Vermont comes down Friday Night.