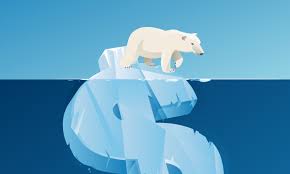 (Photo courtesy of YES! Magazine) “One of the most devastating impacts of climate change is the melting of the ice caps.”

So much climate change advocacy is based around change on an individualistic level. Endeavors such as reducing personal use of plastics, partaking in recycling endeavors and not littering are certainly important things to do for the sake of the planet. However, until the priority of focus shifts from individual changes to structural changes, the climate problem will not be solved.

Individualizing the climate crisis absolves these corporations of responsibility for the damage they have done to the world, and instead guilt-trips individuals for their relatively minor actions. While littering is never a good thing to do, a wrapper that someone leaves on the ground by accident is far less significant than the reliance and overuse of fossil fuels by the biggest companies in the world.

Pushes for environmentally friendly measures can sometimes also be counter-productive. Electric cars are theoretically better for the environment than gas cars due to the damages of gas emissions, but until the production of electric cars is also sustainable, it does not actually meet the bill for environmentalism. Instead, it serves as a way that wealthy people can feel good about what they are doing without actually making any lifestyle sacrifice.

Sustainable transportation should be public and electric, but the United States public transportation system is so dramatically broken and would require a dramatic financial investment to be brought to this sustainability level. The amount of money it would take to truly make this society sustainable is unfathomable to the political structures and corporations of the world.

However, in the capitalistic society we live in, this will never be possible. Corporations are allowed to act in whatever way they want with too much freedom, with no care for how it impacts the environment or the people of the world. True environmentalism that properly addresses the climate crisis will not be solved under capitalism.

Corporations and political structures would have to work together to create no-fund solutions to implement electric vehicles, remapping cities and creating more environmental structures. Under a strictly capitalist structure where governments must pay for every element of environmentalism, it would never be affordable. Instead of taking this as a reason to give up, it should instead serve as a reason for society to re-evaluate its relationship with money.

There is no reason anything needs to cost money other than for the purpose of limiting access to resources. While this is reasonable for things that are non-essentials, climate change absolutely needs to be addressed. Man-made obstacles, such as money, preventing the human race from survival is ridiculous. Until corporations capable of installing climate-friendly technology do not either lower or remove the financial barriers from doing so, or until the government chooses to pay the high price for them, they are both directly culpable for any climate-related disasters facing the planet.