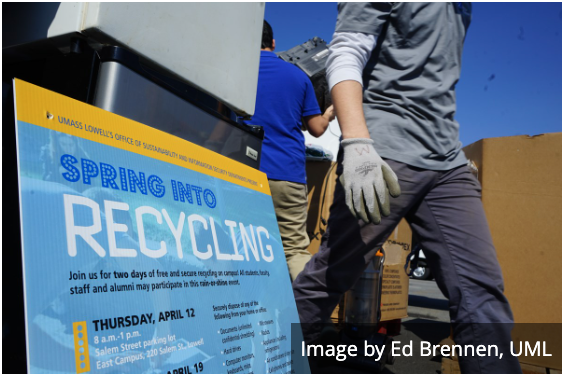 (Photo courtesy of Ed Brennen) “UML has made events centered around recycling in the past.”

More than just environmental experts are invested in keeping the world clean, including UMass Lowell professors who want to see more people recycling and want to see more changes at these places of work.

The three UMass Lowell professors are not experts in recycling; they are three English professors. They wonder why people are not helping the earth as much.

Keith Mitchell, an English professor at UMass Lowell, believes that it took some time for Americans to get the hang of recycling, and people do not do it as much today.

“The environmental movement began in the 1970s, where it did a great deal to advance recycling in the United States,” Mitchell says. “People are far more skeptical about the environmental benefits of recycling. Most Americans say they don’t recycle because it is inconvenient.”

Marlowe Miller, an English professor at UMass Lowell, taught a class about climate change because she was very concerned about it.

She believes that every company should make more packaging that you could recycle. She notices how good of a job the recycling the people of Lowell do. And her impression of people who do not recycle is not good.

“I want these products, but I will be damned if I’m going to contribute to the problems,” Miller said. “You can put out your food waste and your plastic recyclables. They will make sure they take it.”

“My impression is it not very terribly successful,” Miller says about if people recycle.

Rebecca Richards is an English professor at UMass Lowell and is a fanatic about recycling. And she also wants to see some more change around campus, including seeing more students recycling as well.

“I recycle and upcycle,” Richards said. Upcycling is when you take products that you have and reuse them to try to put some use into them. “I recycle even though I know statistics show that a lot of what we put in our recycling bins doesn’t get recycled.”

She would like to see an upgrade on the UMass Lowell campus because the school has a cafeteria and many places to get food.

“We have recycling and trash, but we do not have any waste bins for organic scraps, for example, food waste, which I would love to see,” Richards said.

She also believes humans are an exciting race because we hold a quantity that all humans have, which is inconsistency.