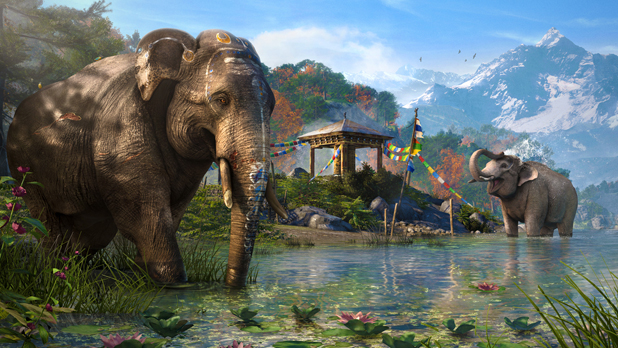 Disclaimer: Due to major issues resulting in the loss of my save data, I was not able to complete the game in time for this review. While I do feel confident in my opinion of the game so far, I will not be giving this game a final score as a result.

It’s rare to find a game that embraces total chaos as much as “Far Cry 4” does. From sprinting through an enemy camp, knifing everyone in my wake to killing wild animals with grenades and watching their bodies fly through the air, this game seems to have been built for the singular purpose of creating as many “wow” moments as possible. The result is one of the most beautifully realized worlds I’ve seen in a while coupled with rock-solid gameplay that makes almost every moment stand out. While I can’t say this game does everything perfectly, I am impressed with what I have seen thus far and am excited to jump right back into its violent and beautiful world.

“Far Cry 4” follows the exploits of Ajay Ghale, an American-born immigrant who’s traveling to the fictional Himalayan country of Kyrat in order to spread his mother’s ashes. His plans go awry, however, when he discovers that his late parents were the former leaders of an armed resistance against the country’s tyrranical ruler, Pagin Min, immediately forcing Ghale into the role of messianic figurehead of the rebellion and sworn enemy of Min’s regime. From there, you are tasked with helping the rebellious Golden Path wrest control of the country from Min’s clutches one region at a time, all the while trying to uncover the hidden mysteries of the country and learning the truth of what happened to Ghale’s father years before.

The plot, for the most part, is a mixed bag. While the story starts off fairly interesting with plenty of intrigue surrounding the founding of the resistance and the player’s relationship with Min, the story falls apart thanks to bland and poorly realized characters. Ghale himself is as bland of a protagonist as you can get, passively moving from one set piece to another with almost total ambivalence to everything that is happening around him. Most of the other characters aren’t much better, either ending up boring or adhering a little too closely to racial stereotype. Even Pagin Min, whose actions drive the entirety of the plot, is played for comic relief more often than not and, as a result, never seems to be that much of a threat.

The gameplay, on the other hand, is where “Far Cry 4” really shines. Fans of the previous game will feel right at home, as most of the gameplay mechanics and animations have been copied straight from “Far Cry 3,” though this is by no means a bad thing. Combat is as fast and fluid as ever, sneaking around enemy strongholds is even better thanks to smart level design and driving is vastly improved thanks to the new “Autodrive” mechanic. Part of me wishes for a little bit more enemy variety, as most of the enemy types are also copy-pasted from the previous game, though the few new enemies that it does introduce make up for this somewhat.

What impresses me most about “Far Cry 4” and, by extension, “Far Cry 3,” is how every activity present within the game feeds itself into player progression one way or another. While it’s true that you could play through most of the game without killing animals, animal skins can be used to craft essential new equipment, such as larger ammo pouches, extra weapon holsters, or stronger armor. While you could easily ignore the hundreds of collectables littered across the map, these collectables could be used for finding hidden side quests or unlocking that weapon upgrade you desperately need. Same goes for various colored herbs scattered around the land that can be used to create powerful performance-enhancing drugs, which may be useful in that next stronghold attack. The way every action the player makes plays its own part in the overarching economy gives an incredible incentive to do everything the game has to offer.

It also has to be said that the game looks absolutely beautiful. From the dense forests of Southern Kyrat to the mountaintops of the Himalayas, every inch of the game’s world feels alive and bursting with detail, which is impressive considering just how large this game is.

When it comes to the sound design however, there’s a lot of room for improvement. The voice cast for the game give generally average performances with the only standout being Troy Baker as Pagin Min. When it comes to the music, while most of the tracks fit the theme of the game, none are particularly memorable and some (like the game’s remixed version of “I Will Survive”) are just pretty bad. It’s not a deal-breaker, but coming off of the superb soundtrack of its predecessor, I was really expecting more.

Overall, “Far Cry 4” is a very well-crafted and entertaining game. While it admittedly borrows heavily from its predecessor and has a very weak overarching plot, neither issue detracted from just how fun it is to play. This is the type of game that leaves you blissfully entertained for hours on end and gives you ample excuse to brag to your friends about every amazing feat you accomplished throughout its 40-hour runtime… and I haven’t even mentioned the included two-player coop or the intense competitive multiplayer. “Far Cry 4” comes highly recommended to fans of the previous game and anyone who’d like to see the sights and take a walk on the wild side. Kyrat is waiting, if you’re willing. “Far Cry 4” is available on Xbox One, Xbox 360, PS3, PS4 and PC for $60.