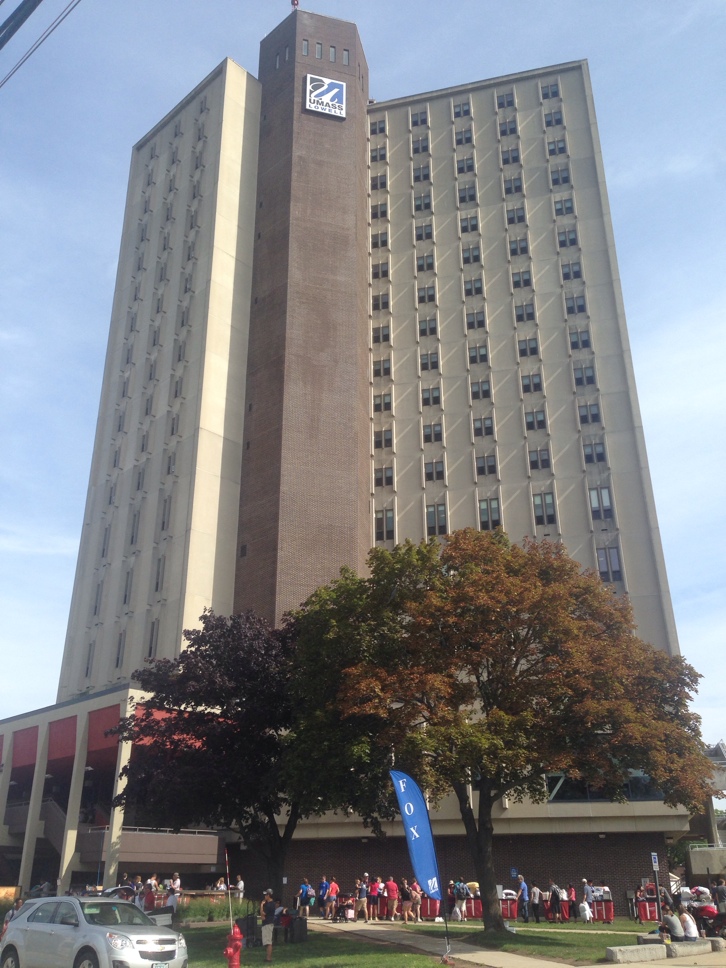 Anthony Repetti, a freshman computer engineering major moving into the 17th floor of Fox Hall, said he had a frustrating move-in experience Saturday afternoon. When asked about move-in, he summed it up in one word: “Awful.”

“Climbing the stairs sucked. I had to carry some of the stuff up,” Repetti said. That was his only complaint, but his father added that the two-hour wait was brutal. Neither seemed too thrilled about the remaining wait to get from the lobby of Fox Hall to the elevators.

Sarah Andrews, mother of Sabrina Andrews, who was meeting her roommates and therefore unavailable for comment, said “Move-in has been mostly smooth sailing. The space in the room is what she’s having issues with.” Andrews said that her daughter was in a quad on the 12th floor.

“It’s been very organized and orderly, and the staff has been extremely helpful and friendly. It’s been a long wait, but I was expecting it. With 800 kids moving into one building, it’s going to take time” Andrews said.

Lauren Michaels, a senior English literature major and Resident Advisor (RA) of three years, thought this year’s move-in was “the most effective so far.” Michaels contributed some of this year’s success to the three-day move-in process, with freshmen in Living Learning Communities, (LLC’s), moving in on Friday, non-LLC freshmen moving in on Saturday, and upperclassmen moving in on Sunday.

“I think every year it gets better. I just wish the line could move more quickly or we could get people to move out of the sun a little more, but I don’t think, because of how the building is built, it’s something we can do until we change the architecture of everything,” Michaels said.

A thirty second walk away from Fox towards the Campus Recreation Center, RA Erica Regan and Resident Director (RD) Andre Ifill were directing cars to the appropriate locations. Regan, a sophomore exercise physiology major, took a brief break to talk about her role.

“I tell people go to Fox, go to Leitch, go to the garage. Basically, stop the traffic from coming into this area. Yesterday I was doing the same thing at Sheehy, mostly directing cars, making sure everyone is in-and-out quickly, whatever it may be.

Overall, directing cars went smoothly. There weren’t any major issues or incidences, but according to Regan there was “Just a lot of traffic sometimes, some backup. It’s a one-way and Fox is kind of small so you can only have so many people at one time.”

Bourgeois RD Ifill said that this year’s move-in “was just as successful, maybe even slightly better” than last year’s.

“It was nice to work with great co-workers and a great leadship team who were always thinking of ways to improve upon move-in strategies and make us more efficient in terms of new things as an institution.”