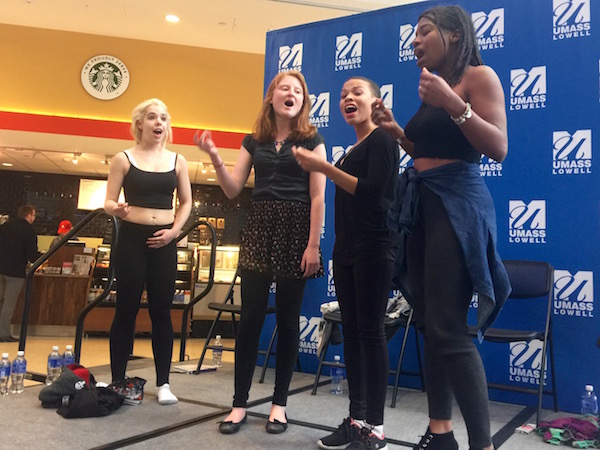 On April 6, four members of the feminist theater group Girl Be Heard performed poems, songs and narratives about victims of human trafficking in the University Crossing lobby. Following their performance, Jasmine Marino, a survivor of domestic sex trafficking, spoke about her experiences as a sex worker and the years after her escape. This event is part of UMass Lowell’s support and recognition of April as Sexual Assault Awareness Month.

“Sometimes girls are sharing their own narratives, and sometimes they’re not,” said Stewart. “That’s not really the important part. The important part is their talent and their honesty with that portrayal.”

One of the performers, Jesse Krebs, emphasized that the pieces performed were to give a voice to the voiceless. “It wasn’t an enforcement of one’s own opinion on the lifestyle, it was truly stories from the voices of the people,” said Krebs.

Another performer, Aimee Buchanan, wrote and performed a narrative called “Kentucky,” a story about a girl from a rural community who travels to a city to meet an online boyfriend and finds herself trapped in sex work.

“It was inspired by different people that I knew from rural communities that had fallen into this issue,” said Buchanan. “It’s all about making sure that they’re heard and doing them justice and to try to raise awareness.”

The performers were asked a question regarding how they hoped to bring this larger conversation to the context of a college campus. Buchanan responded by describing how some students have used online websites to date for money, and said that these can “turn into a forum of sex trafficking that can be common for people to try and use to pay their tuition.”

Tiff Roma, an Artistic Associate with Girl Be Heard, argued that educating our youth is the place to start when fighting this issue. “That’s a place for us to start, to bring sex education into our education system, and talking about the encompassing of sex trafficking and consent and rape culture,” said Roma.

After the Girl Be Heard performance, Marino sat on the stage to share her story. At 19 years old, her boyfriend at the time convinced her to participate in sex work for easy and fast money.

Marino emphasized that most people who become sex workers were already in a vulnerable situation. Many were either sexually abused or neglected in some way. “They say prostitution is the oldest profession. If they say that, they have to realize that childhood sexual abuse is the oldest oppression.”

She explained that the notion that women choose to become sex workers is inaccurate. “I know as a little girl I never dreamt of becoming a prostitute and junkie, and I really don’t think that any other little girl does dream that. Never in my whole time of being trafficked, or afterwards, did I meet a girl in the sex trade that said she enjoyed it.”

Marino explained that her boyfriend had groomed her by making her doubt herself. Before him, she explained, she wanted to be a journalist. “They size you up in minutes and know exactly what to say to make you gain love and trust for them, and then they use that against you,” said Marino.

At first, she wasn’t aware that her boyfriend was involved in trafficking. Then, after discovering her best friend was a sex worker, she told her boyfriend. He happened to know the man she worked for.

“He takes me to her house in Chestnut Hill,” said Chestnut. “Who would ever think there was a trafficker living there with about four or five women in this huge home with a fence around it?”

Eventually, her boyfriend convinced her to participate. For years, she was a sex worker living with her boyfriend in Boston and traveling to Hartford, Conn. to work in massage parlors. Later, she worked in Maine. By then, she felt trapped.

She was able to escape when she began servicing a man who did not ask for sex, but just to talk. She explained that she gave him her real name, and asked if he could be her reference so she could move into her own apartment. He said yes.

For many years after, she became a drug addict, and later returned to prostitution to afford the drug habit. Finally, she was able to get clean, and cited her relationship with a church as a huge help in her recovery.

“It’s really been my faith that has been my anchor, and has really helped me stay grounded and stay connected.”

“If you come across someone who shares that she’s being trafficked, don’t judge. Offer to be a safe and supportive person and love her for where she’s at,” said Marino.

Now, Marino is a mother of two and works as a mentor to help young girls in the same situation she was once in. She began speaking publicly about her experiences only four years ago. Marino started her own organization called Bags of Hope to aid young women in these situations.