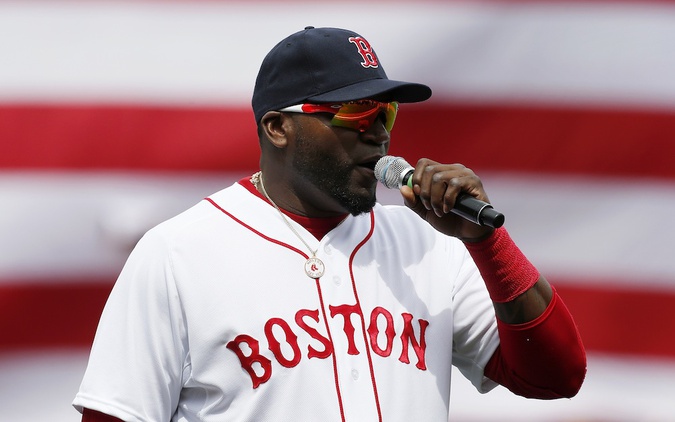 Red Sox slugger David Ortiz brought the fans of Fenway to their feet after a passionate speech in the wake of the Boston Marathon bombings. (Photo courtesy of The Wire)

I’m often asked why sports float my boat, but the answer isn’t so simple. Being from the Boston area it is assumed that the winning culture had drawn my attention – nine major sports championships since the turn of the century will do that. But growing up a Cubs fan, when the last time they won a World Series the Ottoman Empire was still in power, it has been more about the healing that sports do in times of misfortune that coaxed my romantic side out.

During a hectic childhood that left as soon as it arrived, sports were the only constant. When other nine-year-olds were watching Saturday-morning cartoons, I was more concerned with who was going to round out the Cubs’ rotation – Shawn Estes tried his best. The 2003 season was my first taste of a title run on the North Side of Chicago, it was the same year my mother contracted lung cancer.

Behind Sammy Sosa’s forty long-balls and Mark Prior’s 18 wins, the Cubbies won 88 games and captured the NL Central – something they had not done since 1989 when they were in the NL East. With a deep rotation and talented guys all around the diamond, it was finally time for the Lovable Losers to end the, at the time, 95-year-long drought. The north side needed this; the Salucco family needed this.

In the NLCS, the Cubs’ had a 3-1 series lead – it was happening. After a loss in the fifth game of the series, I was still confident – they had only lost three straight four times during the regular season and I had no reason to believe it would happen again. Then, Steve Bartman happened. With five outs away from the first World Series birth since 1945, the Marlins’ Luis Castillo hit a foul ball to the left field wall. As left fielder Moises Alou attempted to make a play on the ball, so did Bartman – and the rest is history. The Cubs lost game six after an eight-run eighth inning by the Marlins and couldn’t win game seven.

Despite the disappointment, the North Side Nine helped me in 2003. Although I knew what was going on with my mother’s health, I wasn’t able to grasp the severity of such an event. Looking back, at a wise 22 years old, I realize I needed a distraction; something to take my mind off of reality. For a few hours a night, it was the friendly confines of Wrigley Field that did that. Sure, my view was a box television set while sitting on a plastic covered couch, but that plastic felt like sitting behind the first base line with a bag of Cracker Jacks and a souvenir baseball cap filled with vanilla ice cream.

The power of sports is a beautiful thing. Don’t just take my word for it; ask a couple of cities across the United States. The resiliency of New York City and Boston are all stories similar to my own, but instead of a small, blue-collar family worrying about the health of their monarch, it was entire communities tuning in every night to escape the pain and anguish this world had left them with.

The first sporting event in New York City after 9/11 was ten days later on September 21, 2001 – the Atlanta Braves were visiting the New York Mets. 41,235 people filled Shea Stadium at 3:07 p.m., and not one of them were rooting for a team – they were rooting for an entire nation. In the bottom of the eighth inning, with one swing of the bat, an entire city was healed. Mike Piazza had taken a Steve Karsay pitch to straight away center. It wasn’t only important for fans, but the players knew just how much it meant as well.

Atlanta Braves’ Chipper Jones was on the field that day. Jones was a guy that Mets fan couldn’t stand because of how badly he beat them over the years. He was a thorn in the side of the Metropolitan area so much that he even named his son Shea after the stadium where he did his damage.

When asked if he minded losing that game he said, “We didn’t mind it a bit. We thought it was our duty to go out and take a city and a country’s mind off something terrible that had happened. If it was up to us to go entertain people for three hours, then that was our way of giving something back.” And that is all I ask out of these athletes – please, please take my mind off of things.

Everybody knows where they were on April 15, 2013 – the Boston Marathon Bombing. I was in the same seat at the same coffee shop as I was when I wrote this article. A girl next to me broke into tears and grabbed on to me. I had no idea who she was and no idea why she was doing this. Then she told me what had happened and that her parents were watching at the finish line. The only thing I could think was, “the Sox have to play.”

They were on a road trip and weren’t scheduled to play at Fenway until the 19th against the Kansas City Royals. With the city still fearful, the game was postponed. I was not happy – I needed that game to be played, this city needed that game to be played. When they played on April 20th, David Ortiz, wearing a jersey that read “Boston” instead of “Red Sox,” agreed. “This is our [expletive] city.” When Neil Diamond made a special appearance to sing “Sweet Caroline,” let me tell you, good times never seemed so good, so good, so good.

The power of sports knows no bounds. I do not know many things in this world that can captivate people in times of tragedy like they can. The way they have healed myself, along with countless other individuals, if only for a few hours, is truly euphoric. It’s all put into perspective, however, because I would rather have my mother than a Cubs World Series.