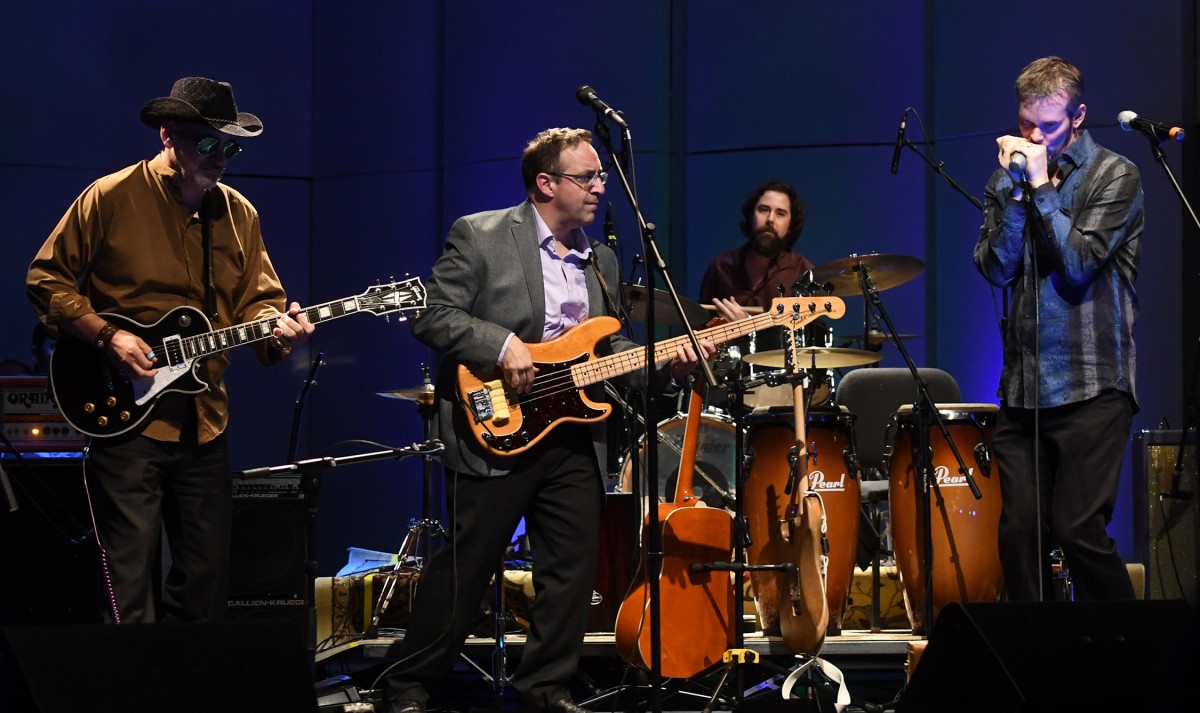 Faculty members, students and colleagues of the music department put on quite a show at the Chancellor’s Celebration of Music, covering many genres including classical, folk, pop and blues.

On Friday, Sept. 23, professors, staff and students put their talents on display at Durgin Hall. To kick off the event, Sovann Khon played a piece titled “Laolik Bey Chon” on the tro sau, a Cambodian instrument. It is a stringed instrument that sounds a bit like a violin.

With a large Cambodian population in Lowell, having Professor Sovann Khon perform was very special. He is a master musician, specializing in Mahori, which is the traditional folk music of Cambodia. In addition to knowing many instruments, Khon directs Vong Pleng Khmer, the UMass Lowell Cambodian ensemble and works with the Angkor Dance Troup.

Following Khon, Professor Alan Williams, the chair of the music department, performed with his folk band Birdsong at Morning. Faculty members Christopher Lee and Andrew Fordyce played percussion with the group. They were also joined by the Lowell String Quartet, which featured students of UMass Lowell as well as recent alumni.

They played two songs which were sung by Williams. The strings added a nice touch combined with the powerful percussion. In addition to singing, Williams also played the lead guitar. Harmony vocals were provided by Darleen Wilson, also on guitar, and Greg Porter, who also played bass.

Faculty member Janet Welby performed a piece she composed entitled “Loons.” She was accompanied with a flute, clarinet and piano, which all joined together for a wonderful, classical piece.

Lecturer Ramon Castillo took the stage next with Lee, who was again on percussion. Castillo earn a doctorate in composition from Boston University after using his programming knowledge to help him learn composition.

Castillo’s performance was very distinctive. One of the few visual based performances of the night, the screen behind them displayed a symmetrical video that moved in sync with the music. The images were actually of Castillo playing. It is better to see it to actually understand what was occurring, but it was a very interesting and unique performance.

John-Morgan Bush, a lecturer at UMass Lowell and the director of the UMass Lowell String Project, lead a performance of “Summer Music for Wind Quintet” in the next presentation. Several faculty and staff members with various instruments joined him. Amy Dinsmore played the oboe, Rebecca Leonard was on clarinet, Stephanie Busby on bassoon and Susan Jackson played the flute.
The combination of instruments was very interesting and worked quite well together. It sounded like a movie soundtrack, with intense moments of playing followed by softer and calmer periods.

Bush has played with symphonic orchestras all across the country and his talent was very evident. While all the musicians joining him were incredibly talented, Bush was in control and seemed to take the lead of the group. With pictures displayed behind the performers, it was very easy to get engrossed in the moment of their harmonious playing.

As the night progressed, it was evident that the evening was about showcasing various genres of music with many combinations of instruments. The drums were used in multiple different ways in certain performances, as were many string instruments.

Nearing the end of the event, the next group picked up the pace with more of a blues performance. Garrett Michaelson played the trumpet, Seth Bailin on the saxophone, Andrew Fordyce played the drums, Charles Gabriel was on bass, and Mark Michaels played the guitar. Each group member had their own solo during the performance, so they were each able to show off their talents. They were just as impressive as a whole. They worked really well as a group and seemed to be encouraging and gaining energy from one another.

The next performer, Aaron Rosenberg, played an interesting piece on a toy piano. He played an original piece that was quite impressive, considering the size of the instrument. Rosenberg would progressively get louder and then softer, which gave the whole performance a powerful feel.

To close out the night, the energy continued to remain high with another blues-based group. John Shirley played the harmonica and was joined by Ricky Berger on the guitar, Andrew Fordyce on the drums and Charles Gabriel playing bass. They played three songs that were emotionally fueled and Shirley sang with a lot of power, getting very into the performance, making it all the more enjoyable.

Overall, this event was a great way to hear and see the capabilities of UMass Lowell’s students and staff. With a variety of genres, there is something everyone can enjoy. Performance-goers may also discover new instruments they may not have known about before, such as the tro sau.

This event was important to the UMass Lowell community, as proceeds from the event go towards student scholarships. As Professor Williams noted in the beginning of the event, there will be more performances throughout the year, as this is a four-part series.