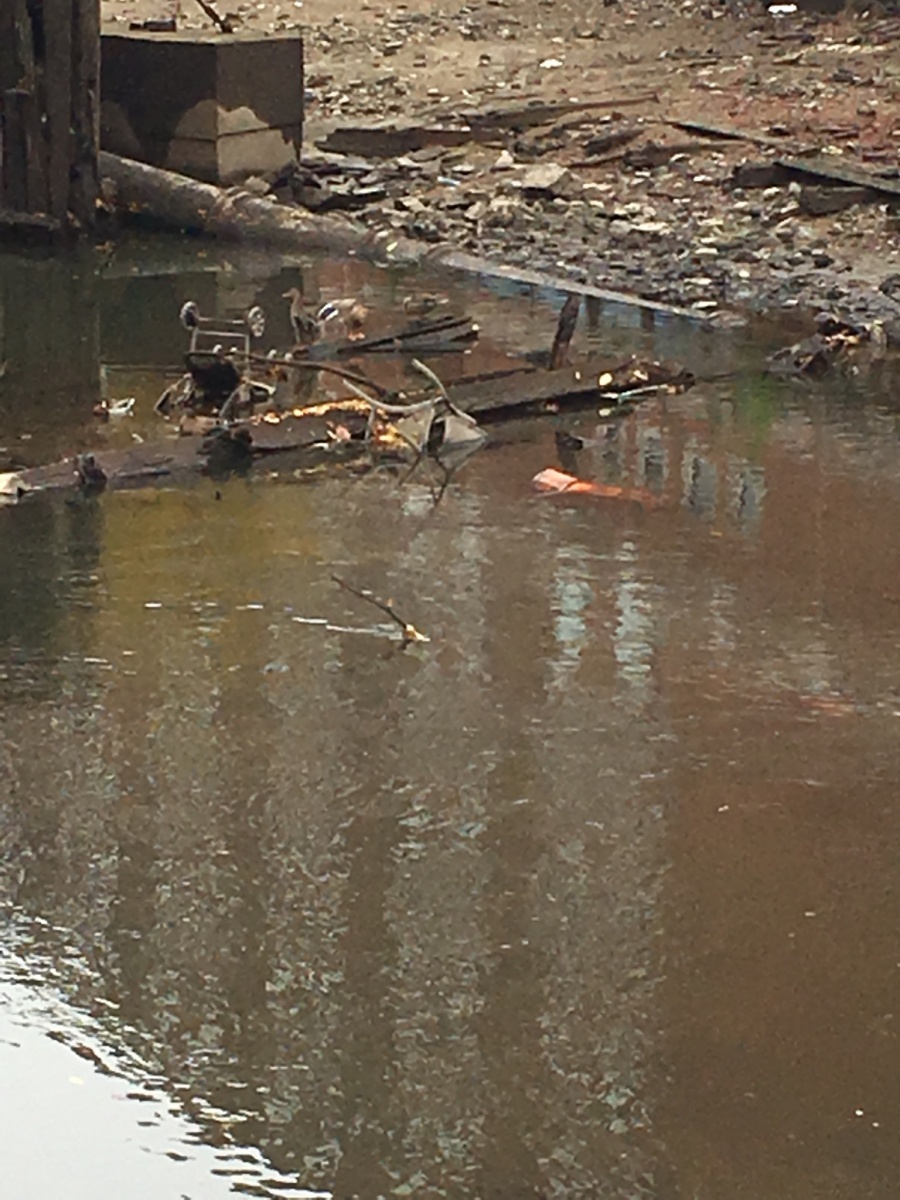 Trash and other waste pollute water in the canals of Lowell. (Taylor Carito/ Connector)

When the water levels of the Merrimack River in Lowell are at a high point, the Pawtucket Canal which stretches throughout the city is drained to prevent overflows.

During this period, locals of the city and students at UMass Lowell witness the sight of the barren canal similar to its previous drainage: a wasteland of trash. Locals of Lowell say the scene looks like “a depressing sight to gaze upon” while UMass students echo their viewpoints and believe it should not be the hardest thing in the world to manage.

Lori Weeden, a professor of the Environmental, Earth and Atmospheric Sciences department for UMass Lowell, has expressed similar feelings towards the canal’s appearance. “It makes me sad,” Weeden said. “It has such an amazing potential to be a beautiful waterway.” Each year, tons of trash finds their way into the canal either by act of nature or illegal dumping.

Since the canal littering issue rose, the community has taken strides to organize volunteers to clean up parts of the canal. Carolyn Mecklenburg, stewardship and education manager of the Lowell Parks and Conservation Trust, has said how grateful the city of Lowell is for the work she and the organization has done preserving spots all over Lowell, including cleaning works such as the River Meadow Brook and the Concord River. She too felt the trash in the canal has deprived the beauty of the city at times. She even said how it has affected wildlife in the waters, mainly fishes. “Foreign objects are introduced into an ecosystem, it’s not going to be very helpful for the life that’s there,” says Mecklenberg. In addition, the trash taints the water in the canal making it undrinkable.

Apart from the Lowell Parks and Conservation Trust, the Lowell Canalwaters Cleaners, a non-profit organization established with local volunteers and students alike, take the time to go into the Lowell waters and extract as much debris from the rivers as possible yearly with much success as they post the results of the clean ups on the Facebook group and calls on the help of others to aid them in their mission to sanitize the waters of the canal.

Unfortunately, just because people notice something is wrong, that does not mean they have the right to take the task on themselves, especially when it comes to legal territory. Boott Hydropower, LCC, the company which privately owns the Pawtucket Canal, has never felt comfortable with volunteers cleaning the canal as mentioned in a letter written to the city in 2005 stating that they would no longer tolerate the efforts as Jonathan Dollard, Boott project manager, said, “Doing so will be considered trespassing and BHI will take appropriate action to prevent unsafe activities.”

Despite the warning, the LCC continues to clean areas of the canal privately owned without any known charges against the group. Although the letter was written more than a decade ago, it can still apply today as Prof. Weeden elaborated on the company’s viewpoint. “They’re more worried about the liability if somebody gets hurt.” Students and locals alike bring up a valid point that since the company owns the canal, they should bear the responsibility of maintaining it. Sadly, for the company, it’s easier said than done as there would be more to it than just climbing down and remove every piece of debris from the soil. It would involve a huge budget to drain the canal longer than the usual period and even if successful in extracting trash from the canal, it would have to be closely monitored to prevent more trash flowing in which is not fully guaranteed in the long run.

Despite these shortcomings, the canal is much cleaner than it was 20 years ago and cleaning it even further would have positive benefits such as boosting the waters vividness, increase tourists activity and even increase enrollment at UMass Lowell just by the beautiful sight of these locations which Lowell has been remarkable for improving the appearance of such colorful locations.

Meklenburg sees the potential of improvement for the waters from a hopeful standpoint as does Prof. Weeden, seeing a possible collaboration with the support of UMass Lowell as well as the owner of the canal and local businesses as they could be the source to the solution. She also noted that it could take much time and patience for a large-scale cleaning to happen. She says “Until you have the buy-in of all of those groups, it makes a difficult process.” UMass Lowell also encourages students to get involved with local organizations to help with the beautification of the city. “I think there would be a lot of benefit both to the city and the university,” Weeden said, “It would attract more people to the school.”

The issue has gone unnoticed to the general population, but when acknowledged does inspire change. More and more people are getting involved and are encouraging others to do the same. Many people are striving to make the canals cleaner and the city better.