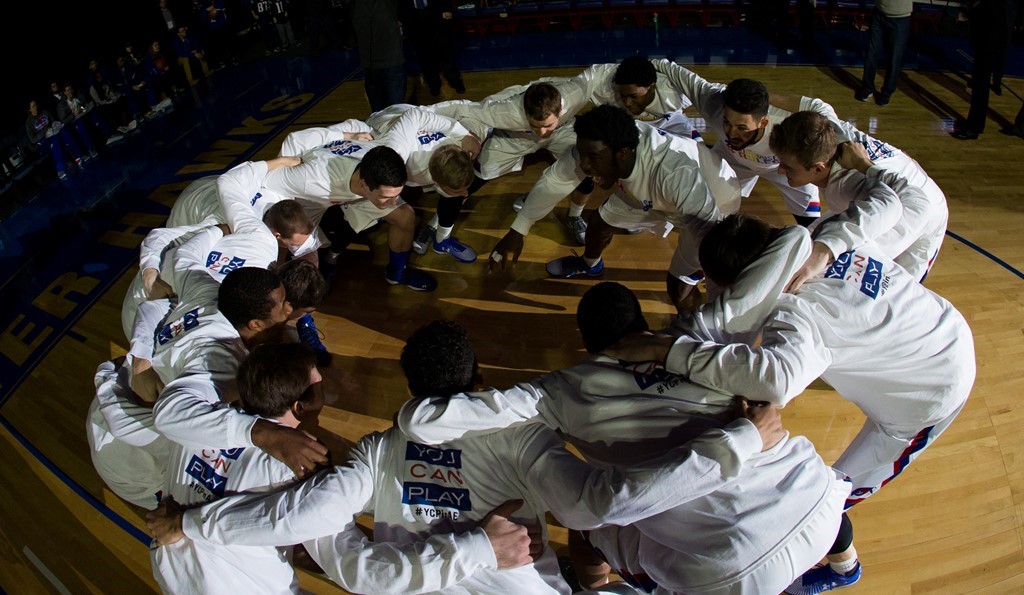 Basketball season is officially back, River Hawk Nation. Once again it’s time to lace up and ball up on all 94 feet of that polished hardwood.

This year, the men’s basketball team is coming back stronger, smarter, and more experienced with 10 returning players to the team’s roster.

“We were the third youngest team in the country last year, so it’s nice to have some guys come back with experience. It’s one of the first times since I took over the program that we’ve been in that situation,” said head coach Pat Duquette.

It’s Duquette’s fourth season as the River Hawk’s head coach and this year the team has the fewest number of freshman players he’s seen since he started coaching in 2013. In 2014 the team had eight freshmen on the roster; in 2015 it had seven. This year the team only has three.

With 10 returning players on the roster, including the 3 top scorers from last season (junior guard/forward Jahad Thomas, sophomore guard Isaac White, and junior guard Matt Harris), it might be easy to overlook the new talent. But coach Duquette was quick to express his enthusiasm for his new team.

“We’re also excited about the three new guys that we have coming in and [we] feel like they’re ready to contribute as well. We feel like we have more talent and depth than we’ve ever had in the program,” said coach Duquette.

The three new freshmen on the roster –  guard Rinardo Perry, guard/forward Stefan Borovac, and forward Cameron Wolter – certainly have something to prove coming into such a veteran team.

“Each kid’s different. Some kids are ready right away and are just fearless and jump right in. Other kids take time to either learn your system or to develop the confidence that they need,” said coach Duquette.

Coach Duquette showed enthusiasm for the future. “I’m fully confident that all three of our freshmen are going to be really good players here,” he said.

The freshmen are definitely going to have to step up along with the 10 returning players if they want to make an impression this year, especially when facing new opponents like Indiana, a Big Ten conference team ranked 19th in the country.

It is important to note that Coach Duquette and the River Hawks have exceeded expectations all three years they’ve been together. The confidence the team has brought to the table is what helped bring the River Hawks to a sixth, fifth, and another fifth place finish in the last three seasons, all while being projected to end up last.

This year, finally obtaining some of the respect they rightfully deserve, they’re projected fifth.

“We have far surpassed everybody’s expectations in our first three years in Division I. And this year it’s a credit to our players and the success they’ve had,” said coach Duquette.

Proving the team’s worth this year is going to be huge, since come next year the team will be fully eligible to compete in the conference tournament and will also have the opportunity to play in the NCAA Tournament. Coach Duquette assures students that the team is on the right track to success.

“I think the students can be proud of where their men’s basketball program is… we’ve got just about everybody returning next year. So we feel like we’re in a good position to get to the top of the league and to be competitive when we’re NCAA eligible,” said coach Duquette.

The River Hawks, of course, are nothing without the passion and the support of the student body. Getting as many wild and crazy-passionate fans to the games is what makes it all worthwhile on the path to success.

Coach Duquette says that he hopes that nobody undermines this and the importance the student presence can have on the road ahead.

“We love their support at our games. It means a lot to our players and [while] it’s important as we’re building our program on the floor, it’s just as important to build it off the floor,” said coach Duquette.