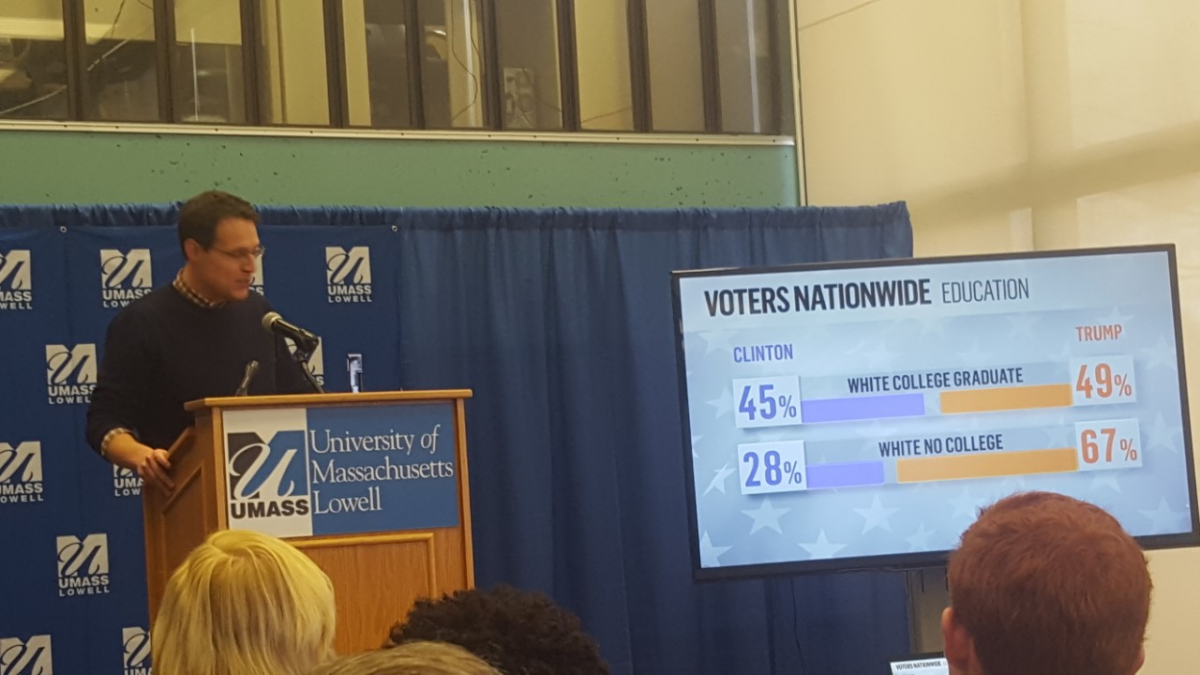 The media’s and polls’ generally inaccurate prediction of the 2016 presidential election could not have prepared the country any less for what was to become of the U.S. presidency.

MSNBC Political Correspondent and former UMass Lowell student, Steve Kornacki addressed the evident post-election shock and confusion in the on-campus discussion Election 2016: What the #&*! Happened. The discussion cleared up some confusion on erroneous polls, incorrect predictions and the Electoral College.

Kornacki is an anchor for the 4 p.m. MSNBC news coverage who frequently provided analysis of voting patterns, exit polls and electoral data over the course of the months leading up to the election. The UMass Lowell Center for Public Opinion, the Office of the Dean of Fine Arts, Humanities and Social Sciences and the Political Science Department hosted the discussion on Dec. 2 in the O’Leary Library Mezzanine.

During his speech, Kornacki explained how the distribution of President-elect Donald Trump’s voters and Sen. Hillary Clinton’s inability to perform exceptionally among nonwhites, in a further diversified U.S., was critical in his winning of the Electoral College. Clinton’s margin of victory was smaller than President Barack Obama in the Latino, Asian and African-American voter demographics. Another unexpected result was that Clinton did not win college educated whites, a demographic that usually votes Republican, but was expected to be driven away by Trump. Kornacki reported that Mrs. Clinton also did not accumulate as much of the female vote as expected.

According to, Kornacki, Trump’s supporters were more enthusiastic and in just the right places with just the right tightly packed density to win more of the electorate than Clinton.

Kornacki offered an explanation of the night of Nov. 8, saying that he “went into election night with the same expectation that just about everyone had.” It was not until around 9 p.m. that later results came in from Florida, beginning to show an unexpectedly small lead by Clinton over Trump. “I couldn’t find one particular county where this was coming from,” said Kornacki. He later realized that Trump was generating a sizably larger turnout than expected. “The Democrats got good news out of their three counties, but the Republicans were getting good news everywhere else,” said Kornacki.

He said how similarly, unexpected results were being shown in the state of North Carolina, where Clinton had retrieved the summation of her support while Trump was still accumulating votes. He said, “That wasn’t what the exit polls said was going to happen.” According to Kornacki, polls of the state of Virginia were also wrong, as Clinton was expected to win this state with ease. “It’s that feeling of every expectation and assumption that you’ve made just dissolves on the spot,” said Kornacki.

While Americans may have been shocked by the results of the election, the UMass Lowell campus community continues to move forward.

David Todisco, sophomore political science major and founder and president of UMass Lowell’s College Democrats expresses his optimism for the campus moving forward. He said that although he saw “a lot of sadness and concern in people’s faces after the election,” he also saw “a lot of faculty taking measures to unite the campus.” He  has positive expectations for the Democratic Party. “There’s been a lot of discussion about how to move forward and oppose legislation, so I think we’re really looking at how to work with this as a party,” said Todisco.

Kornacki, a native of Groton, Mass., presented MSNBC’s coverage of an internationally recognized poll from the University’s Center for Public Opinion that found that almost a quarter of millennials would prefer a meteor strike to the 2016 presidential candidates.