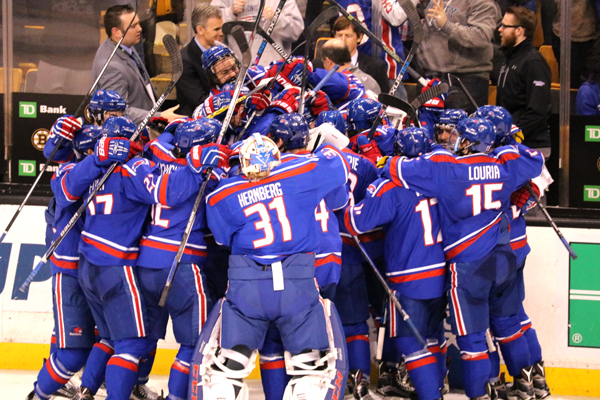 The last time these two teams took the ice against one another came in the semifinals of last year’s Hockey East Tournament. In a game that lasted a total of four hours and 21 minutes and produced over 112 minutes of ice time, the River Hawks prevailed in triple-overtime behind a goal from senior captain A.J. White.

After a 2-1 victory at Massachusetts on Saturday, the River Hawks improved their overall record to 15-5-3 to go along with a conference record of 7-3-1. They currently sit in third place in Hockey East.

The Providence Friars, however, find themselves in the middle of a down year with a conference record of 2-6-2 and an overall record of 10-8-4. After appearing in the NCAA Tournament each of the last three seasons, winning it all in 2015, the Friars are currently slated in ninth place in Hockey East.

Junior forward Joe Gambardella leads UMass Lowell in total points with 33 (11 g, 22 a), which is good enough to be tied for seventh in the nation. Gambardella has tallied nine of his 33 points in his last five games.

Seeing a River Hawk in the upper echelon of scoring in the country is somewhat new, but a dominant goaltender is what UMass Lowell fans come to expect.

Freshman netminder Tyler Wall has solidified the starting job by posting a 14-4-1 record, a 1.84 goals against average and a .927 save percentage. Wall ranks in the nation’s top 11 in each category.

Sophomore Hayden Hawkey has been between the pipes for Providence this season. He owns a 10-8-4 record, 2.25 goals against average and .908 save percentage over 22 games.

The River Hawks have a record of 5-2-2 against USCHO top 20 teams, headlined by two ties with fourth ranked Minnesota Duluth and a series sweep of twelfth-ranked Vermont. Although the Friars have accrued a record of 3-5-1 against top 20 teams, they recently defeated and tied the second ranked Denver Pioneers as well as the sixteenth ranked St. Lawrence Saints.

Providence leads the all-time series between the two teams 54-47-11. In the last 10 meetings each team has won 5 games apiece. Head Coach Norm Bazin boasts a 9-8-0 career record against the Friars during his tenure at UMass Lowell.