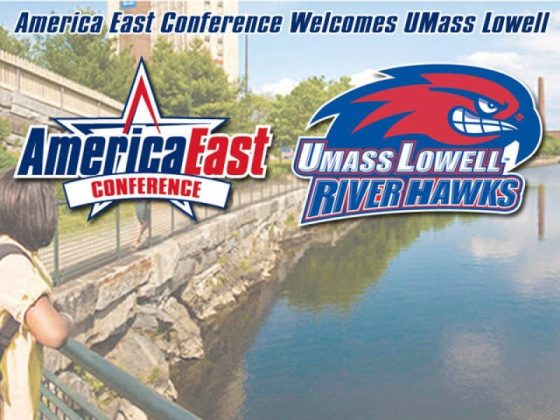 UMass Lowell was added as the conference’s ninth member for the 2013-14 academic year. (Courtesy of America East)

Turning point — a time at which a decisive change in a situation occurs, especially one with beneficial results. In February 2013, UMass Lowell announced that all of its athletic teams will compete in Division I as a part of the America East Conference. For most, a turning point yields immediate results. For UMass Lowell, they were required to go through a mandatory four-year transition period when they made the leap to Division I.

This rule is in place to help universities adapt to the changes in complexities of being a Division I program. Do I agree with the rule? The short answer is no, I do not. However, after observing the various teams’ ups and downs on their perspective playing surfaces, it is more beneficial than it seems.

With the UMass Lowell hockey team being at the D-I level when they joined Hockey East in 1984, the university was no stranger to how things worked. The transition period also allows the university to fast track a team after two years. Given the D-II success of the field hockey team, it was no surprise that Shannon Hlebichuck’s squad got the nod. They competed in their first conference championship tournament this fall season.

Going into this academic year, these two teams were the clear outliers. Looking at the success of the teams during this transition period, you would be hard pressed to find one with a legitimate gripe regarding no postseason play. That was until the men’s soccer team put on a show this season on their way to the first America East Regular Season Championship.

This caused a bit of local uproar because, by NCAA rules, they were not permitted to play in their conference tournament or the NCAA tournament. A team that finished 13-1-2, as high as 11th in the nation and as high as 4th in the RPI was not allowed to compete in postseason play. As Stephen A. Smith would say, that is just blasphemy.

But as I stated before, there will always be teams that find success at the D-I level quicker than others. As much as UMass Lowell die-hard/fan boy I am, there is no denying that, for most teams, the transition period has proved difficult. Volleyball is a perfect example of that.

With a record of 14-102 over the 4-year transition period, talent has been the issue. The young core of Lindsey Visvardis, Haley Shimon and Madi Bell will undoubtedly turn the tide in the coming years as they gain more experience facing top competition. Every program needs something to build upon, and I think this team has found its pillars.

Rebuilding is one thing, but creating something from scratch is something entirely different. 2015 was the first year UMass Lowell offered lacrosse since 1989, and only a men’s team was fielded. A combined 6-58 record between both men’s and women’s does not look good, but they are in the hardest position of any sport.

Moving over to the diamond, softball has struggled. With an overall record of 41-105 they are looking to go over .500 in their final season of the transition period. Baseball has also struggled to get above .500 but have a more respectable record of 57-80 over their first three seasons in D-I play.

The teams on the hardwood have had to deal with more than just the transition; they are trying to make the Tsongas Center a permanent home. The latter of the two will take some time, but the former has treated both teams well. With the perfect man for the job, Pat Duquette, the men are floating just under .500 in conference games over three-and-a-half years of D-I play while the women sprinkled in a fourteen-win season in the 2014-15 season. Both teams have had impact freshman in the past two seasons headlined by Isaac White, Ryan Jones and Megan Hendrick which speaks to the appeal of UMass Lowell.

Women’s soccer has made strides in each season since the transition. After a 1-16-1 in year one, they have since combined for 16 wins over the last three seasons. With the team searching for a new coach, the baggage of not being playoff-eligible is no longer an issue.

Behind Gary Gardner’s leadership, the cross country/track and field teams have taken off over the past two seasons. After being regionally ranked for the first time over the fall season, bigger and better things are on the horizon.

All of the athletics at UMass Lowell will benefit from being playoff eligible. Not only will more fans be interested in showing up, but the allure of coming to a program with no playoff restrictions will be enticing to recruits. Of course this is all set to happen when I graduate. Grad school, here I come.